USA vs. Canada Olympic Soccer Tips and Predictions: USWNT Are Favorites for a Reason

The USWNT have been up and down throughout the Olympics but remain the betting favorite to win gold going into their semifinal match with Canada. Check out our tips and predictions to find out if we think they can win and guarantee themselves a medal.

They may be gold medal favorites but the USWNT first needs to overcome Canada in the semifinals of the Olympic Soccer tournament.

We’ve seen the greatness of this team before but after a mixed Olympics will they be able to win on Monday and guarantee a medal?

Find out with our USWNT vs. Canada tips and predictions.

The game will take place on a warm Tokyo afternoon with temperatures expected around 86 degrees Fahrenheit. With rain likely that morning the pitch should be in great condition.

It’s been an interesting Olympic Games for the USWNT with the team failing to live up to the immense expectations on them. Despite some mixed performances, they’re still the odds-on favorite to win the gold medal at +110, with bookmakers believing that Sweden are their only real competition.

The Swedes are +175 to win gold despite beating the USWNT 3-0 earlier in the tournament. The two teams are expected to meet in the final if the USA overcome Canada on Monday, with Sweden facing Australia later that day.

Before they can start to think about Sweden they’ll need to defeat Canada, and they’ll be confident in doing so, despite only defeating the Netherlands on penalties.

A shocking 3-0 defeat to Sweden in their opening game set off warning sirens but a 6-1 demolition over New Zealand did much to appease those doubts before a 0-0 draw against Australia, which again raised concerns.

They defeated the Netherlands on penalties in a thrilling game Friday, which finished 2-2 at the end of regular time. Momentum switched throughout the game but ultimately when it came down to a shootout it was the USWNT and their experience which took them through. With four goals ruled out, it felt like it might not be their day, but cometh the hour, cometh the woman.

She has her critics but when Megan Rapinoe stepped up to take the decisive penalty you had no doubt on what the outcome was going to be. This team may have played poorly at times but they have the ability to turn it on, and they have the experience and self-belief to not let pressure get to them.

Friday’s game saw the best and worst that the team has to offer, but there’s no shame in having occasional struggles against a Netherlands team packed with real quality, including the sensational Vivianne Miedema, with the Arsenal forward scoring both of her team's goals.

United States goalie Alyssa Naeher saved one penalty in regular time and then two in the shootout and her presence in net was a huge boost to her side. Some of the attacking play was brilliant, even if they gave away the ball too much at times. More concerning was the defense in front of Naeher, as the group allowed the Netherlands a lot of space and freedom to attack, something they can’t continue to allow.

Canada will be hoping that the USA team that turns up on Monday will be the one we saw earlier in the tournament. Unfortunately for them, it feels like the USA are just heating up and you could see by Rapinoe’s penalty and celebration that they believe the gold medal is theirs to lose. Now that we’re at the business end of the tournament we’re likely to see them come into their own, and I wouldn't want to bet against them.

To upset the odds Canada will look to attack the USA’s flanks. Leftback Crystal Dunn is the USA’s weak link and, by isolating her with pace, Canada may be able to get inside and give Becky Sauerbrunn and Abby Dahlkemper problems, something we saw regularly against the Netherlands.

Despite their best efforts, I think this will be a game too far for Canada, who deserve credit for getting to this point and beating Brazil in the process. At -154, we’re getting good value on the USWNT moneyline.

When looking for another wager for this game there is one that really leaps out... backing the USA to win by a single goal.

We’ve already discussed their struggles but it’s important not to forget that despite thumping New Zealand and scoring two in the quarters, they did go goalless in two games.

Canada, on the other hand, have been far, far tighter in their games. They’ve averaged a goal scored per contest but they’ve only conceded three goals in the tournament’s four games so far. Brazil couldn’t find a way past them and they kept things very tight against Japan, Chile, and Great Britain. Their game plan is a simple one — they look to stay strong and compact defensively, and then strike. That’s probably the best way to play against this USA team and it could potentially cause them problems.

By sitting back and trying to set traps for the USWNT, they’ll hope to use speed to break on the counter and they could potentially score. More importantly for this wager, they won’t concede many goals because they’re unlikely to throw many bodies forward.

With the pressure and importance of this game it’s likely we’ll see a cagey start and I’m confident that it’ll be 0-0 at halftime. I’d expect the big game experience combined with the talent on the USA bench to be the difference-maker in this matchup, with the USWNT scoring in the second half. I think it’s likely to finish 1-0 but by backing the USWNT to win by 1 goal it gives us an insurance policy in case Canada does score. At +275, it’s also great value. 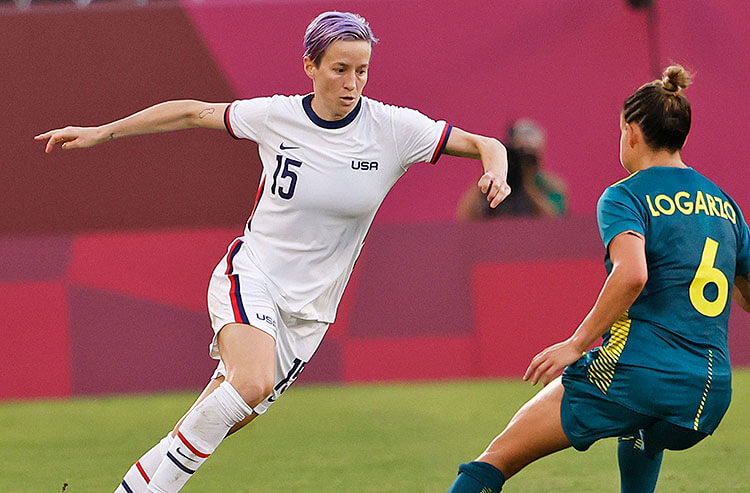 USA vs. Canada Olympic Soccer Tips and Predictions: USWNT Are Favorites for a Reason
Provided by