Tampa Bay star forward Nikita Kucherov was smothered in the opening games of the Stanley Cup Final against Colorado's top players. He should get a chance to face easier matchups at home in Game 3 — and our NHL picks explore how to cash in on Kuch.

After being outplayed in a Game 1 overtime loss, the Tampa Bay Lightning were blasted by the Colorado Avalanche to the tune of 7-0 in Game 2 in the Stanley Cup Final.

Tonight's Game 3 sees the Bolts return to Amalie Arena. The old adage is that you're not out of a series until you lose at home, but Tampa Bay needs to deliver a much better performance — starting with superstar Nikita Kucherov.

The unquestioned offensive leader for Tampa Bay over the last three postseasons, the Russian winger has been relatively quiet this series... but he needs to be a game-changer tonight if the Bolts are to stay out of a 3-0 hole.

With their backs against the wall, our free NHL picks examine how Kucherov should respond in a must-win game — and how you can extract the most NHL betting value out of his performance.

Kucherov was the driving force behind Tampa Bay's two previous Cup runs, and he has again been the lead dog for Tampa this year in amassing 23 points — with 3.53 shots and about 21 minutes of ice time per game — through the first three rounds.

Things have been rough for the Lightning overall through the first two Stanley Cup Final games in Denver, but the most shocking has been how badly the Bolts' star forward has been bottled up.

Kucherov has been slightly more productive overall at home during this playoff run, but through two games in the thin air of Denver, he mustered just one solitary shot on goal (and only five total shot attempts) while playing less than 19 minutes in each game — and getting absolutely dominated by Colorado's top line.

Of all the startling stats from #tblightning 7-0 loss, here's another one:

Spending most of his 5-on-5 time against the Nathan MacKinnon/Gabriel Landeskog/Valeri Nichushkin forward line, Kucherov's line managed a Corsi For percentage below 40% in Game 1 and the entire team did not get a shot attempt in Game 2 when Kucherov was on the ice against that trio.

Against the defensive duo of Cale Makar and Devon Toews, Kucherov's most common foes, the Bolts were down 5-1 in shot attempts in Game 2 with Kuch on the ice after being at an even in CF% in the series opener.

Why does that matter? Well, on home ice, the Lightning have the final change, which can allow coach Jon Cooper to try and get the Kucherov line (with Ondrej Palat and Steven Stamkos) more matchups against the Avs' depth lines and, more importantly, away from Makar/Toews.

In what is already a must-win game, we'd expect Kucherov to dig deep and bring a little more on the ice tonight... but considering he and his linemates should also get some easier matchups (and more time on ice), we're expecting the 29-year-old star to be much more assertive on the ice in creating offense and see some shot production more in line with his postseason averages.

Home ice should help Kucherov get some better chances at even strength... but we don't see it doing anything to fix a power play that looks utterly broken.

Tampa Bay's power-play unit is 0-for-6 through the first two games, but what's more concerning is non-threatening it has looked: the Bolts have generated just five scoring chances in 12 man-advantage minutes (compared to 18 for Colorado in 11:50 of PP time), with only two high-danger chances — and have conceded a shorthanded goal to boot.

The two things that have stood out in this series are perfectly encapsulated in the above goal:
1) Colorado's speed has given the Bolts fits (both in applying pressure on the PK and in turning a mistake into an offensive opportunity).
2) The Bolts have looked sloppy, unorganized, and out of sync with the man advantage.

Per Natural Stat Trick, Kucherov has had a point on about 83% of Tampa Bay's power-play successes in the postseason. Based on the Bolts' overall playoff success rate (currently 20.6%), Kucherov also has a roughly 83% chance to not record a point during a Lightning power play.

Even getting three attempts a game, the implied probability of Kucherov (10 PPP in 19 playoff games) to get a man-advantage point should see his odds sit well above the current -125.

And that's not factoring in how ice cold the Bolts' PP has been — they're in an 0-for-14 funk entering tonight and are just 3-for-26 (11.5%) over their last 10 playoff games — so it's only further adding to us loving the value on Kucherov & Co. staying quiet with the man advantage.

Plus money for a plus

If Kucherov is able to get some easier 5-on-5 matchups tonight, and the power play remains ineffective, there is some real value for him to have a positive plus/minus tonight.

He went +9 in the 10 games spanning the previous two rounds against Florida and New York, with a -1 rating in five road games and a +10 in five home contests.

After being just a -2 through two SCF road games (where his team was outscored 11-3), Kucherov again is at home with a chance to potentially go against some third (and maybe fourth) line opponents at even strength.

This should provide the best opportunity for Kucherov to outplay (and outscore) his opponents at 5-on-5, which has us leaning towards him against being on the right side of the plus/minus tally — at juicy plus-money odds. 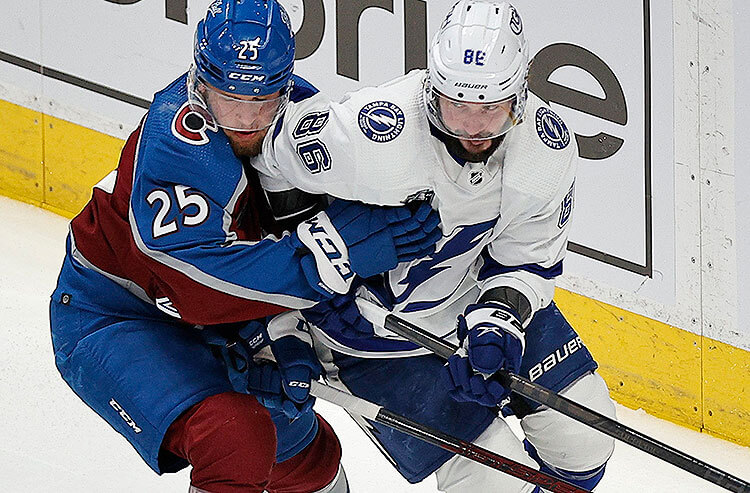