Following a blowout win in Game 2, the Avs travel to Tampa Bay for a high-stakes Game 3. Even on the road, we like Colorado to have the edge as the taste of Lord Stanley looms closer to reality. Find out more in our Avalanche vs. Lightning betting picks.

The Tampa Bay Lightning had plenty of time to adjust and game plan for the much faster Colorado Avalanche in Game 2, but instead, were embarrassed 7-0 in the second-largest shutout win in Stanley Cup Final history.

With a win on Monday, the Avalanche could push the two-time defending Cup champs to the brink of elimination and perhaps begin a dynasty of their own. However, the Bolts have been in this spot before and the one-sided win might provide some motivation for the outplayed Lightning.

Find out more with our free NHL picks and predictions for Avalanche vs. Lightning.

Game 3 has opened as a pick'em which is the right price as Colorado closed as -145 home faves in Game 2 and home ice is roughly worth 35 to 40 points venue-to-venue. The total has opened at 6.0 like the previous two games but is leaning to the Under, whereas Games 1 and 2 leaned to the Over.

Lightning: No key injuries to report.

Avalanche vs Lightning head-to-head record since 2016-17

The Under is 7-0 in the Lightning's last seven games when playing on one day's rest. Find more NHL betting trends for Avalanche vs. Lightning.

The Colorado Avalanche may have played the most perfect hockey game on Saturday in the second game of the Stanley Cup Final. In Game 1, Tampa was outplayed but still took the game to overtime thanks to some shaky goaltending by Darcy Kuemper. In Game 2, the Avs didn’t even let the visitors touch the puck.

In Game 7 of their series with the Rangers, the Lightning totaled 38 scoring chances in a 2-1 win — they have just 35 total scoring chances vs. Colorado through the first two games.

Colorado is a fast team but it also has a ton of defensive talent on the blueline as the Bolts had zero success gaining the zone Saturday night. The lack of O-zone time was almost comical. The Lightning had possession of the puck for just 28% of the time, including possession in the neutral and defensive zones.

Jon Cooper talks about the @TBLightning Game 2 loss, if he thought about pulling Andrei Vasilevskiy, the altitude, how to move forward and more. #GoBolts postgame ?? https://t.co/QC0yQbuiQc pic.twitter.com/Dmpyn2NNWM

Cooper is certainly right. This series has been very one-sided and the Avalanche are not even giving the Bolts a chance to expose their weakness, which is net with Kuemper. Tampa can’t keep up with the quick transition game of the Avs as the Bolts are getting gassed constantly chasing the play.

During the first period Saturday night, Cooper had a live interview where he was frustrated at his team’s inability to slow the Avs down. Colorado is breaking out of their own end so quickly and has three skaters seemingly every time going full speed by the time they get to the offensive blueline — with one of those players usually being a defenseman. Letting Colorado wind up from its own end is a quick way to play from behind and the Avs are proving that to be true.

When you have guys like Darren Helm, JT Compher, and Josh Manson stepping up offensively, you can’t stop it with how much talent is upfront. There is too much skill on the blueline and the amount of odd-man rushes the Colorado speed is creating is not something that the Lightning can take away easily.

Andrei Vasilevskiy was the Lightning’s best chance at stealing this series and the Avalanche have seemed to figure him out with plenty of shots going to his blocker side. Vasilevskiy allowed all seven goals in Game 2, which were the most goals the Tampa goalie had ever allowed in any game. Although his numbers at home have been amazing in the postseason, it just seems like there is too much for the Lightning to have to fix to have success.

I asked Josh Manson if shooting blocker was the scouting report on Vasilevskiy and what he saw on his goal.

We were high on the Lightning taking one game at Ball Arena, but after watching two very one-sided games where the Avs made the better adjustments and came out of the gates faster, there isn’t a lot to like on the Tampa side right now. We’ve seen the Bolts bounce back after a big loss (see Toronto series), but the speed, forecheck, and skill on the blueline might be impossible to shut down.

The Over is 2-0 in the series but the books opened Game 3 at +100 to the Over 6. We can understand the reasoning as Tampa has generated nothing offensively and has just 2.80 xGoals through two games.

Kuemper was soft in Game 1, but Bednar and the Avs tightened things up even more and didn’t even give the Bolts a chance to possess the puck in the offensive zone. It’s highly unlikely that the Avs can hit the Over themselves again, especially versus a team with a 2.14 GAA across its last 34 home playoff games. But if they can shut down the Lightning’s attack again, we could see the series’ first Under.

Colorado’s speed also helps them defensively as it has been attacking pucks and winning battles.

"[We are] hungry on the defensive side of things, trying to win as many races as we can, as many battles as we can, getting above pucks and making it difficult," Bednar said. "It's part of our identity and who we are. Our guys have been doing it all year and they're continuing to do it. Tonight, they did it better than we usually do."

Tampa isn’t generating any offense through 120-plus minutes in the series and needed some luck with some low-danger goals in Game 1 just to make the game competitive. The Bolts aren’t creating many scoring chances and if they do, they aren’t of the high-danger variety as the team has just 13 high-danger chances compared to the 26 from Colorado.

The Avalanche have scored 11 goals so far in this series and are a tough team to back with the Under with, but this is a team that can shut things down defensively and can suffocate the Tampa offense. They also shot 23% in Game 2 which is likely an unreproducible number as Vasilevskiy owns a 1.69 GAA and a .947 save percentage at home in the postseason this year.

With the Lightning’s dynasty on the line, they will have to come out with a better effort Monday night and Cooper is likely emphasizing that effort gets put forth on slowing down the Avs and not letting them wind up. Tampa’s best chance at getting a win here is with a low-scoring game and that’s likely why the books opened the total at 6.0, which is the lowest it has opened in the series.

Vasilevskiy should rebound after a disastrous Game 2 and the Avs have proven they can keep the Bolts off the scoreboard even with average goaltending. A 4-1 Colordao win with an empty-netter is where this game is heading.

We waited for the Kuemper save total to open and were happily surprised to see a total of 27.5 after the last game's 16-save performance.

The Avs have the Bolts on lockdown right now and Tampa is struggling just to get shot attempts, let alone shots on net. In Game 2, Colorado had more shots on net (30) than Tampa had attempts (29). That might not seem like a big deal but teams usually average around 60 per game.

Kuemper was shaky in Game 1 and Game 2's shutout was the first time he's posted a save percentage above .900 in six games. He is the sole weakness of this Colorado team and that's why the Avs tightened things up in front of him in Game 2. It was a perfect display of defensive hockey.

The Lightning had next to zero O-zone time on Saturday as the Avalanche defenders constantly stood them up at the blueline. Add in an offense in Colorado that can possess the puck at length in the attacking zone and there aren't a lot of scenarios where Kuemper sees a lot of shots.

The Avs are currently undefeated on the road in the playoffs and also allow the fewest shots on net at 28 per game. If Tampa wants to win this game, it won't be from dominating offensively. The Bolts will want to slow it down and that plays well here, too.

Did you know that if you parlayed today’s NHL Avalanche vs. Lightning picks, you could win $51.87 on a $10 bet? 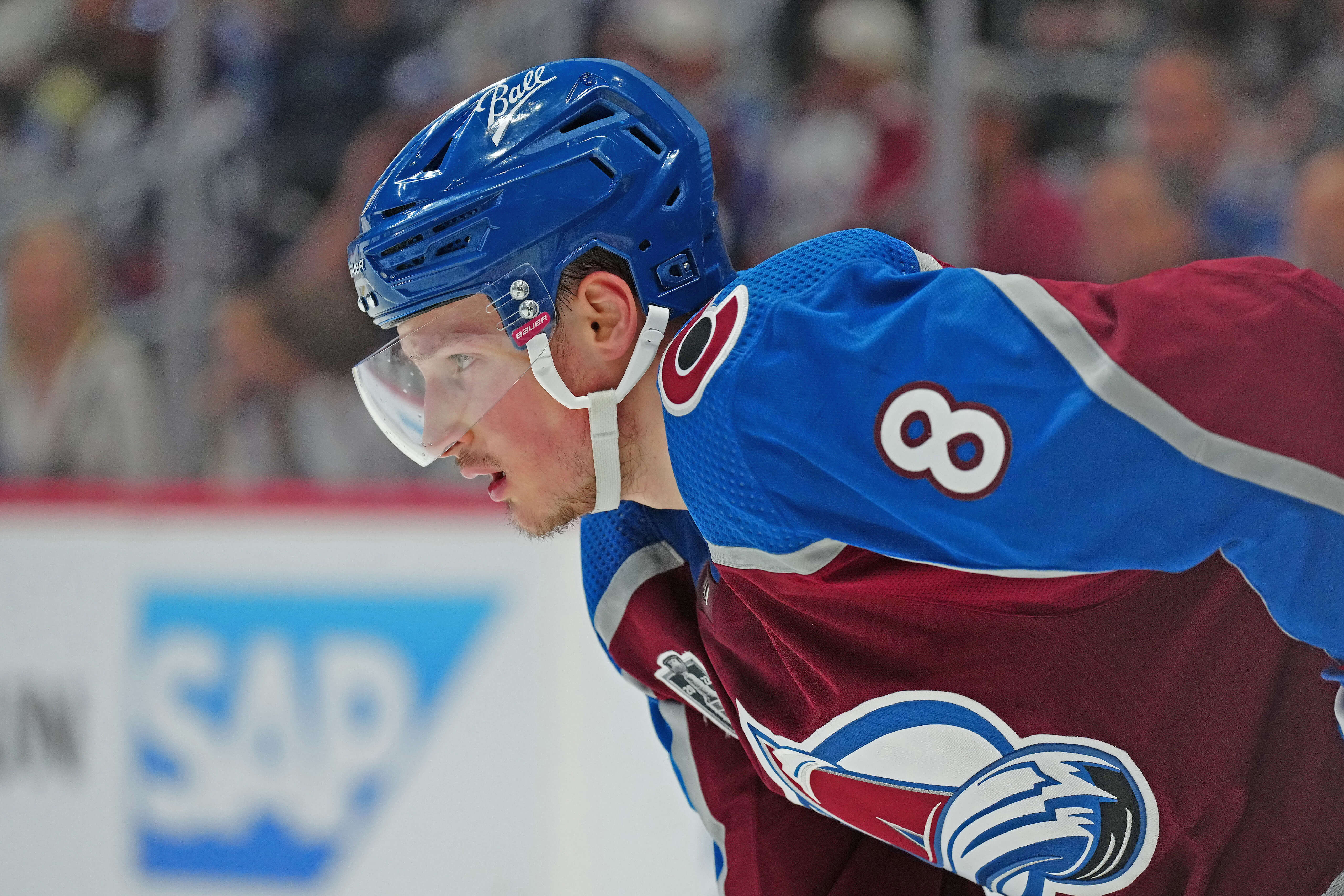