The Lightning are back in the Stanley Cup Final, in search of their third straight championship. In their way are the high-flying Avalanche, who cruised through the West. The Covers staff weighs in on whether the Avs can stop the Lightning dynasty.

Another year, another appearance from Corey Perry in the Stanley Cup Final, as the veteran forward makes his third straight appearance in the NHL's championship round, all with different teams.

Wait, what? That's not the remarkable fact? Oh, sorry: What's remarkable is that Perry's current team, the Tampa Bay Lightning, will look to win their third straight Stanley Cup (with Perry joining them after losing in each of the last two years).

The Lightning will be in tough, however, with Stanley Cup odds seeing the Bolts as underdogs against the Colorado Avalanche, who laid waste to the Western Conference en route to their first appearance in the Final since the 2000-01 season.

Which natural phenomenon will prevail and lift Lord Stanley's Cup two weeks from now? We asked our resident NHL experts how they think the 2022 Stanley Cup Final will unfold — and you might be shocked at the result.

Here are their free NHL picks and analysis below!

A) Stanley Cup Final to be decided by either a sweep or a Game 7 BOOSTED to +115 at BetRivers! Claim Now

The Lightning look to establish a dynasty and win back-to-back-to-back Stanley Cups. However, the juggernaut that are the Avalanche stand in their way.

Although the Avs have been the betting favorite for nearly a full calendar year, we're riding the experience of the Bolts here. They have the edge in net and behind the bench — plus their defense is likely the second-best unit in the league (behind Colorado).

No team is better at sitting back and waiting for the other team to make a mistake. Colorado wasn't flawless versus the Oilers, and without Nazem Kadri, this is a different team.

Tampa could also get Brayden Point back, which would be a huge boost, and if Andrei Vasilevskiy can steal a game in Colorado, the Bolts could be hoisting their third straight Cup in six games.

But you know what it does not have? The better hockey team.

The Bolts have already beaten equally high-powered offenses in Florida and Toronto, and they grinded down a Rangers team that just could not generate enough offense (or puck possession) to come away with a series win.

But Colorado is a much more physical team, and has a far deeper blue line, than both the Panthers and the Leafs, while possessing an offense (both in terms of top-end talent and depth) that is on another stratosphere compared to New York.

Vasilevskiy will certainly steal a game, while Colorado's goalies may even give one away, but the Avs' relentless offensive pressure will ultimately be too much for even the best goalie in the world to overcome.

The Colorado Avalanche are a whole different animal from previous seasons, and there is a massive difference between the team they have this year compared to the team that fell short of expectations last year. They have come into this postseason with a chip on their shoulder and their best players have exploded offensively.

It's hard to bet against the two-time defending Stanley Cup champions — and that isn't typically something I would recommend — but I just don't think the Lightning will be able to keep up with the pace that Colorado plays at.

The Tampa Bay Lightning have the edge in goaltending in this matchup, and yes, goaltending is extremely important, but what Tampa does not have is Makar or MacKinnon. If you ask me, Makar is the favorite for the Conn Smythe Trophy right now, with five goals and 17 assists in just 14 games, and he has led this Avalanche team in all facets of the game.

Tampa doesn't have anyone on its roster that can skate like Makar, or MacKinnon for that matter, and that gives the Avs the edge. They lead the playoffs offensively with 4.64 goals per game... and I'm not sure that even Vasilevskiy can slow them down.

I think the Avalanche take this series in five games — but if you want to go on the conservative side, betting Avalanche -1.5 for the series (+110) gives you a little buffer in case the Lightning steal a couple.

The Avalanche should knock the back-to-back champion Lighting off their throne in convincing fashion.

Their first-round series with the Predators looked like a mismatch on paper — and proved so on the ice with a sweep. The Blues took the Avs to Game 6 in the Western Conference semifinals, but their shaky defense relented to a Colorado offense that featured seven 20-goal scorers in the regular season, led by Mikko Rantanen (36 goals).

The Avalanche then made light work of the Oilers in the conference finals, sweeping Connor McDavid & Co. while relying on backup netminder Pavel Francouz in lieu of the injured Darcy Kuemper.

The Lightning needed another postseason choke from the Maple Leafs to survive the first round, beat a green Panthers team in the semis, then eliminated the top-heavy Rangers in the conference finals.

Goalie Andrei Vasilevskiy has not looked like himself for the majority of these playoffs, and the Avs will not be intimidated by him as they hoist their first Stanley Cup since 2001.

I like the Lightning to upset the heavily favored Avalanche for three reasons.

1) Tampa Bay goaltender Andrei Vasilevskiy. He is the best goalie in the game — and proved it again against the New York Rangers, allowing five goals in the last four games of the Eastern Conference Finals.

2) Colorado’s health. Avalanche forwards Andrew Cogliano and Nazem Kadri are both out with hand injuries. They are expected to come back at some point in the series, but how effective will they be? Also, goalie Darcy Kuemper has been nursing an upper-body injury.

3) Experience. This will be Tampa Bay's third straight Cup Final appearance, with a chance to be the first three-peat Cup winner since the 1980-83 New York Islanders.

Colorado may be faster and have more flare, but Tampa Bay is the back-to-back Stanley Cup champion for a reason.

The most important ingredient for their success is Andrei Vasilevskiy. On their road to the final the Avalanche have looked very impressive — but scoring in bunches against Conner Ingram, Jordan Binnington/Ville Husso, and Mike Smith doesn't prove much.

Darcy Kuemper is expected to be available for the Avs, but is that actually a good thing?

The Lightning have more experience, better goaltending, are better on defense, and have better coaching. 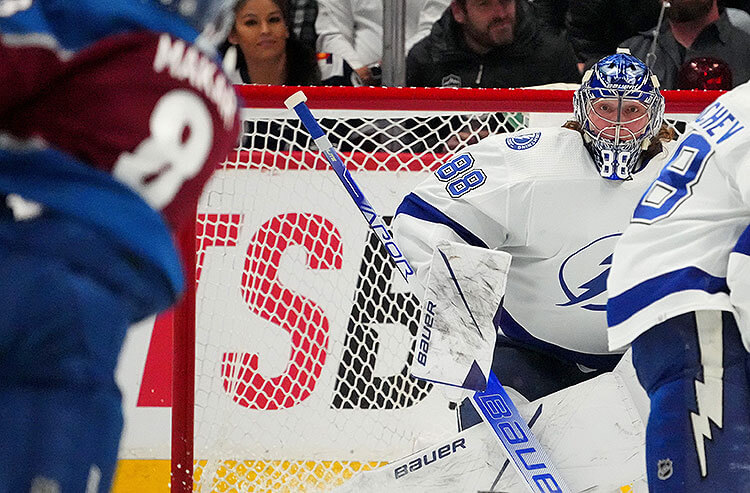