The Stanley Cup Final starts this week, with the Colorado Avalanche looking to stop the defending champion Tampa Bay Lightning. Ahead of the series, let's take a look at how they got here, what the X-factors are, and make our pick for the winner.

We have finally reached the pinnacle, the Stanley Cup Final, which will feature two teams that all hockey fans have been wanting to go head-to-head.

The Colorado Avalanche, seeking their first Stanley Cup since 2001, absolutely dominated their path to get here, sweeping the Predators, taking down the Blues in six games, and sweeping the Connor McDavid and Leon Draisaitl-led Oilers.

The Tampa Bay Lightning have been here and done that, as they are now playing in the Stanley Cup Final for the third year in a row and the fourth time in seven years.

Our Stanley Cup Final series preview for the Lightning vs. Avalanche has the series price, what X-factors might define this matchup, and a free series prop pick below.

The Lightning's road to the Stanley Cup Final

The start of the postseason did not look very promising for the Tampa Bay Lightning, as they lost to the Maple Leafs 5-0. That was all they needed to wake up and settle in for yet another cup run.

The Lightning had their backs against the wall down 3-2 in the series but Brayden Point, who has always been clutch for them, scored the overtime winner to send it to a seventh game, which they would win on the road.

The second round was expected to be much more difficult for the Bolts, but they had no issues going up against their in-state rival, the Florida Panthers. The Lightning swept them and found themselves in the conference finals yet again, taking on the New York Rangers.

Once again, the Lightning faced some adversity as they went down 2-0 in the series, but with the help of their first line of Nikita Kucherov, Steven Stamkos, and Ondrej Palat, they were able to win four straight games to take down the Rangers in six games.

Now, here we are with the Tampa Bay Lightning just four wins away from solidifying their status as a dynasty.

A) Stanley Cup Final to be decided by either a sweep or a Game 7 BOOSTED to +115 at BetRivers! Claim Now

The Avalanche's road to the Stanley Cup Final

The Colorado Avalanche came into this postseason on a mission after losing four straight games last year to the Vegas Golden Knights, which ended their season in the second round. This Avs team is far and away the most talented team in the league, led by Norris candidate Cale Makar and Nathan MacKinnon.

The first round was a completely dominant performance, as they barely had any struggles taking down the Predators in a sweep. Their only adversity in Round 1 came in Game 2, when they couldn’t find a way to score on Connor Ingram, but Makar was eventually the overtime hero.

Round 2 was a bit more challenging for the Avs, as they faced the 2019 Stanley Cup champions, the St. Louis Blues. They had to win yet another overtime game, with another defenseman, Josh Manson, finding the winner.

The unlikely hero was Darren Helm, who potted home the series-clinching goal on the road in Game 6 in the dying seconds to send them to the Western Conference Finals.

The Avs then shocked the hockey world with their dominance against the best player on the planet, Connor McDavid, while sweeping the Oilers. Makar did an excellent job defensively on McDavid and limited his chances.

Artturi Lehkonen, the trade deadline acquisition, scored the overtime winner that sent his team to the Stanley Cup Final for the second straight year (last year with Montreal).

He might not be all over the stat sheet, but what Anthony Cirelli does defensively cannot be measured. Cirelli did a fantastic job at shutting down the Mika Zibanejad against the Rangers and his line will once again try and shut down the opposition’s top players.

Cirelli’s line will most likely get matched up with the MacKinnon line for Colorado, which will be a huge test. That line is the spark for Colorado’s offense, so if Cirelli is able to shut it down, it’ll give his team a much-needed boost defensively.

The offense is not the concern for the Lightning. If they’re going to win this series, it’ll be by taking time and space away from MacKinnon and Makar.

Avalanche X-factor: Kuemper keeps them in it

Everyone knows how good Andrei Vasilevskiy is in the blue paint for the Lightning, but the biggest question mark for Colorado has been goaltending. Darcy Kuemper was injured in the conference finals, and he is expected to return for the Stanley Cup Final.

Kuemper has been solid, but he is nowhere near Vasilevskiy, so he is going to have to step it up a notch. As of now, Kuemper is skating to a .897 save percentage, a 2.65 goals against average, and -4.4 goals saved above expectation.

We all know Colorado can score goals, but this will be the toughest challenge that its forwards have faced. The Avs will need the best goaltending that they could possibly get from Kuemper. If he doesn’t stop pucks, this could be a very tough series for the Avs.

The Avalanche are an offensive juggernaut with a ton of weapons up front, but the goalies that they have face thus far come nowhere near Vasilevskiy.

That said, with home-ice advantage and the last change, the Avalanche will be able to get the matchups they want, which will be extremely helpful for them in the first two games of this series to get an edge.

The Lightning have not seen a team that is close to as offensively gifted as the Avalanche, so it will be interesting to see what John Cooper’s game plan is.

The biggest key for the Lightning is to play a disciplined game and stay out of the penalty box. The Avs’ power play is lethal and the Bolts' penalty kill is slightly above average.

Tampa wasn’t very good in the first two games of the conference finals and if it doesn’t come out of the gate flying, it’ll be in serious trouble — especially since the Avalanche are undefeated on the road in the postseason.

It’s hard to bet against the two-time defending champions, but the Avalanche got here with ease and I think their skill level is simply too much for Tampa to handle.

The Avalanche will finally get over the hump. 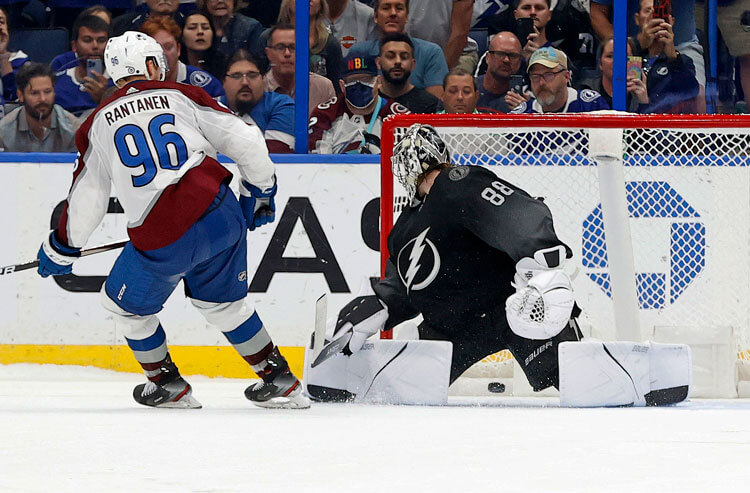