The Rangers have an elite record... but their possession metrics are anything but. Visiting a Hurricanes team that has both the record and the stats to back it up, our NHL betting picks expect the Canes to surge to the top of the Metropolitan Division.

Carolina trails New York by two points for first in the division but has four games in hand and can pull even at the top with a regulation tonight. NHL betting lines have the high-scoring Hurricanes as sizable home favorites tonight — but can they crack the code of one of the NHL's Vezina Trophy frontrunners?

Get our thoughts with our free NHL betting picks and predictions for Rangers vs. Hurricanes on Friday, January 21.

Editor's note: this preview was written before it was announced that Alexandar Georgiev would start tonight for the Rangers.

This line opened Carolina -155/New York +135, with some books now offering the Rangers at +140, while the Hurricanes range anywhere from the opening number to as low as -175. The total opened at a flat 6 but has dropped to 5.5 as of early Friday morning, with extra juice on the Over.

Canada: Hurricanes, Penguins, and Stars to all win boosted to +400 at BetVictor! Claim Now

The Over is 5-2 in the Hurricanes' last seven games against Eastern Conference opponents. Find more NHL betting trends for Rangers vs. Hurricanes.

Rangers vs Hurricanes picks and predictions

The Rangers are a truly curious team, with a record that stands among the NHL's elite... but 5-on-5 possession metrics that rank among the league's lottery-bound clubs.

New York is dead last in the league with a 44.31% Corsi For Percentage (per NaturalStatTrick) this season, meaning they have the largest gap between shot attempts generated and shot attempts against. If you sample that into just the last three weeks, New York has moved all the way up to 31st in the league in CF% — but the actual value has dropped to 40.72%. New York is also giving up the fifth-most high-danger scoring chances against per 60 minutes in this span, so it's not just a ton of harmless shots.

But yet here we are, with New York having the fourth-most wins in the league this year, riding a three-game win streak, and coming off a win over Toronto that saw the Rangers drop five unanswered goals. How is this possible?

New York's No. 1 netminder has been otherworldly this season, leading the NHL with 0.944 goals saved above expected per 60 minutes (per MoneyPuck), a 2.03 goals-against average that is nearly a full goal per game better than expected, and an .874 high-danger save percentage that ranks second in the league. Shesterkin struggled in the first period Wednesday against Toronto, giving up three goals on his first 11 shots, but then proceeded to shut down the next 27 shots from the high-powered Leafs offense.

Tonight, he'll have to deal with an even more lethal Carolina offense, which is fresh off a 7-1 beatdown of the Bruins and has scored at least four goals in seven of its last nine games (4.56 per game average), going 7-2 SU in that span.

While the Rangers have been awful based on 5 on 5 analytics, the Hurricanes have been absolutely dominant. Carolina is second in the NHL in CF% and 11th in HDCF/60 this season. The Hurricanes have also been getting elite goaltending as well from veteran Frederik Andersen, who is 4-1 with a 2.26 GAA and .930 SV% this month, albeit facing a much lighter nightly workload than his counterpart tonight.

In terms of special teams, both teams are Top-10 in powerplay this year (Carolina No. 5, New York No. 10) and both rank in the Top 3 in penalty killing, so there's little to no advantage there. The goaltending is nearly a wash, with a slight edge to Shesterkin and the Rangers, so it comes down to, again, the action at even strength.

While both teams have dynamic top sixes with superstars on both lines, the Hurricanes hold a big overall edge in possession — and with Carolina's dynamic talents likely to generate upwards of 60% of all the offensive chances, that's enough to have us lean with the home side tonight.

With two legitimate Vezina Trophy candidates in between the pipes tonight (with Shesterkin arguably the Vezina favorite now) and both teams being nearly automatic on the penalty kill (Carolina 95%, New York 90%) since January 1, it's easy to side with the line movement that has pushed this total from a flat 6 to 5.5.

But looking at the Blueshirts' play against the league's elite offenses shows that they are prone to give up some goals. Shesterkin has played seven games against teams currently in the Top 10 in goals per game this season, giving up at least three goals in four of them (Toronto, Tampa Bay, Florida twice) — with the three other games requiring Igor to make 28, 38, and 40 saves as New York was collectively outshot 109-72 in those games.

Shesterkin posted a .972 SV% in those low-scoring games against elite offenses, compared to a still-above average .909 SV% in the other games. The Hurricanes profile the same as those other teams, so unless Shesterkin is superhuman again, we can expect the elevated number of quality scoring chances to result in a couple of goals sneaking by the Rangers' goalie tonight.

Despite the poor possession metrics, New York still averages nearly three goals per game on the year, with that number up to 3.25 per game since 2022 started. The Rangers have been very opportunistic in the new year, sitting with the fifth-highest 5-on-5 high-danger shooting percentage in the league and the sixth-highest shooting percentage overall, and with Andersen sitting near the bottom of the league in HDSV% during this span, New York should be able to capitalize on the limited opportunities they will get.

Neither team will likely hang a crooked number tonight, but both sides will scratch out a couple of goals and push this Over tonight's total.

The result was Toronto's top line posting a negative CF% for the game with just 7 seven total shots on goal... but that allowed Toronto's other dynamic line (featuring John Taveras and William Nylander) to have a little more opportunity to create offense.

Tonight we expect Mika & Co. to focus on containing Carolina's top line of Sebastian Aho, Teuvo Teravainen, and Seth Jarvis. That means we're looking at the Canes' second line to carry their offense — with a focus on shot machine Andrei Svechnikov.

The second-overall pick in 2018, Svechnikov leads the team with 109 shots on goal this year and has 26 sog in his last six games (4.33 per game). With an expected teamwide possession advantage — and likely avoiding the Rangers' top line — we're going to bank on Svech firing a ton of pucks on net yet again and cashing the Over on his sog prop.

Did you know that if you parlayed today’s NHL Rangers vs. Hurricanes picks, you could win $56.35 on a $10 bet? 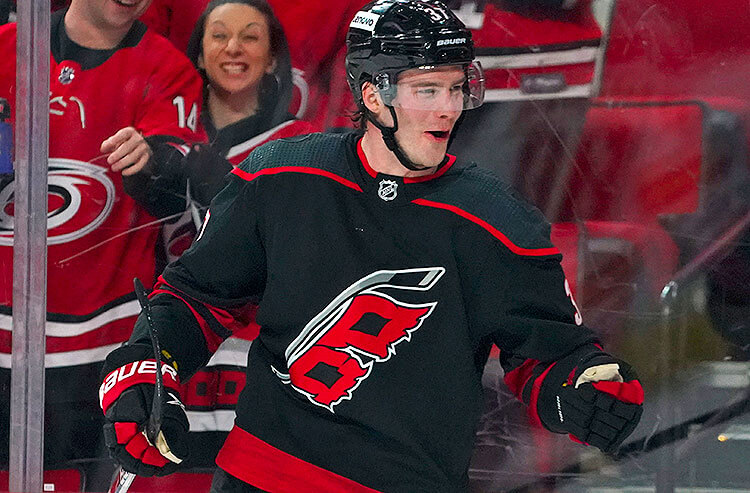 Rangers vs Hurricanes Picks and Predictions: Carolina's 5-on-5 Edge Will Be The Difference
Provided by