Rangers vs Blue Jackets Picks and Predictions: Blueshirts Caught In A Trap (Game)

After getting thoroughly embarrassed on home ice last night, Columbus will look to bounce back tonight against the Rangers at Nationwide Arena. This matchup has trap game written all over it — do our NHL betting picks think New York will fall victim?

After getting thoroughly embarrassed on home ice last night, the Columbus Blue Jackets will look to pick up the pieces and put forth a better effort tonight when they host the New York Rangers.

The Jackets come into this game having lost three straight, all at home, and are massive NHL betting underdogs against a Rangers team that has won five of their last six games — but is there a schedule spot that works in favor of Columbus?

Get our thoughts with our free NHL picks and predictions for Rangers vs. Blue Jackets on Thursday, January 27.

The line opened at New York -190/Columbus +165, and has since grown to see the Rangers anywhere between -200 and -225 at the time of writing. The total remains at 6, albeit shaded towards the Under. This is a massive change since these teams last played in mid-November, when the Rangers closed at -132 — also in Columbus — and is more in line with the -192 New York closed at when it hosted the Blue Jackets in late October.

The Over is 6-0 in Columbus' last six games on the second half of a back-to-back. Find more NHL betting trends for Rangers vs. Blue Jackets.

The Blue Jackets putting forth a better effort tonight, compared to yesterday, shouldn't be all that hard since it's an extremely low bar to hurdle. Columbus was wholeheartedly humiliated last night, losing 6-0 to Calgary and giving up a whopping 62 shots on goal — a team record for the Flames and the most shots on goal for a visiting team in a regular-season game since the league started tracking sogs... in the 50s.

It was the third straight loss for the Jackets (all of which came on home ice) and continues a brutal January where the team is just 3-8 and has coughed up 5+ goals five times. The Blue Jackets have been awful in terms of generating offense at 5-on-5, sitting 27th this month in Corsi For Percentage, 25th in scoring chances for per 60 minutes, and 28th in high-danger chances for per 60.

But is there reason to think they can win (or at least compete) against the Rangers tonight? Actually, there are a few.

Despite sitting atop the Metropolitan Division and winning five of their last six, the Blueshirts are actually worse than Columbus this month in 5-on-5 CF% (31st), SCF/60 (30th), and expected goals for per 60 (30th, compared to Columbus' 24th). New York has had a sub-50 CF% (meaning it has generated fewer shot attempts at even strength compared to its opponent) in 15 straight games but has still maintained winning hockey thanks to outstanding goaltending from Igor Shesterkin and elite special teams play.

New York's power play has been lethal lately, with five tallies in its last three games and clicking at a Top-10 rate this month, while the penalty kill is fifth during that time frame. This is a massive edge over Columbus' 29th-ranked power play and 16th-ranked penalty kill — but New York doesn't have as big a goaltending edge as you'd expect tonight and the schedule will be a factor.

While Shesterkin has been arguably the Vezina Trophy frontrunner halfway through the season, this is a tough schedule spot for the Rangers as they are playing the front end of a back-to-back, with tomorrow's game against a much more difficult opponent in Minnesota... AND the franchise is retiring the jersey of legendary goaltender Henrik Lundqvist — so the team is trotting out its No. 1 netminder for a momentous occasion on home ice.

Backup Alexandar Georgiev has been solid for the Rangers but he doesn't have the ability to bail out New York like Shesterkin does, as evidenced by Georgiev's -0.19 goals saved above average this month (compared to Igor's 9.56 mark). Considering the Rangers were recently outplayed at even strength by the likes of Arizona, it's not a stretch to think the Blue Jackets — who will be eager to come out and atone for last night's debacle — will play with an edge and maybe even push the play on a Rangers team that is in an obvious trap game without its star goalie.

We're not saying that Columbus will win — because it's still the less-talented team — but we can see the Blue Jackets at least keeping it close tonight.

We talked about the Rangers likely starting their backup goalie tonight... but Columbus will be sending out the lesser its two goalies for this game as well.

Joonas Korpisalo has struggled mightily this season, posted a 3.96 goals-against average and .881 save percentage, while posting a quality start in just 25% of his outings. Things have been even worse in January, as he has an .865 SV% in six starts this month, with a -7.10 goals saved above average — 86th out of 86 goalies who have made an appearance in January.

With two backup goalies playing — one who is playing around league-average and one who is absolutely horrid — that's a positive in favor of the Over.

Add in Columbus' extra effort to erase the memories of the Calgary beatdown and New York's power play continuing to buzz... and we've think we have enough to get this game Over the number.

We mentioned how the Rangers power play has been white-hot, and the engine of that is superstar defenseman Adam Fox.

The reigning Norris Trophy winner is having another stellar season, leading all NHL defensemen in points, sitting second among all skaters in assists, and third in power-play points.

He has recorded a power-play point in four of his last fives games and facing a Blue Jackets team that has taken at least three penalties in 12 of its last 13 games, he's a solid bet to log another point with the man advantage tonight. 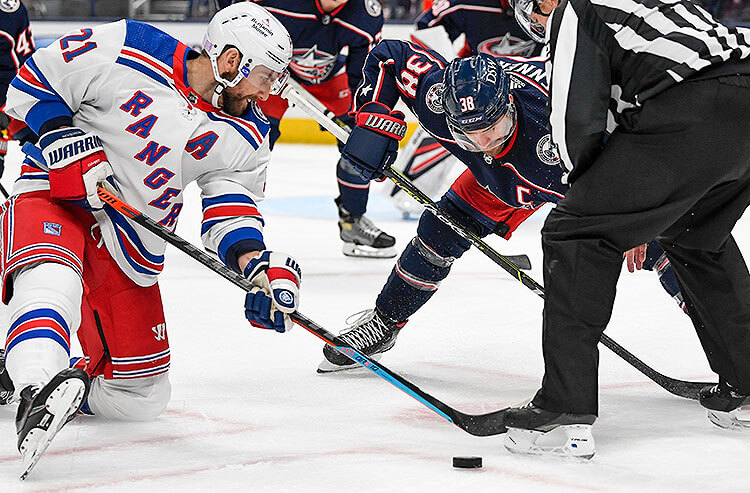 Rangers vs Blue Jackets Picks and Predictions: Blueshirts Caught In A Trap (Game)
Provided by