Edmonton finally picked up a couple of wins, but it now has to host a Nashville team whose teeth look pretty sharp right now. Find out why we're expecting a bunch of goals with our Predators vs. Oilers NHL betting picks.

Don’t look now, but the Edmonton Oilers are riding a two-game winning streak following their seven-game losing skid. We'll see if the early-season Oilers are back, or if they'll struggle tonight at home versus the Nashville Predators, who have won three straight games themselves.

Will Connor McDavid’s OT winner versus the Canucks get the possible MVP going? Can the Predators avoid just their third regulation loss in their last 15 games? Find out in our free NHL picks and predictions for Predators vs. Oilers on January 27.

The Oilers opened as slight -115 home favorites but it has since moved to a pick ‘em. The total is sitting at 6 and leaning to the Over. Edmonton closed as -240 ML favorites in an early-November meeting but Nashville was on the back end of a back-to-back. The 5-2 Edmonton win closed with a total of 6.

Predators vs Oilers head-to-head record (since 2018)

The Over is 5-0 in the Predators’ last five road games. Find more NHL betting trends for Predators vs. Oilers.

Predators vs Oilers picks and predictions

The Oilers were one loss away from getting buried by the media but pulled off the 5-3 victory over the Flames Saturday after trailing 2-0 early. They took that momentum and picked up another two points in Vancouver in a game where they outshot the Canucks 50-27. It’s a little concerning that they needed a Connor McDavid OT winner to get the second point, considering they were facing Vancouver's Spencer Martin in net.

Before we start pumping up the Oilers, this is still a team that is 5-17 SU since December 1 and some of the issues that the team has struggled with have not been solved — especially in net.

Mikko Koskinen has won back-to-back games for the first time since December 1. He needed to pull off a 44-save performance versus the Flames to pick up the first victory but this is still a goalie with a .899 SV% and is arguably one of the worst current starting goalies in hockey. It’s not Koskinen’s fault. He’s been put into a tough situation with Mike Smith on the shelf, but that won’t stop a surprisingly good Nashville offense from getting on the scoreboard tonight.

Since Christmas, the Predators are scoring 3.50 goals per game, which is a Top-10 mark. They’ve scored at least four goals in each of their last three games — all wins — and get to face an Edmonton team that is allowing more goals per game since the restart than every team not named the Montreal Canadiens. The Oilers needed some great goaltending to get past their losing streak, but that’s an unsustainable avenue going forward with the current personnel.

Nashville will likely start Juuse Saros in net tonight. The Finnish goaltender has been streaky this season and it appears he is on one of his heaters right now. He’s given up five goals over his last three games and wasn’t in net for the Predators’ 5-2 loss at Edmonton back in early November. Nashville had played the Flames the night before the previous meeting with Edmonton, so the 5-2 Edmonton final is a little misleading.

We aren’t sold that the Oilers are back. Zach Hyman and Tyson Barrie are still out and getting Saros at -110 vs. Koskinen is a decent price. The Predators are better in nearly every 5-on-5 metric and have the fifth-best point% since December at 15-5-2.

The Predators have sneakily become one of the better Over teams since the restart at 10-4 to the Over. They’re scoring 3.50 goals per game and allowing nearly 3.00. The power play is scoring at a Top-10 rate and will get to face an Edmonton penalty kill that has surrendered 11 goals over its last nine games. At a 57.7% kill rate since Christmas, the Oilers own the league’s worst penalty kill.

Filip Forsberg is also heating up for the Preds. The Nashville forward has four points over his last two games and has scored seven goals over his last eight.

Scoring was a big issue for the Oilers over their losing streak(s) and more specifically the production of Leon Draisaitl and Connor McDavid. However, since the Calgary game, these two have shown some life. Draisaitl had two goals and two assists in the win in Calgary and added another goal in Vancouver. McDavid had the game-winner versus the Canucks and has totaled four points over the team’s two wins. Ryan Nugent-Hopkins also returned to the lineup on Tuesday and registered an assist in the victory.

We wouldn’t be surprised to see this total hit 6.5. If Vancouver vs. Edmonton closed at 6.5, this one should too, as Nashville's offense is tiers above the Canucks. Koskinen has a near-4.00 GAA since December but is 7-2-1 to the Under thanks to the Oilers’ struggles putting up goals. With Nugent-Hopkins back and the Big 2 finding their scoring touch, we should see some decent two-way scoring here. This total should be 6.5.

The Oilers have seen a closing total of 6.5 or 7 in seven of their last nine games and it’s a bit of a head-scratcher why this number hasn’t hit 6.5. McDavid and Draisaitl are responding to criticisms and Edmonton finished with 4.41 xgoals and 50 shots on net versus the Canucks on Tuesday. If this offense is back to normal and Koskinen is his normal self, this game could finish with the highest number of goals on the board tonight.

The Predators are flying under the radar as a Top-10 offense and face a team that has the second-worst GAA over the last two months. Give us some goals Thursday night. 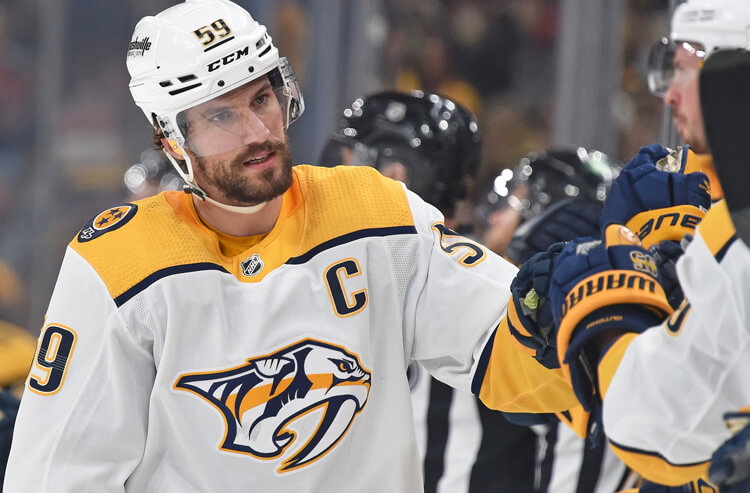