Florida is in the midst of a 12-game winning streak, and we like that to continue against Toronto who was blown out on Thursday against Tampa Bay. Find out more in our Maple Leafs vs. Panthers NHL betting picks. 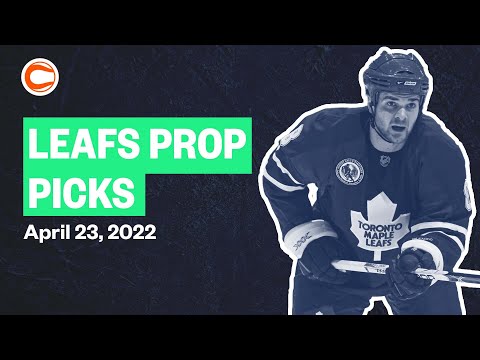 The Toronto Maple Leafs got a taste of playoff hockey from the Tampa Bay Lightning in Thursday’s 8-1 humiliating defeat.

Now, Sheldon Keefe and his squad will have to regroup Saturday night as they face the Florida Panthers who scored seven times vs. the Buds in the last meeting three weeks ago.

Can Florida pick up their 13th straight win despite the Leafs being 11-2-1 over their last 14 games? Can the Leafs get some offensive support with Auston Matthews likely drawing back into the lineup?

Find out in our free NHL picks and predictions for Maple Leafs vs. Panthers.

Florida opened as -150 favorites on the moneyline but has moved to -135, thanks to Auston Matthews likely suiting up. The total opened at 7 and has since hit the lofty number of 7.5. Florida closed as -160 favorites in the meeting earlier this month which saw the Panthers win 7-6 in overtime. That total closed at 7.

The Over is 7-0 in the Maple Leafs’ last seven games as a road underdog. Find more NHL betting trends for Maple Leafs vs. Panthers.

The Leafs got a taste of what the first round could be on Thursday and it wasn’t pretty. The Lightning spanked the Buds by a score of 8-1 and won most of the physical battles in a game that saw a total of 113 total minutes in penalties.

It was a wake-up call for a team that hasn’t made it past the first round of the playoffs in a generation. However, it might not be a positive thing for the visitors who have to regroup and face hockey’s best team Saturday night.

The Florida Panthers have won 12 straight games and are scoring a league-best 5.08 goals per game over that stretch. Sure, they’ve beaten just two playoff teams during the streak (one of them being the Leafs), but this is the most dangerous team in hockey right now and one that erased a 5-1 Toronto lead in 30 minutes just 20 days ago.

Florida is outscored its opposition 31 to 12 since defeating the Leafs 7-6 in overtime and the Panthers haven't allowed more than two goals in six straight games.

Although Spencer Knight has been the better of the Florida goalies of late (5-0 SU with a .939 SV% and a 1.75 GAA over his last three starts), the Leafs will see Sergei Bobrovsky. Big Bob is still 12-0 SU over his last 14 starts and just has to be average, as the offense can support him and his 2.66 GAA over the last 50 days.

It will be tough for the Leafs to move on from Thursday’s game. The Bolts could easily be the Buds’ first-round opponent and that game likely will have some lasting impressions on a Toronto team that is certainly envious of the team’s success over the last two seasons. That game made the Leafs a better team but it could be nearly impossible to move on from quickly.

It’s not that the Leafs played a poor game in Tampa — they allowed three power-play goals and had backup Erik Kallgren in net — it’s the fact that the Leafs could certainly be looking ahead to the playoffs with just four games remaining and date with the Lightning almost locked in stone.

Auston Matthews’ likely return should add a boost for the visitors and is probably the reason the line moved from -160 to -135, but beating the Panthers at home is as difficult as it gets in the NHL.

Matthews was in the lineup when the Buds collapsed and blew their 5-1 second-period lead. Matthews may be developing into a great 200-foot player, but no team has had any success slowing down this Florida offense at home this season.

Florida leads the league in goal%, xgoal%, Corsi, Fenwick, and goals for at even strength, and is scoring 4.72 goals per game on home ice on the season. Jonathan Huberdeau is gunning for the Art Ross trophy and their last loss on home ice was back on February 26.

The Panthers have gone almost two months since losing on home ice. It now gets a Toronto team that has won plenty of games of late but might have something else other than Florida on its mind tonight.

Florida closed as -160 favorites in the last meeting and we aren’t buying the bounce-back spot here for the visitors. The Panthers are just too good and nearly impossible to beat on home ice even if they give up three goals.

Florida at -135 is the best ML price on the league’s best team at home all season.

It’s not often we see totals of 7.5 but here we are after the game opened at 7. The last meeting cleared the total of 7 mid-way through the second period and it doesn’t really matter who is in the net when the league’s best home offense meets the league’s best road offense.

Even without Matthews, the Leafs scored a total of nine goals in the two games without the center. Nylander has picked up the slack while the power play has come to life. Matthews had a massive game in the last meeting (3G, 1A) and since he is likely to suit up, there has been a little movement towards the Over 7.5.

With these two teams, we suggest just staying off the total altogether rather than betting on the Under. 7.5 is a huge number but we saw how easily this Panthers’ team erased that 5-1 deficit and scored with ease versus Toronto.

Jack Campbell is the Leafs’ best option in net but he hasn’t been elite of late, and has been in and out of the lineup with an undisclosed injury. He owns a 3.33 GAA with a sub-.900 SV% over his last nine games.

The Leafs showed they had no issues scoring against Bobrovsky as they beat the Russian goalie four times on 14 shots in the last meeting. It’s a little surprising to see Florida go with Bob here and not Spencer Knight, but Knight will get the nod tomorrow versus the Bolts.

The Leafs’ penalty kill took a beating last game as well and gave up three goals to the Lightning’s No. 11 power play. It was the third time in nine games Toronto had allowed multi-power-play goals to its opponent. Florida scored three PP goals in the last meeting as this game will feature two of the league’s best power plays.

This is a lofty total but we’d be surprised if both teams were held to under three goals each. Both teams sit in the Top 5 in Overs on the season and are offense-first clubs who can also give it up defensively.

Sam Reinhart was skating on the third line at practice but the Florida lines have been quite fluid of late so we aren’t reading too much into it. What we are reading into is Reinhart sitting at 29 goals on the season, and he could be the team’s fourth 30-goal scorer with a cookie today.

He has two goals in his last three games and also had two goals and an assist in the last meeting. Reinhart gets plenty of time on the first power play unit and scored both of his goals on the man-advantage in that 7-6 win vs. the Leafs 20 days ago.

He also leads the team with PP goals with 14, while the Leafs have given up multi-PP goal games in three of their last nine games. 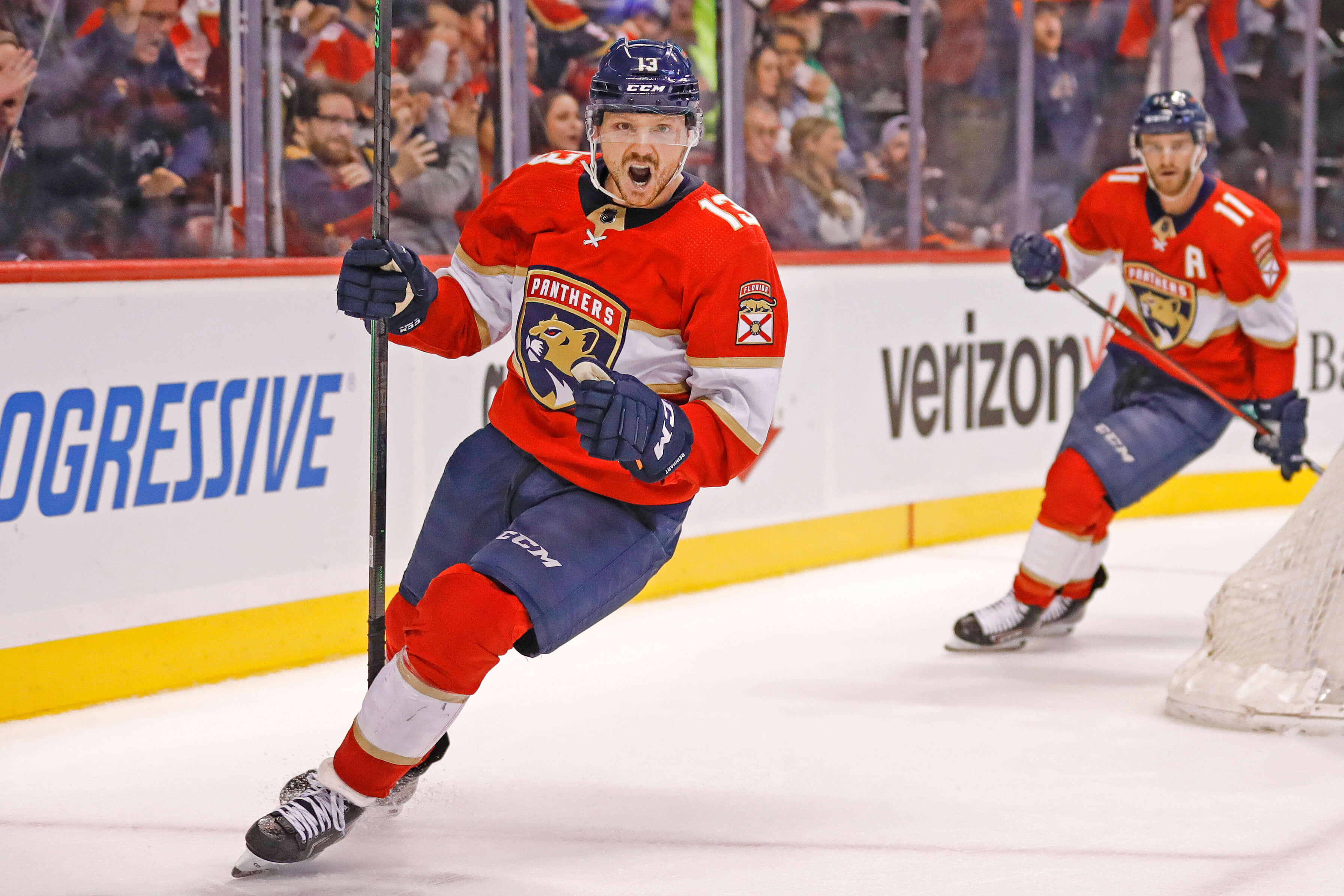