The Leafs will be without Jack Campbell and are playing the tail end of a road back-to-back, but the +105 number presents value on the red-hot Leafs that we can't pass up in good faith. Read more in our Leafs vs. Jets betting preview.

The Toronto Maple Leafs lost a shootout thriller last night and jumped straight on a flight to Manitoba to face off against the Winnipeg Jets.

The Buds are tied for the league lead in wins but they'll be slim road underdogs tonight with NHL betting lines installing them at +105.

Here are our best free NHL picks and predictions for Maple Leafs. Jets for Sunday, December 5, with the puck dropping at 8 p.m. ET.

This line opened with the Jets at -102 but early money has come in on the home side, swinging Winnipeg's odds to -125. The Total opened at 6 and while that has stayed steady at most books some have the Over/Under at 5.5 and heavily shaded towards the Over. When these teams last faced off in May, Winnipeg won 4-2 as a +137 home underdog.

The Maple Leafs are 7-1 in their last eight road games. Find more NHL betting trends for Maple Leafs vs. Jets.

The Jets are coming off an 8-4 victory over the Devils, which snapped an ugly seven-game stretch where they went just 1-6. Those eight goals were a welcome sight for a Jets team that totaled just five goals in the six defeats during that span.

The Maple Leafs saw their five-game winning streak come to an end last night in Minnesota when they fell to a red-hot Wild team in a shootout. They've still gone a ridiculous 15-2-1 in their last 18 games, outscoring foes 60-33 during that stretch.

The Buds will likely rest starting goalie Jack Campbell after he played last night and although he's been a massive part of their success this season, rookie Joseph Woll has stepped up when called upon. Woll shut out the Islanders on November 21 before turning aside 34 of 35 shots against the Sharks in his previous start nine days ago.

Toronto has been creating scoring opportunities all season, ranking second in the league in high-danger chances per 60 minutes in 5v5 hockey. While they struggled to capitalize on those chances earlier on, those shots are now finding the back of the net.

The Jets have been strong at even-strength this season, and they rank eighth in the league in goal for percentage in 5v5 hockey, just two spots behind the Leafs. However, they've been absolutely brutal on special teams, ranking 21st with a power-play percentage of 17.4, while their penalty kill rate of 68.3 is second-worst in the league.

The Leafs are dominating every phase of play right now, ranking among the Top-7 teams in the league on both the powerplay and penalty kill while also ranking second in face-off win percentage. It's always tough to play on the tail-end of a back-to-back on the road, especially without their starting goalie, but you're not going to see many occasions where you can grab them at plus money.

We mentioned that the Jets have been struggling to find consistency on offense, and they have scored two goals or fewer in each of their last nine losses.

Luckily for Winnipeg, it has a strong goalie in between the pipes with Connor Hellebuyck. The 2020 Vezina Trophy winner is putting together another solid season with a 2.68 GAA and a save percentage of .916 in 16 games. Hellebuyck has allowed two goals or fewer in 10 of his last 12 starts.

With that steady play in nets and unreliable offense, the Jets have gone 9-4-1 to the Under in their last 14 games. Meanwhile, the Leafs could have some tired legs after playing in overtime last night. The Under is 5-2 in their last seven games on zero days of rest and is 15-6 in their previous 21 contests following overtime the previous day.

William Nylander didn't score a single point last night but he was a consistent threat, generating seven shots on the net. The winger has thrived playing on the same line as John Tavares and Alex Kerfoot and is third on the team with 23 points while ranking second behind Auston Matthews with 95 shots.

The Jets rank sit the middle of the league when it comes to both shots allowed per game and scoring chances allowed per 60 minutes. With the Over/Under on Nylander's shots set at 3.5, a number he has surpassed in five straight games, take the Over at plus money. 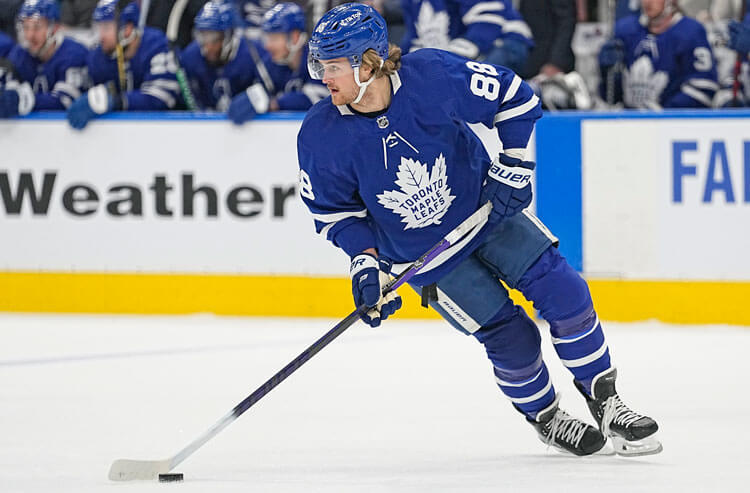 Maple Leafs vs Jets Picks and Predictions: Leafs Value Too Great to Turn Down
Provided by