Maple Leafs vs Canadiens Game 4 Picks and Predictions: Can Habs Rebound on Tail End of A B2B?

Toronto goaltender Jack Campbell has been brilliant through three games against Montreal, sporting a 1.35 goals-against average and a .951 save percentage.

The Toronto Maple Leafs sweated out a 2-1 win last night to take the 2-1 series lead versus the Montreal Canadiens. The home side won’t have much time to recover from the defeat with Game 4 being the tail end of a back-to-back.

Without two of their three best centers, the Leafs managed to build a 2-1 lead after two periods and weathered the storm in the third as the Canadiens outshot Toronto 15-2 in the final frame — but could not solve goalie Jack Campbell.

Oddsmakers have Toronto as -172 NHL betting road favorites with the total opening at 5.5 and trending to the Under.

Here are our free picks and predictions for Toronto Maple Leafs vs. Montreal Canadiens for Tuesday, May 25 with puck drop set for 7:30 p.m. ET.

Toronto opened as low as -170 on the road and has been bet up to -184 on the moneyline. According to FanDuel sportsbooks, 86 percent of the moneyline bets are on the Leafs while Toronto has drawn 56 percent of the puckline bets, currently sitting -1.5 (+146). The goal total opened 5.5 (Over EVEN) and the vig has shifted to Over 5.5 (+104), with 56 percent of total wagers riding on the Under.

The Under is 6-1-2 in the Maple Leafs’ last nine games following a win. Find more NHL betting trends for Maple Leafs vs. Canadiens.

It wasn’t as convincing as their Game 2 victory, but the Maple Leafs found a way to win yesterday thanks to goalie Jack Campbell. Campbell stopped 28 of 29 Montreal shots, including all 15 in the final frame. The one-goal outing pushed his playoff goals-against average to 1.35, which is better than Vegas’ Marc-Andre Fleury and now the first-time playoff goalie is boasting a .951 save percentage.

The Montreal power play failed to get many chances Monday, drawing just three penalties and subsequently going 0 for 3 with zero shots on net. There were chances as Cole Caufield hit iron in the first, but the extra-man game has been a major disappointment for the Canadiens as the PP is 0 for 9 in the series.

The Leafs are getting a lot of offense from someone who is missing both his original linemates. With John Tavares and Nick Foligno on the bench, William Nylander still managed to score a goal in three straight games, playing on a line with below-average players in Alex Kerfoot and Alex Galchenyuk.

The Leafs’ third-line was doing its usual shutdown thing as it finished the game with an 89 Corsi For percentage and an 88.4 expected goals percentage. This line has become one of the unsung heroes for the Buds and is doing a lot of the hard work for them by creating more chances than it’s giving up.

This game proved the Leafs can win a close game — even when Carey Price is on his game. The quick turnaround for this matchup will benefit the Leafs, who are a deeper team and could get Nick Foligno back in the lineup. The Habs also lost Artturi Lehkonen in the first period in Game 3.

We aren’t getting off the Campbell wagon just yet.

Game 2 scared us away from the Under as Montreal pulled its goalie with five minutes left in a 4-1 game. However, it won’t be often that the Leafs get four past Price and the same can be said about Campbell.

Both goalies have played sensationally and this series may be showcasing the best goalie matchup in the playoffs. Both tendies are sporting save percentages above .925 and have collectively amassed 5.34 goals saved above expected. Campbell is still succeeding in not giving up rebounds as his three shots off a rebound last night give him a total of five for the series — these goalies are swallowing up everything.

Neither power play has been a threat either so far. Montreal is scoreless on nine attempts through three games while the Buds are 2 for 14. Toronto does not give up many penalties, as they finished the year as one of the least penalized teams in the league at 2.92 infractions per game. If Montreal wants to score, it’ll have to do it at even strength.

With three goals so far at 5-on-5, the Montreal even-strength offense is producing at the worst rate out of any playoff team at just one goal per game. Playing a hot goalie for the fourth night likely won’t help improve those numbers so we aren’t very high on the Habs scoring three goals any time soon. 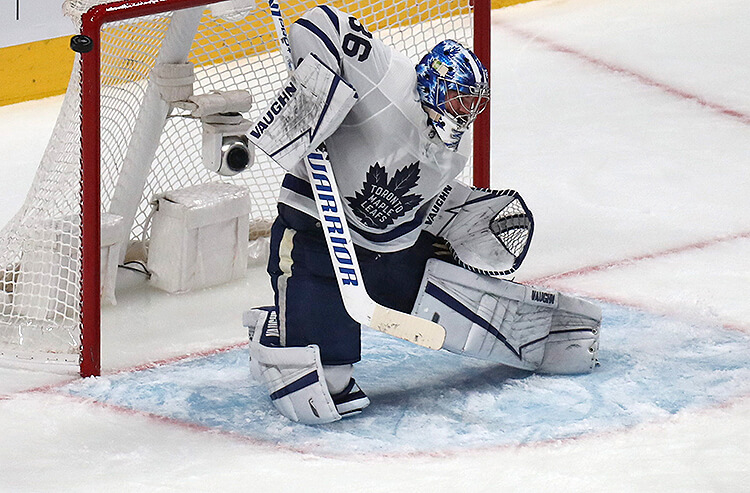 Maple Leafs vs Canadiens Game 4 Picks and Predictions: Can Habs Rebound on Tail End of A B2B?
Provided by