The Leafs are mired in a horrid stretch of hockey but are massive NHL betting favorites tonight vs. a Chicago team that hasn't even held a lead yet this year. That said, we simply just can't back the Buds right now at this price.

The Toronto Maple Leafs are in the middle of an identity crisis and the noise of poor play is starting to get loud. Wednesday could be a breaking point as they travel to Chicago to take on a Blackhawks team that is dealing with some terrible PR and will be missing a handful of its top players due to COVID.

NHL betting lines opened at Toronto -165 but has quickly jumped to -200, thanks to the absences of Patrick Kane, Jonathan Toews, and more.

Here are our free NHL picks and predictions for Maple Leafs vs. Blackhawks on Wednesday, October 27.

The Under is 5-0 in Maple Leafs’ last five games playing on one day of rest. Find more NHL betting trends for Maple Leafs vs. Blackhawks.

The Leafs seemingly are set with another easy task Wednesday as they play another terribly short-handed team: Chicago will be missing four key forwards. Toronto had this advantage just two games ago, however, when it played the Penguins without Sidney Crosby, Evgeni Malkin, Jeff Carter, and Kris Letang.

The Leafs got thumped in that game 7-1.

It’s been a rough season so far for the Buds and a loss on Wednesday night could really do some damage to a team that is struggling to compete.

The Blackhawks will be missing Patrick Kane, who leads the team in scoring with five points in five games, but after that, the losses aren’t massive as center Jonathan Toews is nowhere near the player he used to be and is a minus-6 already in 2021. If The Penguins can get it done with a top line of Kasperi Kapanen, Evan Rodrigues, and Jake Guentzel, then Chicago has a fighting chance.

The problem with taking the Blackhawks is that they have been historically terrible: in addition to being winless to begin the year, they haven't held a lead in any of those games. They sit second in goals against per game at 4.50 as Marc-Andre Fleury has been horrendous, coming off a six-goal game.

But this is the NHL, where bounces are random and getting a home dog at +170 isn’t an everyday occurrence. The injuries to the Blackhawks aren’t as deep as the ones to the Pens and maybe not having Kane (and his lackadaisical defending) on the ice might actually help this Chicago backend.

The Leafs’ power play is god awful: the entire offense is scoring just 1.86 goals per game, the top line is soul searching and Mitch Marner and John Tavares have disappeared. Goalie Jack Campbell has looked shaky on this road trip, having allowed eight goals in his last two games, while head coach Sheldon Keefe can’t find a good fit for his third defensive pairing. Toronto loves the possession game but does nothing with it. This team should not be -200 on the road as it closed at just -150 at Pittsburgh just two games ago.

Chicago has a lot to prove, as well, and are mired in some front office legalities that are creating a distraction. Chicago might just be happy to get on the ice for 60 minutes and face a team that has the confidence of a prepubescent kid in middle school. There is enough young talent in Chicago to pull this win off and without Kane, an emphasis on defending could be a good thing for a team without a win.

The Over is a combined 5-7 between Wednesday night’s teams as both clubs have struggled offensively out of the gates this season. Chicago and Toronto sit 29th and 28th, respectively, in goals scored this year.

The talk about expected goals is getting old as the Leafs have failed to score more than three goals in any game this year and have potted just a single marker in back-to-back games. Keefe has tried to shuffle up the lines but nothing is going right for the Buds offensively and we’re not going to bet on them to snap out of it until we see it.

The Leafs have the No. 25-ranked power play and have just three goals in 22 attempts with the man advantage, which is not ideal when your PP unit is making nearly $45 million. Chicago has the No. 11 power-play unit but without Kane, the director, this unit shouldn’t be nearly as successful.

Hitting the Under here is scary with the play of the Chicago goalies. Marc-Andre Fleury gave up six goals in his last outing and has looked awful this year. He could give way to Kevin Lankinen, who is a league-average tender but Toronto has been stymied by Jake Allen, Anton Forsberg, Tristan Jarry, and Adin Hill this year so anything is possible.

Campbell is two games removed from getting the hook in Pittsburgh and was looking fantastic before hitting the road. Campbell getting back to his regular self is important for the Leafs and we like his chances to be decent tonight against a Chicago team that is missing some firepower.

Did you know that if you parlayed today’s NHL Maple Leafs vs. Blackhawks picks, you could win $42.65 on a $10 bet? 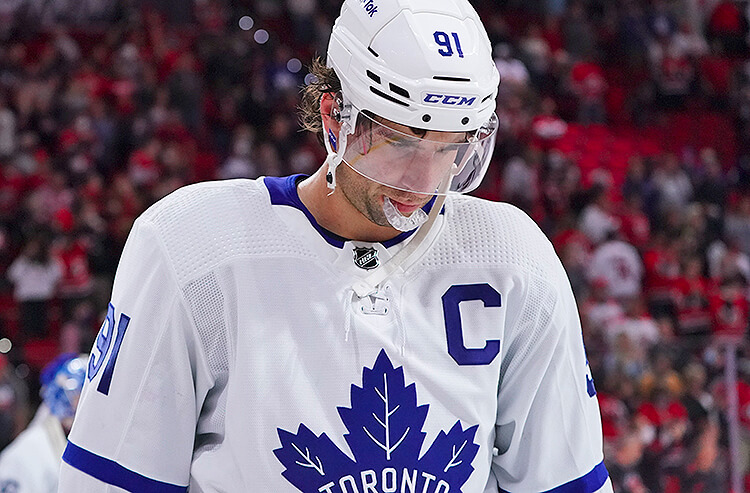 Avalanche vs Maple Leafs Picks and Predictions: These Buds Are For You
Josh Inglis | Nov 30, 2021

Toronto's Past and Present Represented in Current Vezina Trophy Betting Odds
Josh Inglis | Nov 30, 2021
About Us
Contact Us
Careers
Our Team
Brand
Testimonials