The Penguins have been really solid to start the year relative to expectations, the Lightning....not so much. At some point this season, we expect Tampa to return to form, but it probably won't be tonight. Find out why in our Lightning vs. Penguins picks.

The Tampa Bay Lightning head to PPG Paints Arena on Tuesday as they try to get a measure of revenge for their season-opening loss to the Pittsburgh Penguins.

The Bolts have won back-to-back Stanley Cups but have gotten off to a rough start to their season while the Pens have excelled without many of their top players. Nonetheless, NHL betting lines opened with the Lightning as -140 road favorites for this contest with the Over/Under at 6.

Here are our best free Lightning vs. Penguins picks and predictions for Tuesday, October 26, with the puck dropping at 7 p.m. ET.

Lightning vs Penguins picks and predictions

The Lightning were expected to once again challenge for the Cup this season but have gotten off to a poor start. They lost 6-2 at home to the Penguins in their season opener and are 2-2-1 since with both of those victories coming in overtime. They are coming off an ugly 5-1 loss to Buffalo last night, and have now been outscored 13-5 over their last three games.

The Bolts are 28th in the league in goals scored per 60 minutes in 5v5 (1.51). On the other end of the ice, reigning Conn Smythe Trophy winner Andrei Vasilevskiy has struggled in nets, allowing at least three goals in four of five games — including a disastrous performance against the Red Wings where he surrendered six goals on just 26 shots.

Pittsburgh was expected to be in trouble at the start of this season without superstars Sidney Crosby and Evgeni Malkin in the lineup. Instead, the Penguins have been lighting the lamp with a bunch of lesser-known players including Evan Rodrigues, Drew O'Connor, and Danton Heinen, who are tied for the team lead with three goals and five points.

The Pens are 3-0-2 this season and in their previous game on Saturday they destroyed the Maple Leafs by a score of 7-1. Pittsburgh is second in the league in scoring with 4.6 goals per game while goaltender Tristan Jarry has been red hot going 3-0-1 with a 1.47 GAA and a save percentage of .943.

This is a tough matchup to bet because the Lightning and Penguins' track record over the last few years (as well as the slew of injuries to Pittsburg's best players) suggests that Tampa Bay should be the play, while their recent form suggests otherwise.

While we think Tampa Bay will eventually right the ship, we're going to keep backing a red-hot Pittsburgh squad, especially when getting plus money at home against an opponent who is on the tail-end of a back-to-back.

Although these teams combined for eight goals when they met up in the season opener, the score was 3-1 with five minutes left in the third period before the Bolts pulled Vasilevskiy and a total of four late goals were slotted.

Vasilevskiy has struggled this season but he wasn't in nets for last night's hideous performance against the Sabres so he should be well-rested for this one. While his numbers this season are subpar, the Russian is a proven commodity who has been a Vezina Trophy finalist in each of the past four years, so expect him to bounce back from a poor performance on opening night.

Especially when you consider that Pittsburgh is due for some regression on offense. Although the Pens are averaging 3.91 GF/60 in 5v5 hockey, their expected goals for rate is just 2.29. And while they have been somehow filling up the net without Crosby and Malkin, that job will get even tougher without their best defenseman Kris Letang and center Jeff Carter who have both tested positive for COVID.

While the Penguins expected goal rate on offense suggests that their scoring production isn't sustainable long term, their xGA/60 is a league-best 1.73 so don't expect much regression from Jarry who looks to have recaptured his All-Star form from two seasons ago. Take the Under.

Did you know that if you parlayed today’s NHL Lightning vs. Penguins picks, you could win $31.13 on a $10 bet? 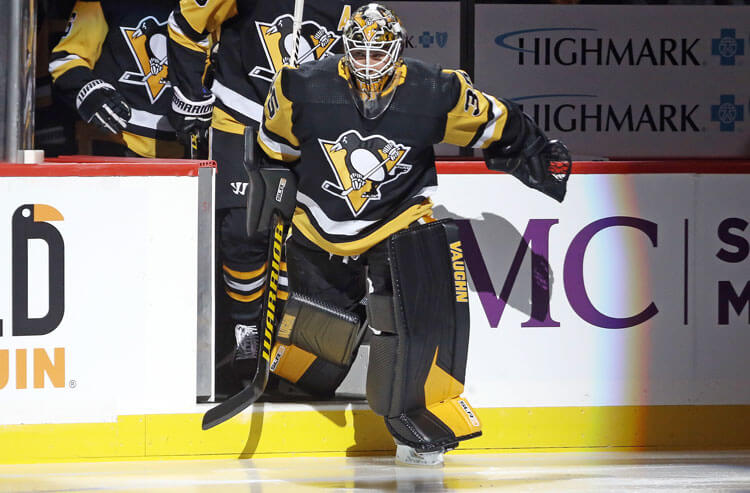 Lightning vs Penguins Picks and Predictions: Should We Keep Fading Tampa Bay?
Provided by

Oilers vs Golden Knights Picks and Predictions: Bank on the Over Again, Even If It Hits 6.5
Josh Inglis | Nov 26, 2021

Rangers vs Bruins Picks and Predictions: NYR's Depth, Goaltending the Keys to Victory in Boston
Josh Inglis | Nov 24, 2021
About Us
Contact Us
Careers
Our Team
Brand
Testimonials