The Los Angeles Kings are hosting the defending champion Tampa Bay Lightning tonight and enter the matchup as a sizable +175 moneyline underdog, but our NHL betting preview is spotting that as massive value with a team that's played strong hockey of late.

The Los Angeles Kings saw their four-game winning streak snapped yesterday with a 6-2 loss to the Sharks, now they’ll have to regroup as they welcome the Tampa Bay Lightning to town as the defending champs start their three-game California road trip.

Do the Kings have what it takes to bounce back as heavy home dogs? Can the Lightning grab two points and keep pace with the Florida Panthers as the top team in the East? Find out in our free picks and predictions for the Lightning vs. Kings.

The Lightning opened at -170 on the moneyline but within 90 minutes Tuesday morning was bet up to -210 with a total of 5.5 that has 6 at a few books. Tampa won the previous meeting 3-2 in overtime back in December as -190 home favorites.

Lightning vs Kings head-to-head record (since 2018)

The Under is 5-0 in the Kings’ last five games playing on zero days of rest. Find more NHL betting trends for Lightning vs. Kings.

Lightning vs Kings picks and predictions

The Los Angeles Kings were a trendy pick as they were +100 road dogs in San Jose yesterday afternoon. They got the doors blown off them by the Sharks, 6-2, after giving up the game’s first four goals in the first period. They outshot them, 41-17, but Jonathan Quick failed to do much with limited action. That could be a good thing for Kings backers tonight as they’ll likely turn to Cal Petersen who has been the better goalie of late.

The Kings were playing great hockey up until yesterday as they were riding a four-game winning streak with victories over the Rangers and Penguins during that stretch. Now the market is down on them after a bad loss and having to play on the second game of a back-to-back, but there are a few angles we like here for the +175 home dogs.

Petersen is 3-0 SU since the restart and has allowed just two goals in those games. He’s stopped 60 of the 62 shots he’s faced and is one of the more reliable backups in hockey. He’s never faced the Lightning, but the Kings walked into Amalie Arena a month ago and almost took two points off the Bolts in a 3-2 overtime loss. This will be a closer game than the ML is suggesting.

Another thing is Tampa Bay being on the road. The Lightning and Andrei Vasilevskiy are tough to beat at home with a 2.43 GAA, but on the road, that number jumps to 3.11 which ranks in the bottom half of the league. Tampa is 12-7 SU on the road and 3-3 SU in its last six road games with losses to the Rangers, Panthers and Senators. Vasilevskiy has a 1.88 GAA at home this season compared to a league-average mark of 2.50 on the road.

The Tampa Bay special teams shouldn’t scare the Kings. On paper the Lightning has one of the better power plays in hockey, but on the season, it’s 14th in success rate and 17th since December 1. It has produced a goal in three straight games, but it has been inconsistent on the season.

Yes, the Kings played yesterday, but they'll also welcome an East Coast team tonight who played their last game three time zones over. The Kings also played yesterday afternoon so the turnaround is a little less than a normal back-to-back.

The Kings played this team competitively in Tampa’s barn and at +175 on the ML tonight, we’re happy to jump on the home side who should come out hot after a terrible start yesterday.

With a total that doesn’t know whether to sit on 5.5 or 6, it gives bettors a great chance to shop around. In the last meeting, the total closed at 5.5 -130 to the Under. With Petersen in great form, this price should be similar to where it was in Tampa.

The Kings have closed at 5.5 in eight straight games while Petersen is 5-0 to the Under in his last five starts. At 14-24-1 O/U, no team in hockey has hit more Unders than the Kings. This is a team that sits 21st in goals per game (2.79) and seventh in goals against (2.62). High-scoring games are not this club’s thing. They allowed just 17 shots in yesterday’s 6-2 loss.

Both of these teams sit in the Bottom 5 in shots allowed per game and giveaways while the Kings are tight at even strength and allow the sixth-fewest goals in hockey at 5-on-5. The last meeting that finished 3-2, saw just over 5.00 expected goals and we don’t see this one turning into a shootout.

Vaslilevsky and Petersen can hold their own while both of these teams minimize quality chances at a  Top-10 rate. This total should be 5.5 at -110 and we’re happy to hit the Under on any price higher than that.

Tampa’s Brayden Point has been one of the best scorers since the restart. He’s scored in back-to-back games and has scored eight goals since Christmas. He's also averaging a healthy 3.50 shots per game over that stretch and will have ample opportunities to score. He’ll get his full array of special team minutes and showed he can score even without Ondrej Palat (Questionable) on his wing.

Point missed the previous meeting with the Kings so his addition tonight could prove difficult for the home side who will be playing against him for the first time in over two years. He's the third goal scorer on the anytime goal list and at +140 for Point to bury, we’re on board, even in a game we aren’t expecting fireworks.

He’s the hottest player on the team and the most consistent goal scorer in this game. This should be priced closer to +105 or +110. 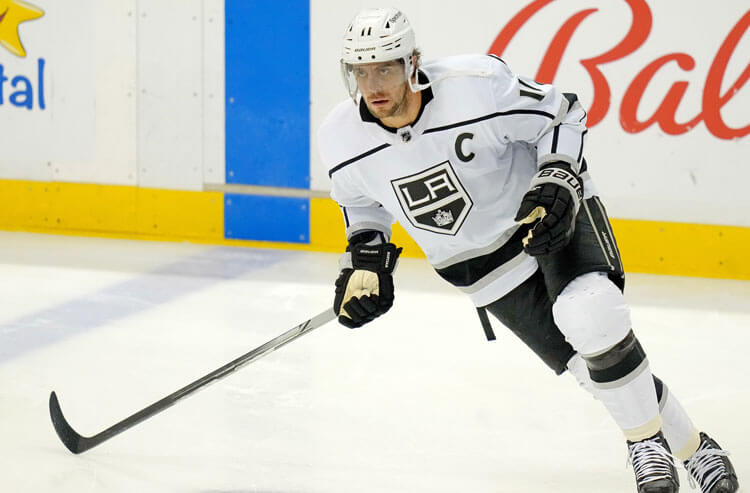 Lightning vs Kings Picks and Predictions: Back Under-Valued Kings vs. Road Lightning
Provided by

Oilers vs Flames Game 2 Picks and Predictions: Underdog Oilers Rise Up in G2
Robert Criscola | May 19, 2022

Rangers vs Hurricanes Game 1 Picks and Predictions: New York Quiets the Storm
Jonny Lazarus | May 18, 2022
About Us
Contact Us
Careers
Our Team
Brand
Testimonials