Conference finalists the New York Islanders are yet to be the favorite in the postseason and are the underdogs in Game 1 vs. the Lightning. Can they keep rewarding bettors? Find out in our Islanders vs. Lightning picks and predictions.

In a rematch of last year’s Eastern Conference finals, the New York Islanders and the Tampa Bay Lightning will meet in the NHL’s final four. The teams didn’t face each other this season, but the Lightning come into the Round 3 series as heavy -303 favorites.

The Bolts took last year’s series in six games, in empty arenas, so this year will be much different with both barns hosting 12,000-plus fans.

Oddsmakers have the Lightning as -200 NHL betting favorites with the total opening at 5.5 and trending to the Under.

Here are our free picks and predictions for Islanders vs. Lightning for Sunday, June 13 (3:00 p.m. ET).

Tampa Bay is out to -200 as of 1:30 p.m. today, after opening -185 at TwinSpires Sportsbook. Tickets are running 2/1 on the underdog Islanders, while money is 2/1 on the favored Lightning. The total dropped from 5.5 to 5, with the Over getting 59 percent of tickets/55 percent of money.

The Over is 5-1-1 in the Islanders’ last seven games. Find more NHL betting trends for Islanders vs. Lightning.

The books are very confident of the Bolts’ chances of rolling in this series, but for the Islanders, being an underdog is a badge of honor.

The Islanders have played 12 playoff games and are yet to be a favorite. That hasn’t stopped Barry Trotz’s team from racking up victories, as New York is 8-4 SU with an ROI of 50 percent. If the Islanders want to continue their upsetting ways, they’ll have to shut down the Tampa power play and blanket the Bolts’ top two lines.

The Lightning have scored 38 goals so far in the playoffs (3.45 per game) but nearly 40 percent have been with the man advantage. Nikita Kucherov has five total goals but only one at even strength. If the Islanders and their No. 4 regular-season penalty kill can keep the Tampa PP in check, the Lightning will be without their greatest strength.

New York got past the Bruins in six games and made great adjustments in the checking game, maintaining the damage that the Bruins’ top two lines could do. Yes, the Pastrnak-Bergeron-Marchand line managed to get on the board, but Taylor Hall’s line, as well as the defense, had a total of one goal each. If New York can make the Lightning one-dimensional, the Islanders could easily hang around in this series longer than most are thinking.

Tampa goalie Andrei Vasilevskiy may be on his way to second Vezina in three years, but the Russian netminder has been average over the first two rounds of playoffs. At home, the Lightning goalie has a .911 save percentage to go along with a 2.89 GAA. He is 3-2 SU at Amalie Arena this postseason. The Islanders only managed 12 goals in last year’s series versus Tampa, but this New York offense is singing a different tune this year and is averaging 3.58 goals per game, which is the highest mark of the four remaining teams.

We like this series to go six-plus games and don't have to think too hard to hit the Islanders on the ML when the books are gifting us +170 odds.

The Islanders finished the second round with a 4-1-1 O/U mark to push their playoff total to 7-4-1 O/U. The profitable Over game has been highlighted by New York’s newly established offense. New York scored four or more times in all four of its wins in the second round and will face Valsilevskiy, who has given up three or more goals in five of his 11 games.

Neither team has been dominant in the defensive game, as each team is giving up at least 2.70 goals per game. New York’s Semyon Varlamov has a 2.62 GAA which ranks as the 13th-best GAA in the playoffs. The Islanders were one of the stingiest teams during the regular season, but they are playing a different game now and Varlamov hasn’t looked as sharp.

Special teams will play a massive role in this series as both clubs have got it going on in the PP department. The Bolts are scoring on over 41 percent of their PP opportunities, while the Islanders are no slouch either at a 28.1 success rate.

Both teams will have a great chance of adding some extra-man goals as the Islanders and Lightning have not had much success in the penalty-killing department. New York had an elite PK during the regular season but just a 68 percent kill rate heading into Game 1 (three points lower than the Devils’ league-worst PK in the regular season).

The books have not adjusted to the Islanders’ offense and PK struggles and are still hanging great prices for the Over 5.5.

Did you know that if you parlayed today’s NHL Islanders vs. Lightning picks, you could win $49.40 on a $10 bet? 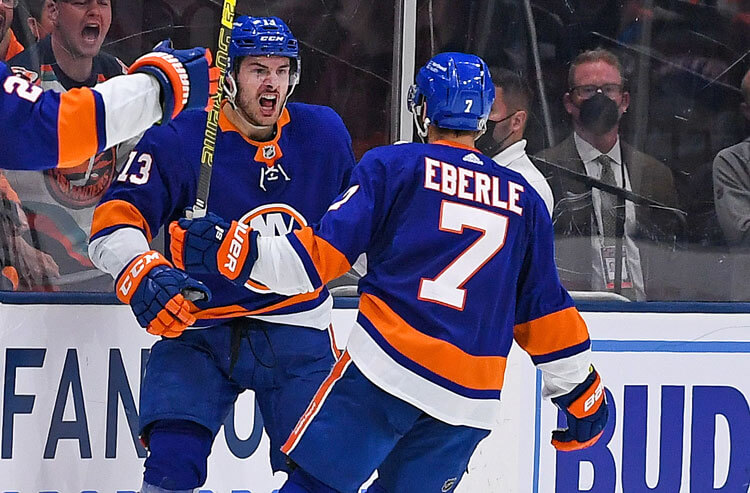