NFL betting action continues Sunday for Week 2, and we're going around the league to bring you our best NFL parlay picks. This week we're looking at the Cowboys vs. Bengals, the underdog Steelers, and more — check it out below.

An NFL betting mantra you’ll hear, year-in and year-out, is “Don’t overreact to Week 1.” While that’s certainly advice bettors should adhere to, it doesn’t mean you shouldn’t react at all to what happened in the opening week of the season.

I combined my preseason notions of every NFL team with their Week 1 efforts to come up with my best NFL parlay picks for Week 2.

We’re not backing the Steelers so much as we’re fading the New England Patriots in the opening game at Acrisure Stadium (formerly Heinz Field).

Many experts were down on the Patriots coming into the season, and it was easy to see why as Bill Belichick & Co. laid an egg in Week 1. Mac Jones threw for a modest 213 yards against the Miami Dolphins, who surrendered just seven points on defense.

It wasn’t all that shocking a result to those who knew the splits on Jones going into that contest in steamy Florida, as the Alabama product authored a weak 6:6 touchdown-interception ratio on the road in 2021. Even without TJ Watt, the Steelers should keep New England’s offense in check.

The Pats’ stoppers were burned by Tyreek Hill in his first game with the Fish to the tune of eight receptions and 94 yards. Pittsburgh possesses a speed merchant of their own in Diontae Johnson, who was a 1,000-yard receiver in 2021. Expect Mitchell Trubisky to look his way just as often as he did in Week 1 (12 targets).

The Steelers have been a superb bet as an underdog, going 36-15-2 against the spread in their last 53 games when getting points.

The second part of our early window parlay takes us to MetLife Stadium, where bettors should expect both the Carolina Panthers and New York Giants offenses to struggle to move the chains.

The Panthers didn’t get nearly as many scoring chances as the Browns did in their opening day defeat, running only 50 plays compared to their opponent’s 74. Carolina recorded an uninspiring 5.2 yards per play, with Christian McCaffrey being held to 33 rushing yards on 10 carries.

Baker Mayfield went 16-for-27 with 235 passing yards and a 1:1 touchdown-interception ratio, and it’s worth noting that 75 of those yards through the air came on one play.

The Giants will likely give the Panthers’ defense a steady diet of Saquon Barkley, who was instrumental in his club’s 21-20 triumph over the Titans in Week 1, as he rushed for 168 yards and a touchdown. More touches for Barkley and fewer for signal caller Daniel Jones will likely result in some long, clock-killing drives.

New York tends to be involved in low-scoring games, as the Under is 20-5-1 in the last 26 contests involving the Giants.

It’s difficult to deny that the Dak Prescott injury is severely damaging to the Cowboys’ playoff hopes. However, oddsmakers and bettors appear to be overreacting by making Dallas a sizable home underdog to the Bengals on Sunday afternoon.

The Cowboys will be quarterbacked by Cooper Rush in this spot, and while he is by no stretch the equal of Prescott, he has been in Dallas’ system for quite some time and has even demonstrated some ability to run it. On Halloween of 2021, Rush went 24-for-40 through the air against the Minnesota Vikings for 325 yards, tossing two touchdowns with only one interception.

Cincinnati’s defense isn’t porous, but it’s far from an elite unit. The Bengals ranked 17th by points allowed per game in 2021 (22.1), and 21st in yards allowed per play (5.5). It’s hard to put much stock into their effort against the Pittsburgh Steelers in Week 1, where they surrendered only 267 yards, but faced retread quarterback Mitchell Trubisky.

Joe Burrow took the AFC by storm late in 2021 en route to a Super Bowl appearance but looked like an NFL neophyte in Week 1. He committed five turnovers in that tilt, including four interceptions.

The Dallas defense was a turnover-producing machine in 2021, leading the NFL in both interceptions (26) and total takeaways (34). Cornerback Trevon Diggs had plenty to do with that, as he led the league in interceptions (11). He didn’t pick off Tom Brady in Week 1 but defended two passes.

Cowboys head coach Mike McCarthy will probably emphasize ball control as part of a cautious game plan with Rush at the helm. Ezekiel Elliott and Tony Pollard combined for just 16 carries in Week 1, but the Bucs have been as tough a team as any to run against in the NFL over the last few seasons, and Dallas fell behind in that tilt.

Expect both backs to be used more heavily in this one, helping Under bettors by keeping the clock moving. 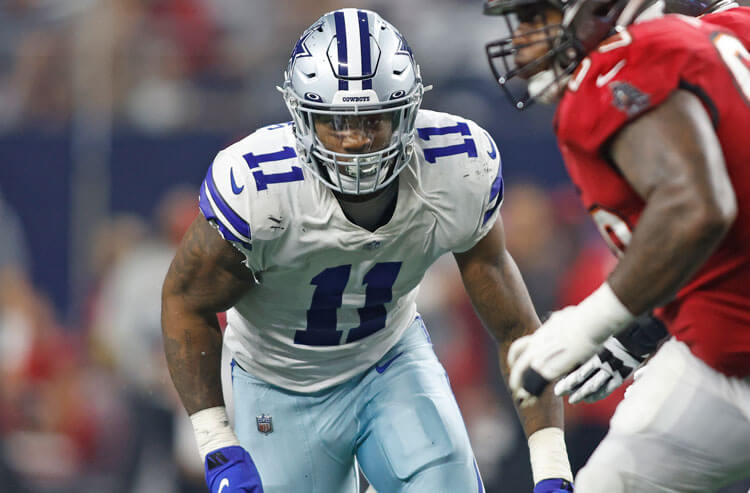