NFL Thanksgiving is almost as much of a tradition as stuffing, and we're filling up Thursday's betting slate with our favorite parlays, including some totals that both Micah Parsons and Kirk Cousins will have a say in.

An American tradition continues this Thursday, as the NFL presents its annual trio of Thanksgiving Day football games.

As usual, the Detroit Lions and the Dallas Cowboys will have hosting duties in the afternoon, with the Buffalo Bills and New York Giants serving as their respective opponents. The third and final course will be a primetime affair between the New England Patriots and Minnesota Vikings.

I’ve taken a liking to all three totals on this Turkey Day slate, and will separate them over two NFL Thursday parlays. I’ll also fold in a quarterback prop wager.

The Bills are back at their home-away-from-home — Ford Field — for a Thanksgiving showdown with the Lions, and there should be indoor fireworks to kick off the Thursday slate.

Buffalo is technically 5-0 to the Under in its last five road games, but the Over cashed when the Bills “hosted” the Browns in Detroit last Sunday. The Lions have been an Over bettors’ best friend for most of this season, and the historical trends support another high-scoring tilt involving Detroit. The Over is 20-8 in the Lions’ last 28 home games, 8-3 in their last 11 Thursday games, and 7-3 in their last 10 Thanksgiving Day contests.

Jared Goff could take a back seat on offense for Detroit, much like he did last Sunday when Jamaal Williams and D’Andre Swift accounted for four touchdowns in a victory over the Giants. The Bills’ run stoppers have proved porous since their bye week, allowing an average of 152.3 rushing yards over their last four tilts.

Much has been made of Buffalo’s turnover problems, led by Josh Allen, but they played a clean game against Cleveland last week. This offense is still averaging 382.3 yards per game since the bye, which has lowered their season average, but would still rank them in the top five in the NFL. The Lions can’t stop a nosebleed, rating last in the league by yardage (415.9).

When the Cowboys held the Vikings to just three points in Week 11, they rose to the No. 1 spot in scoring defense this season. The Giants have not been their equal in 2022, but this unit is good enough to ensure that this game will be low-scoring.

Micah Parsons and the Dallas defense are allowing just 16.7 points per game this year. They meet a New York offense that’s averaging only 20.5 points per game, 21st in the NFL. That factors in Big Blue’s 23-16 defeat to the Cowboys in Week 3.

“America’s Team” figures to employ the running game early and often on Thursday following this unit’s overwhelming success against the Vikings last week, as the Giants are eighth-worst at stopping the rush this year (135.9 yards allowed per game). With Ezekiel Elliott and Tony Pollard moving the chains and killing the clock, Saquon Barkley’s effectiveness could be severely hampered, and he’s been the engine that’s driven the Giants offense this season.

Trend bettors should note that the Under is 6-1 in the Cowboys’ last seven home games, and 8-1 in the Giants’ last nine games played in November.

Offenses have struggled for the most part in Thursday night games this season (who can forget the 12-9 Colts victory over the Broncos in Week 4, or the 12-7 Commanders triumph over the Bears just one week later?), and bettors should expect this trend to continue at U.S. Bank Stadium on Thanksgiving night as the Patriots play the Vikings.

The Under is 17-8 in the last 25 Thursday Night Football games, and Thanksgiving night Unders are 11-4 all-time, with the Under hitting seven straight times now.

Minnesota is clearly not as bad as it looked against the Cowboys in Week 11, but now it must contend with “primetime Kirk Cousins” in this spot. In seven career Thursday games, Cousins has gone 3-4 SU with a terrible 11-11 touchdown-interception ratio. He’ll face a New England defense that’s snared 11 picks this year, fourth in football.

The Vikings defense is no great shakes, but the Pats offense is not the kind of unit that can give them trouble, sitting 25th by yards per game (317.6). Bill Belichick’s squad has been particularly awful in the first quarter of games this season, scoring a league-low 15 total points in that stanza. They’re the only team with no first-quarter touchdowns to their credit in 2022. This one should be a snoozer throughout.

As we mentioned above, Cousins tends to shrink when the lights shine their brightest. The Turkey Day nightcap should prove no different.

The 11-year veteran threw for a mere 105 yards against the Cowboys last week, and was pulled in the fourth quarter of that blowout. It was fourth time this season he was held below 251 yards.

Cousins is averaging a mere 6.5 yards per attempt on the campaign, his lowest output since his partial sophomore campaign in 2013. New England is quite stingy in this area, ranking sixth in yards allowed per pass (6.6), and fourth in passing yards allowed per game (188.3).

Considering the Patriots are 16th in yards allowed per rush (4.5), Vikings head coach Kevin O’Connell would be wise to ride Dalvin Cook to offensive success in this one, rather than Cousins. The fewer dropbacks he takes, the more likely Cousins is to hit the Under on his passing yards prop. 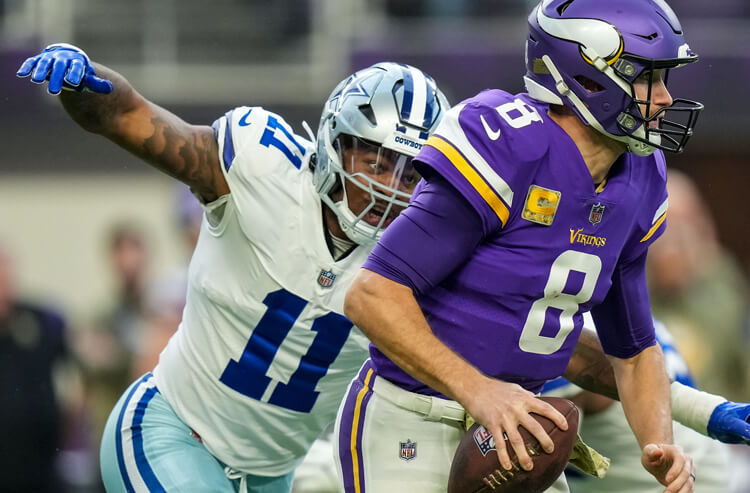