New England is once again a healthy home favorite, and with good reason after its showing in the AFC divisional round. The top-seeded Patriots (14-3 SU, 12-5 ATS) spotted No. 5 Tennessee a touchdown last Saturday night, then ran off 35 consecutive points on the way to a 35-14 victory as a 13.5-point chalk.

Third-seeded Jacksonville mustered just a touchdown and a field goal in a 10-3 win over No. 6 Buffalo on wild-card weekend. But the Jaguars (12-6 SU, 10-8 ATS) exploded in the divisional round at Pittsburgh, racing to a 21-0 lead and hanging on for a 45-42 victory as a 7-point underdog.

“We opened 8.5, we’re up to 9. We’re a little high on the Patriots,” Bogdanovich said. “But there’s plenty of Jacksonville moneyline. So right now, New England by 1 to 8 points would be good. And obviously, New England will be tied to every teaser – 42 billion teasers to New England.”

“The majority of the action has been on New England, and at this point, we have 75 percent of the tickets and just under 70 percent of the money on that side,” Cooley said of pointspread betting. “We did generate some Jags money over the last 24 hours after moving to -9.”

That prompted a move back to 8.5. Cooley said the under is also seeing steady sharp play, while the public is on the over. Bookmaker.eu opened the total at 47 and is down to 46.

Bogdanovich said William Hill US – which operates dozens of shops around Las Vegas among more than 100 throughout Nevada – was also high on the under, taking the total from 47 to 46.5.

Top-seeded Philadelphia put up the second-most points per game during the season at 28.6 (tied with New England), but that was almost exclusively with Carson Wentz at the helm. Over the last three games behind Nick Foles, the Eagles (14-3 SU, 11-6 ATS) have a total of just 34 points. In last week’s NFC divisional contest, Philly mustered four field goals and one touchdown in a 15-10 win over No. 6 Atlanta as a 2.5-point home pup.

No. 2 seed Minnesota pulled off one of the bigger playoff miracles of all time to earn a spot in Sunday’s 6:40 p.m. ET clash. The Vikings (14-3 SU, 11-6 ATS) fielded the league’s No. 1 scoring defense, allowing 15.8 ppg, and that D was doing a number on New Orleans last week as the Vikes took a 17-0 lead. But the Saints roared back and led 24-23 in the final seconds before Stefon Diggs’ incredible catch and run gave Minnesota a 29-24 win laying 5.5 points at home.

“Right out of the gate, we saw professional money on Minnesota, which prompted a move to -3.5, but respected action on the Eagles has moved us back to the key number,” Cooley said of activity at Bookmaker.eu. “There’s a pretty healthy balance up to this point, with the handle slightly favoring the Vikings at 53 percent. My gut feeling is that we’ll see more underdog money as we get closer to Sunday, much like we did in the divisional round.”

Fellow offshore shop Sportsbook.ag pointed to significant activity on the total from the outset.

“Sharp money hammered the Vikings-Eagles under 40. We moved a full point off that action down to 39 and then eventually to 38.5, as not only was sharp money betting under, the public is also supporting the under,” Childs said. “We got as low as 38.5 (under -115) before going back to 38.5 flat, which is our current number. So much depends on the weather, but if the weather is clear, this total will get back to at least 39 or higher.”

“We’ve got quite a bit of money on the Vikings,” he said. “If the early returns are any indication of who we’re gonna need, we’ll be rooting for the Eagles.”

Much like the Jags-Pats matchup, Bogdanovich said he expects moneyline wagering to create some liability on the ‘dog.

“We’re dead-even to the moneyline right now, but I can’t imagine not being high to the Eagles come game time,” he said. “It’s natural for people to gravitate to that plus money – bet a little to win a lot, or at least a little to win more.” 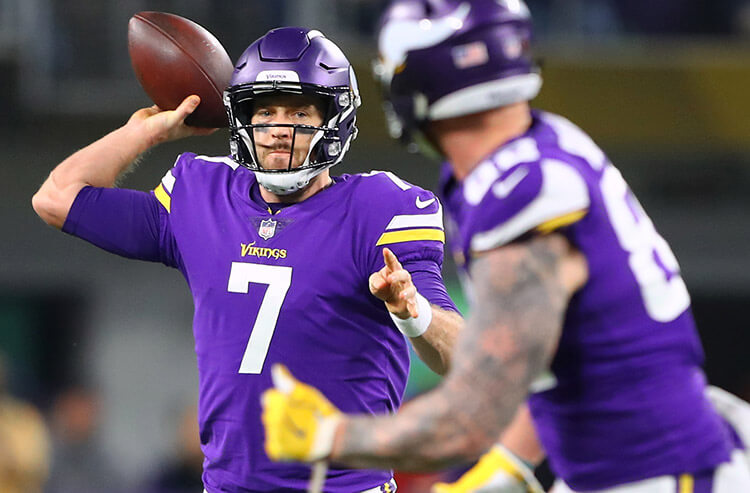