Few free agents have been as disappointing in 2022 as Allen Robinson but the WR is riding his two best games into Week 9. Our NFL prop picks expect Robinson to show up again for the Rams on the road against the Buccaneers.

In a rematch of last year's divisional round thriller, and a meeting of two brutally underwhelming teams, the L.A. Rams make the trip across the country to face the Tampa Bay Buccaneers in Week 9.

L.A. is fresh off its latest beatdown at the hands of the 49ers and looked every bit a desperate team to close last week, with Cooper Kupp & Co. still playing amid an uncompetitive blowout. Tampa, meanwhile, remained lost in the NFL wilderness on TNF a week ago, falling to Baltimore in a fairly sad fashion.

Despite the flailing nature of both teams, the stage is set for this to be a highly compelling game. We've got you covered with our best NFL prop picks, and check out our Rams vs. Buccaneers picks and predictions for more.

HigBeast back in the cage

What was once one of the league's best and steadiest pass-catching roles for a tight end has faded largely into nothingness.

Tyler Higbee's season began with his role evolving from a seam-stretcher and red-zone threat to an extension of the running game, with quick hitters and tunnel screens becoming a staple of a bland Rams offense. That evolved role didn't give L.A.'s offense a spark but it certainly made Higbee a dependable Over bet with modest lines week after week. Not so much anymore.

Through Week 5, Higbee's numbers in the passing game were career highs and flat-out great, regardless of player or position. A needed safety blanket for Matthew Stafford, Higbee was averaging 9.6 targets and 6.6 catches per game on a 25% target share with a 78.4% route participation rate.

After Week 5, when Stafford took 5+ sacks for the third time in five games, Higbee's role was effectively neutered. In the two games since, Higbee's averaged just 4.0 targets and 1.5 catches on an appalling 6% target share. His snaps staying in line have risen too, with just a 60.8% route participation rate over the last two weeks.

It's not a coincidence Higbee's lessened role has coincided with Allen Robinson's two most productive games of the season. There's been an acknowledgment L.A. needs to help on the edges and keep Higbee in line more frequently, and an adjustment, in turn, to heighten Robinson's involvement.

That's the reality of the Rams' passing game now and in this reality, Higbee's receiving yards total doesn't reflect his role.

With an 11.5-yard jump from last week and still fairly mediocre play, I am not touching Allen Robinson's yards this week. I am, however, very interested in Robinson's receptions total, which remains at 3.5, where it has closed each of the last four games.

An extension of Higbee's increased presence in line has been an increase in Robinson's importance, despite his early season struggles. After averaging 4.6 targets on an 11.9% target share through the first five weeks, Robinson's received a sizable uptick in both, with 6.5 targets per game good for a 19.6% share over L.A.'s last two games.

That production still does not match up to the money the Rams gave him this offseason and the breathless excitement around the addition in camp but it is absolutely fine for a No. 2 wide receiver. It's also absolutely fine for Over bettors looking for just four catches out of Robinson on Sunday.

Volume and what should be a competitive game will be enough for Robinson to go Over this line, which he has done in back-to-back five-catch games.

As the season progresses, we should only see the pendulum swing further in White's favor and away from Lenny, whose play is getting closer and closer to that of Jaguars-era Fournette. In the meantime, L.A. is unlikely to present a get-right spot for Fournette as a pass catcher.

While the Rams' defense as a whole has been a middle-of-the-pack unit this season, they've defended running backs exceptionally well in the passing game. On a per-game basis, L.A.'s allowed 5.8 targets, 4.7 catches, and 38.1 yards to tailbacks, all of which are in the Top 10 marks among defenses — and considerably more impressive when considering the Rams have seen Christian McCaffrey twice this year. 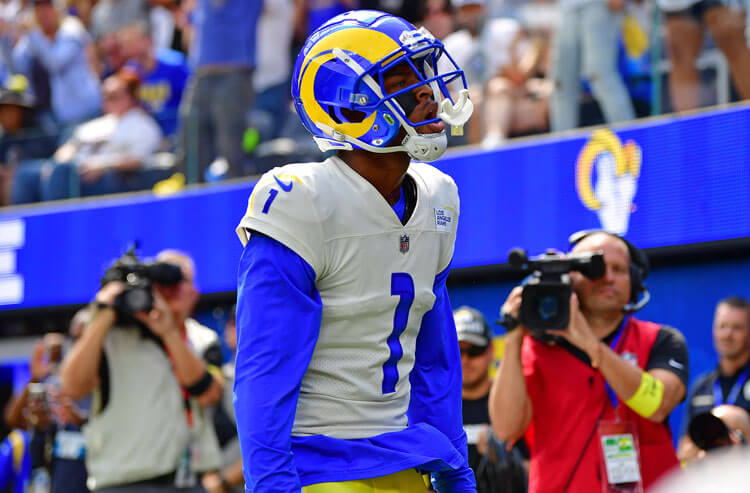