Super Bowl 50 prop bettors can wager on everything from Beyonce's outfit, to Donald Trump, to Cam Newton's "Dab", and much, much more.

In the midst of all the Big Game hype, sports bettors can sometimes forget that Super Bowl is supposed to be fun.

Plenty of people take Super Sunday wayyyyyy too seriously, and miss out on a great time. Hey, tight ass! It’s the last NFL game that matters until next September, so enjoy it while you can. Although, if you’re a fan of either the Broncos or Panthers, please feel free to be on edge all Sunday. You’ve earned it.

Thankfully, for the rest of us, oddsmakers know how to have fun on the biggest betting day on the calendar. It seems like every year, the Super Bowl props get a little more wacky and twisted, and Super Bowl 50 is no exception. 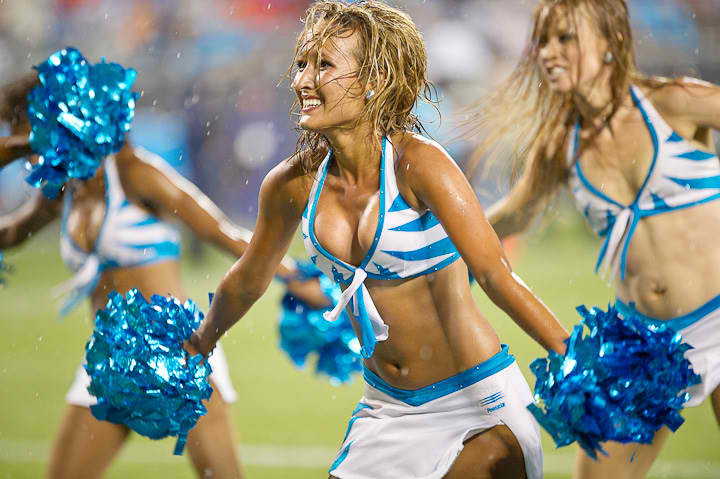 In the spirit of F-U-N, here are some of the most off-the-wall prop wagers available for Sunday’s Big Game:

This prop has been a headache for online bookmakers (the only ones allowed to offer this prop, as Nevada has regulations that prohibit offering odds on subjective results), going back to Christina Aguilera’s rendition of the “Star-Spangled Banner” at Super Bowl XLV.

Not only did she botch the lyrics – singing, “Whose broad stripes and bright stars through the perilous fight, What so proudly we watched at the twilight's last gleaming” – but she added a “Wooo!” at the end of the anthem. Some books counted that outburst towards the prop on “How long the national anthem would be”. Others did not, and mayhem ensued.

As of Saturday afternoon, game organizers have yet to announce who will sing the national anthem at Super Bowl 50. Maybe after rumors that a few Arizona bettors had inside information on how long last year’s anthem would go, sung by Frozen star Idina Menzel, they’re keeping this year’s singer close to the vest.

But not having an official announcement on just who will belt out the “Star-Spangled Banner” in Santa Clara hasn’t stopped oddsmakers from opening betting on the anthem length (120.5 seconds Over/Under) as well as if the singer will omit a word from the anthem during their performance (+850).

To put the chances of that happening into perspective, Peyton Manning is listed at +1,200 to score a rushing touchdown in the Super Bowl. Manning has just 10 rushing scores in his storied career but has scored four of those TDs in his short time with the Broncos.

So if you think “Old Man” Manning can wobble his brittle bones into the end zone, than whoever they get to sing the anthem could very likely follow in X-tina’s absent minded footsteps.

The overblown story of the Super Bowl so far (remember, we have an entire week left of hype) has been the contrasting styles of the two “Big Game” quarterbacks.

On one hand, you have the veteran past-his-prime pocket passer in Peyton Manning and the happy-go-lucky dancing dual-threat QB in Cam Newton. Outside of MVP trophies (if Cam doesn’t get his this year, people should boycott the league) and the fact that they’re both former Heisman winners, these two passers couldn’t be more opposite. And their Super Bowl 50 props reflect that.

Just take a look at the Cam Newton specials popping up at online shops: Will Cam propose to his girlfriend after the game? Will he “dab” with the Lombardi Trophy? (+300) How many times will Cam do his famous “Superman” celebration? Total length of Cam Newton smiling on camera during the game – Over/Under 3:15?

Those are some fun props, right there. Jeez, the game hasn’t even started and I’m already grinning like a goof.

Now, let’s compare those to the Peyton Manning props making their way out into the wagering world: Will Manning announce retirement on the field? (+500) Will the Broncos take Manning out of the game? Will he throw an interception – Yes +110/No -130? Total number of rushing yards – 0.5 Over/Under?

That is the saddest bunch of prop odds I’ve seen since one online book opened odds on the end of the world during the whole Mayan Apocalypse scare back in December 2012.

Football bettors get to know the guys calling the game almost as well as the names playing it, so why wouldn’t books offer some fun prop odds when it comes to the Super Bowl 50 broadcast – brought to you by CBS this year.

That means witnessing Jim Nantz doin’ the damn thing like only few can, and also sitting through some headshaking analysis from color man and former Giants great Phil Simms. If you aren’t following @philsimmsquotes on Twitter, do yourself a favor and digest some of those gems. It has over 34,000 very amused followers.

And let’s not forget sideline report Tracy Wolfson and NFL rules guru Mike Carey. You can get action down on Wolfson’s hairstyle, with “Down” as a runaway -1,400 favorite versus “Up at +600, and parlay that wacky action with Carey making the wrong call on a coach’s challenge (Yes +120/No -150) during the game. Given his track record of botching his rules analysis, that prop might be the biggest "sure thing" on Super Sunday.

Other broadcast novelty props available for sampling, “Will Donald Trump be mentioned during the broadcast?” (Yes +550/No -1,400), “Will the Super Bowl broadcast have Over/Under 117 million viewers?”, and “Will there be a power outage during the game?” (+1,700) – like at Super Bowl XLVII. Let’s hope no one at Pacific Gas and Electric have some coin riding on that prop.

COLDPLAY OF THE DAY

Apparently Coldplay wasn’t enough to get the kids tweeting about the Super Bowl halftime show. Organizers felt they needed to go back to the halftime show well and pull out Beyonce and Bruno Mars again, after those two artists headlined respective halftime shows at Super Bowl XLVII and XLVIII. For fans of Super Bowl prop betting, we couldn’t be happier about the addition of more acts – it just means more crazy-ass props.

And speaking of ass, oddsmakers are offering betting on the color of Beyonce’s first curvy stage outfit during the halftime show, setting “Black” and “White” as +200 co-favorites. When the Queen B hit the stage at halftime of Super Bowl XLVII, she donned a black leather skirted getup but it isn’t like Beyonce to wear the same thing twice.

The smart money on this prop isn’t on black or white, or even a blue or red outfit (both +550). With this being the 50th Super Bowl and the league adopting a golden theme (those golden 50-yard lines and gold-trim apparel) to go along with the “Golden Anniversary” of the Big Game, Beyonce wearing a gold ensemble at +800 is perhaps the most-valued packed prop on the whole damn board.

The halftime show props don’t stop at Beyonce, though. You can bet on whether a member of Coldplay will display an American flag on stage (+550), display a Union Jack (+1,700), wear a Broncos or Panthers jersey (+500), or wear sunglasses (+800) during the halftime show.

Coldplay lead singer and Gwyneth Paltrow’s baby daddy, Chris Martin, will pay out at +275 should he sport a hat (No -500) during the performance and fellow headliner Bruno Mars is a -400 favorite to wear a collared shirt during his time on stage, with any other design of shirt going off at +220. Mars wore a white shirt, black tie and sequent jacket when he performed at Super Bowl XLVIII in New York.

Looking back at setlists from their most recent performances, we find “A Head Full Of Dreams” opening many of their gigs. It’s a newer song from the band but has the size and energy to fit the opening-song mold set by past halftime acts. It falls under the “Other” category which is giving +300 odds.

BETTING ON A HIGHER POWER

One of my favorite novelty Super Bowl prop options is “Who will the Super Bowl MVP thank first?”, and solely for the reason that you can literally bet on “God”, who sports bettors often find themselves praying to in close games but not actually wagering on.

Last year, “God” was actually an underdog at +500 behind “Team” at +150. This time around, the Big Man Upstairs is a co-favorite with the MVP’s teammates at +200, thanks in large part to Cam Newton who, after winning the national title with Auburn in 2011, thanked God during his postgame interview.

Peyton Manning, on the other hand, while he is a devote Christian, keeps his faith off the football field for the most part. When he won Super Bowl MVP back in 2007, Peyton gave plenty of props to his teammates but didn’t verbally thank them. This year, if Denver does upset Carolina to help Manning go out on top, he’d better thank his team. They’ve carried his aging arm all season.

Last year, I put in work when it came to this prop, taking a good chunk of my work day to seriously handicap the “Color of the Gatorade bath” reserved for the winning coach. I had to dig into some old videos, image feeds and archives, getting 14 years’ worth of history on the celebratory soaking.

Last February, Super Bowl XLIX saw a rain of blue thirst quencher pour on Patriots head coach Bill Belichick and his staff as they group hugged following Malcolm Butler’s goal line interception. That gave prop bettors a nice payday at +750 if they bet on blue as the color. Not only was that a long shot in terms of color odds but it was the first time in 15 Super Bowls that blue Gatorade was the weapon of choice. 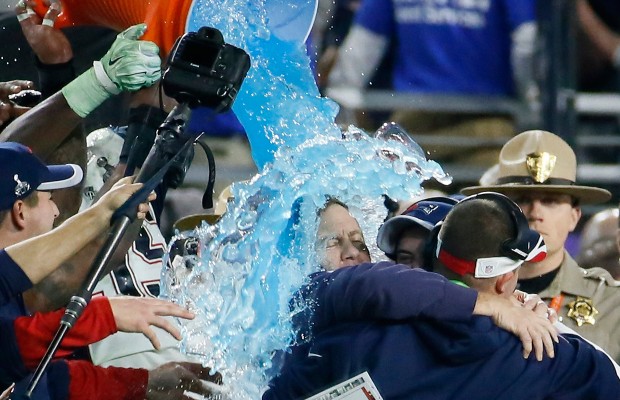 For the sake of Ron Rivera and Gary Kubiak, let’s just hope the Gatorade bath doesn’t get ugly, like this…

Editor's note: This contains parts of a previous article published in January 2015. 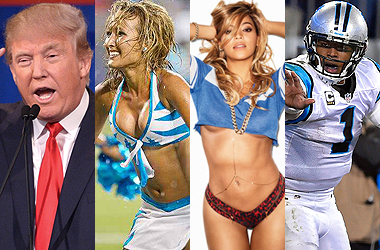