With the 49ers finally at full strength, the stars are aligning for Jimmy Garoppolo to be maximized inside the offense. We highlight the best bets for the starting QB in our Monday Night Football spotlight picks below.

The NFL returns to Estadio Azteca in Mexico City on Monday night, as the San Francisco 49ers battle the Arizona Cardinals.

The 49ers appear to be in prime position to take advantage of a Cardinals team in disarray, as Kyler Murray and DeAndre Hopkins are both listed as questionable with hamstring injuries. This figures to put a burden on Arizona’sf shaky defense.

San Francisco’s offense is as healthy as it’s been all year, and that includes quarterback Jimmy Garoppolo, who’s been the starter since Week 3. With an eye on a potentially strong performance, here are my three favorite Jimmy Garoppolo prop picks for Monday Night Football.

You can also read our 49ers vs. Cardinals picks and predictions in addition to our best Monday Night Football prop picks.

Over bettors on the Jimmy Garoppolo passing yards prop appear to have a significant edge on Monday night.

Garoppolo is averaging 253.9 passing yards per start this season, which factors out the 154-yard effort off the bench in Week 2 against the Seahawks following the season-ending ankle injury suffered by Trey Lance.

He’s had at least 240 passing yards in four of his last five games, and it would have been five of his last six if he got one more yard through the air against the Rams in a Week 4 win.

Jimmy G takes on a porous Cardinals defense that ranks 23rd in passing yards allowed per game (247.1). Even if this unit has an average day – and the environment will be anything but that – Garoppolo would still clear this line.

The Eastern Illinois product has made a habit of torching this Arizona defense in his career. In five lifetime meetings, Garoppolo has averaged 318 yards per game against the Cardinals. In his only game against this opponent last season, Jimmy G went for 326 yards on 28-of-40 passing.

He may not throw that many times in this one if the game gets out of hand, but he should still have plenty of leeway to clear this low passing yards bar.

Garoppolo was blanked in the passing touchdown department against the Chargers last week despite his team’s win, but he should have a much better showing in this category in Mexico City.

Jimmy G had a four-game streak with exactly two passing touchdowns interrupted in Week 10. He was able to accomplish this against the Panthers, Falcons, Chiefs, and Rams, the first three teams being anything but elite in this area. The Cardinals have struggled to stop the pass in all facets this year, so they should be added to the list.

Arizona’s pass defense has coughed up a staggering 17 touchdowns through 10 games. Only the Chiefs, Steelers, Titans, and Commanders have allowed more scores through the air this season.

Garoppolo has not just racked up passing yardage against Arizona in five prior head-to-head battles. He’s also accumulated 13 touchdowns with his arm in those five games, or 2.6 per contest.

This is a fair enough line and price on this prop, so bettors should take the plunge.

Calling his own number at a big number

I wouldn’t recommend placing this pick in a same-game parlay, but Garoppolo’s odds to score a touchdown with his legs are juicy, and it’s worth a small part of your bankroll.

Jimmy G has scored a touchdown in two separate games this year, including last week’s effort against Los Angeles. He crossed the plane with the ball in his hands three times in 2021.

Garoppolo is not likely to break off a long touchdown run, but he’s capable of sneaking it in or running a bootleg at the goal line.

The Cardinals are susceptible to that type of attack, as they rank 28th in the NFL in red zone defense with a 67.5% opponent touchdown rate once they reach the 20-yard line. 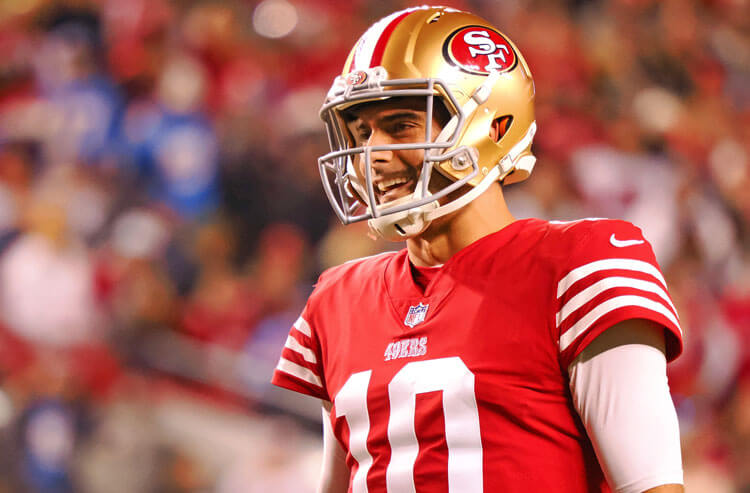