DeAndre Hopkins has averaged 9.5 receptions over his last two games and is now getting Kyler Murray back under center. See why our NFL prop picks are backing another big day from the Cardinals wideout against the Chargers.

The Thanksgiving hangover is done, and it's time to get serious with Sunday's NFL player props.

The props are trickling in, but I've found a couple I'm more than happy to add to the card for Week 12. I’m hitting the Over on the most efficient quarterback facing the least efficient defense and betting on a high reception total that checks all the boxes.

Seattle’s offense has a great matchup in Week 12 following its bye. Geno Smith, Kenneth Walker, and the Seahawks face a Las Vegas defense that ranks 31st in EPA/play and dead-last in EPA/dropback.

In their last five games, the Raiders have faced Russell Wilson, Matt Ryan, Trevor Lawrence, Andy Dalton, and Davis Mills. That is a bad stretch of opposing quarterbacks, but that quintet still managed to average 22.4 points per game, 250 yards passing, and an insane 75% completion rate.

The Raiders have been getting gouged on the ground which is creating a very efficient passing attack for opposing quarterbacks. Now, the Silver and Black have to deal with the league’s most accurate QB in Smith.

Although I do think Walker will have a big game, Smith will benefit as much as the previous opposing QBs have vs. Las Vegas. With an effective run game comes a more efficient passing game and no QB is more efficient than Smith, who leads the league with a 72% completion rate which is a league-high 6.2% higher than expected.

Smith hasn’t thrown for more than 275 yards in six straight weeks, but he has made at least 20 completions in five straight without passing the ball more than 34 times. The Seahawks are still passing on 58% of their plays this season, which is a league-average mark, while the Raiders allow the highest completion percentage against at 71.2% and are giving up 24.3 completions per game.

Seattle isn't a slow team in terms of pace of play, and Smith has been getting Walker more involved in the passing game which creates higher catch-rate targets. His love for his tight ends also means that he is making higher probability throws. More efficiency is on the way Sunday.

Even without Kyler Murray getting him the ball, DeAndre Hopkins averaged 9.5 catches for 94.5 receiving yards in the two games with Colt McCoy under center. Now with Murray back, Rondale Moore out, and Greg Dortch doubtful, this offense will center around Hopkins in a game with the highest total on the board this Sunday.

Since returning to the lineup, Hopkins has caught at least nine balls in four of his five games. He has a 76% catch rate and is hogging 32% of the team’s targets. Only Davante Adams has a higher target share over that stretch.

With the injuries to receivers and a possible negative game script, I don’t see how Hopkins doesn’t see another 12-14 targets Sunday vs. the Chargers.

Murray practiced in full this week and his hamstring injury shouldn’t affect his throwing motion. He’s peppered Hopkins since returning and with Marquise Brown likely returning, it could open up even more open targets for Hopkins as Brown draws the safety help away.

At just 8.7 yards per reception, Hopkins is not getting too far off the line of scrimmage and getting plenty of high-probable catches. The Cardinals have also struggled to run the ball, meaning Hopkins will be the chain mover Sunday. Since Week 7, no player has caught more balls than Hopkins, with 45 over five games.

This one checks a lot of boxes including matchup, opportunity, production, game script, and environment. At plus money for eight grabs, I’m all-in on Hopkins.

James Conner had two very difficult matchups without Kyler Murray. He faced the Rams and 49ers but still managed three rushing touchdowns and had a very healthy share of the offensive workload. Now, he gets to face the Chargers, who have arguably the worst rush defense in football this weekend.

Over the last two weeks, Conner has taken 35 of the team's 41 RB carries and has added five catches on eight targets. With Eno Benjamin waived, the carries are all Conner’s and with a bottom-feeding rush defense on deck Sunday, it wouldn’t surprise me to see him have a big day, especially with Murray likely returning and keeping the Chargers honest.

The Cardinals also fired their O-line coach and run game coordinator following last week so hopefully, positive changes are in store Sunday in a great matchup vs. a defense that allows over 1.0 rushing TDs per game and currently has five defensive linemen on the injured reserve.

Conner might not be a sexy runner between the 20s, but inside the 20 is where he makes his living, with 19 rushing touchdowns in just 298 carries over the last two seasons.

Not many markets are open but a Conner TD is the play here for me, with a player who has a great matchup, opportunity, and production.

It feels like I haven’t touched a Christian Kirk prop since Week 3, but this week could be a different story. He’s one of five receivers with a 30% target share over the last four weeks and should be ready to hit some Overs coming out of the bye vs. a very average Baltimore pass defense.

Since Week 7, Kirk has totaled 38 targets, which he has turned into 27 grabs for 317 yards. He topped the 100-yard mark for the first time since Week 1 in his last game, and the bye might have some bettors sleeping on him in a great matchup.

Passing conditions will be good in Jacksonville on Sunday and the Jags are more than a 3-point home underdog, meaning a negative game script could be in the cards for the home side.

The Jaguars’ run game wasn’t on point either before the week off and the Jags passed at a 74% clip in Week 10. They also claimed Darrell Henderson, which shows they aren’t thrilled with where their run game is.

If Trevor Lawrence is forced to pass the ball 40-plus times again, Kirk and his season-long 25% target share will soak up the extra work. He was hot before the bye and gets a great matchup Sunday to continue a strong stretch.

It’s Mike White time in New York this week versus the Bears, and for those who followed him last season, that means a ton of check-downs to running backs.

In the two games White started and finished last season, he completed 51 of 99 passes. Of those 99 attempts, 37% were to his running backs, who accounted for 25 of the 51 receptions. That number is insane.

Michael Carter and Ty Johnson both had heavy workloads in the passing game with White under center, and that familiarity should be on display again Sunday with White making his fourth NFL start.

In the three games that White saw the majority of the snaps last year, Carter amassed 21 catches on 29 targets which accounted for 58% of all his receptions on the season. Even with a minimal role in the passing game before White took control of the offense, Carter didn’t disappoint when given the opportunity.

With a reception total of 2.5 that is offering good plus money to the Over, I have no issues hitting the Over with confidence this week in a good matchup against the Bears.

It’s check-down season in the Meadowlands, and Carter is a great target for his Overs as well as his alternative Overs.

Things are looking pretty one-sided for the Chiefs at home Sunday vs. the Rams.

Matthew Stafford (neck) has been ruled out, and the Chiefs sit as 15-point favorites facing a Bryce Perkins offense with no Cooper Kupp and a decimated offensive line. Time of possession will be in the favor of the home side, and that could mean a season-high in usage for Kansas City running back Isiah Pacheco.

Pacheco is coming off his best game as a pro, as the rookie ran 15 times for 107 yards last week vs. the Bolts. Now with Clyde Edwards-Helaire on the IR, Pacheco should get the majority of early-down carries on Sunday against the Rams.

Pacheco’s rushing total sits at 57.5 yards, which is only a three-yard increase from last week when he was sharing rushing duties with CEH. The opponent is much more difficult this week. Still, I think the potential for the majority of the early-down work makes this total an easy play to the Over at this number, especially with the Chiefs running the ball at one of the highest rates all season last week (44%).

The matchup will keep this number from ballooning, but the offense and time of possession should make for plenty of opportunities to run on early downs. With CEH out, it’s Pacheco’s backfield.

Since Week 8, Terry McLaurin has been the second-most targeted receiver in football at an astounding 33.7%. He’s seen 35 targets over the four-week stretch and could be in for another heavy target share Sunday vs. the Falcons and their 29th-ranked pass defense.

McLaurin’s receiving total is at 60.5 yards this week which is shorter in Week 10 against the Texans and eight yards shorter than in Week 9 vs. the Vikings. He hasn’t been held to Under 55 yards in five straight weeks and is averaging 85 receiving yards per game under Taylor Heinicke.

The Falcons rank 27th in EPA/dropback and allow the most receptions to opposing wide receivers at 14.8 per game. Only three other teams allow more receiving yards to the position as well. It’s a solid matchup for the Washington passing game. 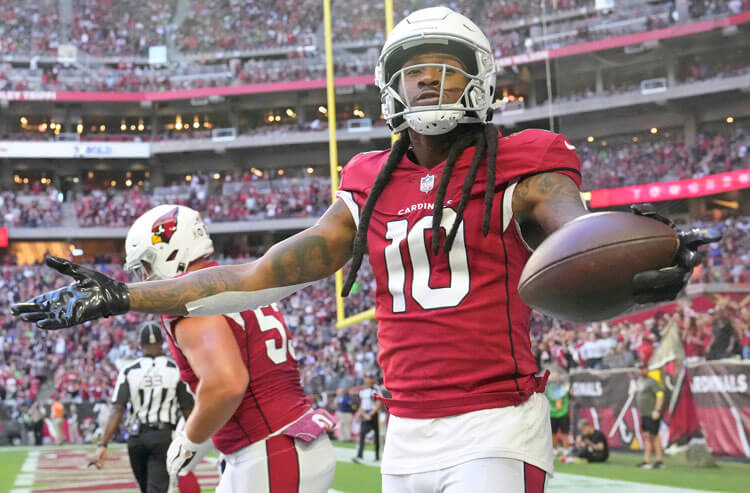