Joe Flacco's yardage numbers are impressive, but poke at them a bit and they start to look fairly empty. See why our NFL betting picks like the Bengals to clamp down on the Jets in Week 3.

The Cincinnati Bengals will look to finally get in the win column on Sunday as they visit the New York Jets for a Week 3 matchup.

The Bengals may be the defending AFC champions, but they’ve started the 2022 season with two tight losses. The Jets got their first win last week when Joe Flacco led a miraculous comeback in the final two minutes to beat the Cleveland Browns.

If the Jets want to keep Cincinnati winless on the year, it will take another big performance from Flacco. We’ll take a look at whether he can keep up his hot start in our best NFL picks and predictions for Bengals vs Jets on September 25.

Bengals vs Jets picks and predictions

Joe Flacco is no longer the player who won the 2012 Super Bowl MVP and generated debates over whether or not he was an elite quarterback. But the 37-year-old has been putting in great work for the Jets in the absence of starting quarterback Zach Wilson, who is still recovering from a right knee injury.

In two games, Flacco has thrown for 616 yards, good for third-best in the NFL. He also leads the league in both attempts (103) and completions (63), as the Jets have been playing from behind for almost the entirety of the first two weeks.

However, there are a lot of caveats buried in that performance. Flacco needed 59 attempts to go for 309 yards against a porous Baltimore Ravens defense in Week 1. Baltimore followed up that performance by giving up 469 yards and six touchdowns to Tua Tagovailoa last week.

Statistically, Flacco’s game against the Browns looks better, as he threw for 307 yards and four touchdowns without an interception on just 44 attempts. But it’s worth remembering that Flacco threw for 123 of those yards in the last two minutes, when the Jets shouldn’t have even had the ball. If Nick Chubb takes a knee at the one instead of scoring on Cleveland’s last drive, Flacco’s numbers wouldn’t look nearly as good.

The Bengals have been better against the pass than either the Browns or Ravens,  giving up an average of just 211 yards on the season. That’s part of an overall strong defensive effort that has been let down a bit by the Cincinnati offense thus far.

Unless Flacco has somehow become a better quarterback than he was even in his prime — and can continue exceeding expectations on a Jets team that doesn’t have the weapons his old Ravens teams had — we can safely expect his numbers to come back down to Earth on Sunday. Flacco has only averaged 232.7 yards passing for his career, and that number has predictably fallen as he has aged. The Bengals will also be focusing on the pass and daring the Jets to beat them on the ground, which should limit Flacco’s attempts.

None of this seems to be reflected in Flacco’s prop markets this week. I’m taking the most generous Under I can find on his passing yardage prop, as I expect the Jets quarterback to struggle against a Cincinnati defense eager to force turnovers and deliver its first win of the year.

A) Garrett Wilson Over 51.5 yards and a touchdown BOOSTED to +335 at BetRivers! Bet Now

While many books opened this game with Cincinnati as a four-point favorite, bettors have pushed that number up to six over the course of the week. That’s more in line with some of the lookahead numbers posted back before Week 2, and shows that bettors aren’t putting too much stock into the results of the first two games.

Coming off a trip to the Super Bowl, the Bengals have started the season in shocking fashion, losing their first two games. However, both losses were close. They dropped a 23-20 overtime decision to the Pittsburgh Steelers in their opener, then fell 20-17 on the road against the Dallas Cowboys in Week 2.

The Jets could easily be 0-2 as well, and nobody would have been a bit surprised. Only two touchdowns and a recovered onside kick in the final two minutes allowed New York to beat Cleveland last week. A win is a win, but it would be a mistake to accept the 35-34 score against the Browns at face value, considering the bizarre circumstances that led to that win.

The Bengals have lost outright twice as touchdown favorites, so they’re naturally 0-2 against the spread as well. Still, the fact that the Bengals are a smaller favorite visiting the Jets than they were at the Cowboys last week is a case of recency bias. Cincinnati is still the far more talented team, and the Jets haven’t done anything to earn the respect of bettors so far.

The total has crept up in this game, but remains at a reasonably low 44.5 after opening at 43. The middling number reflects uncertainty over how both offenses will perform going forward after uncharacteristic starts.

I’ve harped on this again and again, but it’s important to put the Jets’ outburst against the Browns in proper perspective. It shouldn’t have happened in the first place, and it comes after New York managed just nine points against a weak Ravens defensive unit.

We can’t entirely discount the fact that the Jets scored those two late touchdowns — they do show that Flacco and the receiving core have some big-play ability — but it’s worth remembering that New York has struggled offensively for about all but two minutes of the season. The Jets face a tougher test against a solid Bengals defense that has kept Cincinnati in games while the offense has struggled.

That Cincinnati offense revolves around quarterback Joe Burrow, who threw four interceptions against Pittsburgh and managed just 199 yards in the air against Dallas. Burrow hasn’t gotten any help from the Bengals offensive line, which has allowed a league-high 13 sacks on the year.

That number should come down this week. The Jets pash rush has only generated three sacks this year, and Pro Football Focus grades the New York coverage unit as the fourth-worst in the league. That should make Burrow’s job easier as he looks to finally start looking like the quarterback who led the Bengals to the Super Bowl last season. An improved passing game should also open up running lanes for Joe Mixon, who has rushed for just 139 yards so far this year.

The Under is 7-0 in Cincinnati’s last seven games. Find more NFL betting trends for Bengals vs. Jets. 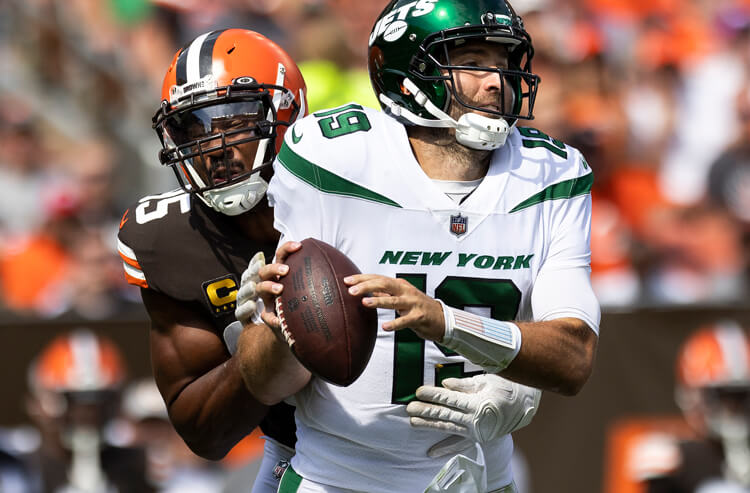