Despite three straight wins, Wyoming's offense is one-dimensional and should struggle to score against BYU's defense. As such, our college football betting picks are targeting the first-half Under as we expect both defenses to control this game early on.

BYU was riding high after an overtime win over Baylor but crashed down to earth in an uncompetitive loss at Oregon in Week 3. How will the Cougars respond?

A home clash against Wyoming is next. Craig Bohl’s team cannot be taken too lightly after notching an outright upset against Air Force last Friday night as three-score underdogs.

Will BYU get back on track or will Wyoming prove better than the betting market anticipated yet again?

Check out our college football betting picks and predictions for Wyoming vs. BYU.

Wyoming vs BYU picks and predictions

College football fans are likely left with a bad taste regarding Wyoming after Week 0’s dud against Illinois. With more eyeballs than normal watching, the offense fell completely flat. That's a difficult stink to air out.

Quarterback Andrew Peasley, a Utah State transfer, completed just 5 of 20 passes for 30 yards and no touchdowns. It was a brutal display of incompetence, but it must be kept in mind that there is no preseason in college football and this is a team hit hard by the transfer portal — of course they didn’t look at their best in Week 0 against a Big Ten opponent.

Since that 38-6 loss in the opener, Craig Bohl’s squad has done nothing but win. The Cowboys have won three straight, notching wins against Tulsa, Northern Colorado, and Air Force. Typical of Bohl, the defense has been the calling card the last two weeks. Northern Colorado was limited to a measly 147 yards on 2.5 yards per play, while a fearsome Air Force attack mustered just 272 total yards.

Kalani Sitake’s squad got off to a hot start with a blowout win over South Florida and then parlayed that with an overtime victory over the defending Big 12 Champion Baylor Bears.

Oregon had other things in mind in Week 3, however, as the Ducks rolled to a 41-20 victory in Eugene. A defense that returns 11 starters showed signs of vulnerability while allowing five total touchdowns to Ducks QB Bo Nix and 6.9 yards per play overall. They enter Week 4 as the No. 19 team in the country with something to prove.

Although BYU’s defense struggled against the Ducks, this is a prime bounce-back spot against a bad Wyoming offense that ranks 129th in explosiveness and 102nd in power success rate. This Cowboys team wants to run the football, but BYU knows that and will load the box with an experienced defense that returns 11 starters. Ranking 95th in offensive line yards isn’t going to cut it for the Cowboys in a smashmouth offense.

Wyoming doesn’t have a lot of firepower offensively and BYU’s defense should have every opportunity to fix its lapses from a week ago.

I don’t expect Wyoming to put many points on the scoreboard given the offense’s struggles and one-dimensional nature, and they’ve been playing stout defense on the other side of the ball while BYU had had issues running the football.

I expect a low-scoring first half given the nature of this matchup.

Wyoming is 2-5-1 ATS in its last eight road games, while BYU is 8-1 ATS in its last nine home games against a team with a winning road record. This should be a prime bounce-back spot at home for a good, veteran BYU squad against a Wyoming team that played above its head a week ago and doesn’t have the offensive weapons to keep pace.

The question is whether or not this spread is too wide. BYU signal caller Jaren Hall is a great quarterback who Bohl praised effusively in press conferences this week. His receiving options have been limited, however, as starters Gunner Romney and Puka Nacua have been out with injury. Chase Roberts has emerged as a legitimate weapon, leading the team in receiving yardage in each of the first three games.

These two foes have a long history but have not met much since 2011 after BYU went Independent. The Cowboys have struggled in the last few matchups, for what it’s worth, going 2-6 ATS over the last eight meetings.

In order to find a cover in this spot, it will be crucial for Wyoming to keep this a low-scoring game while taking advantage of a BYU rush defense that was burned by Oregon all game and by Baylor in the fourth quarter.

Wyoming has stayed true to Bohl’s formula this season, playing solid defense while the offense leaves a lot to be desired. The offense’s 40% success rate will need to improve, while the defense’s 42% success rate is admirable.

Injuries in the receiving room likely play a big part in those numbers, and the team will see a boat if Nacua or Romney can give it a go this week. Both were considered game-time decisions a week ago but ultimately did not suit up.

Neither team is operating at a fast tempo, as BYU ranks 71st in players per game while Wyoming checks in at 105th.

Wyoming is 21-7-1 to the Under in its last 29 games against a team with a winning record. Find more NCAA betting trends for Wyoming vs. BYU. 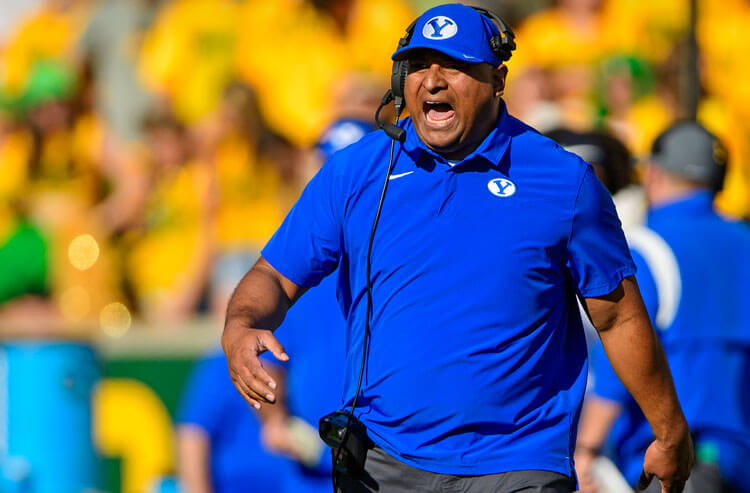