Western Kentucky vs Hawaii Odds, Picks and Predictions: No Gold at Rainbow's End

Western Kentucky's offense is bound to regress this season, but against a defense as bad as Hawaii's, it probably won't matter. Find out why our college football picks are fading the Rainbow Warriors' resistance any way we can.

It should be a fun nightcap on the island as two offensive-minded teams meet in Week 1.

Both teams played in Week 0 and already have a game under their belts.

The Western Kentucky Hilltoppers had a close one with FCS school Austin Peay before pulling away in the fourth quarter for a 38-27 win. The Hawaii Rainbow Warriors had a much different outcome in their opener, getting trounced 63-10 by lowly Vanderbilt.

What’s the betting side for Week 1’s nightcap?

Check out our college football picks and predictions for Western Kentucky vs. Hawaii on Saturday, September 3 to find out.

Western Kentucky opened -12.5 and even dipped to as low as -11 at one point before Hawaii’s Week 0 performance caused a stir in the betting market. The Hilltoppers are currently -15.5 to -16.5 depending on the market. The total opened at 62 but is 67.5 as of writing.

Be sure to check out the full college football odds before placing your bets, and also view the full line movement for this game.

The Over is 6-1 in the Hilltoppers’ last seven non-conference games. Find more NCAA betting trends for Western Kentucky vs. Hawaii.

Before beginning this handicap, let’s acknowledge that both programs are anticipated to take a step back in 2022.

Western Kentucky finished 9-5 last year thanks to a prolific offense that averaged 44.2 points per game — second in the country behind only Ohio State. Not bad! Quarterback Bailey Zappe and receiver Jarreth Sterns transferred in from Houston Baptist to stay with Zach Kittley, who joined the school as offensive coordinator after coaching the two at the Huskies.

Zappe rewrote the NCAA record for passing yards (5,967) and touchdowns (62) while Sterns accumulated 150 receptions for 1,902 yards and 17 touchdowns — yes, those numbers are for last season alone! Those players are both gone, and Kittley is now coaching at Texas Tech. Second-leading receiver Mitchell Tinsely (1,402 yards, 14 touchdowns) transferred to Penn State. The offense sputtered out of the gates in Week 0 without its superstars on hand, as new quarterback Austin Reed averaged only 5.5 yards per attempt in the first half against Austin Peay in a game that was 21-20 heading into the fourth quarter.

Hawaii takes a massive step back in 2022 after a tumultuous offseason in which Todd Graham was fired following a mass exodus via the transfer portal. Things got so bad that his own son transferred away from the team. The starting quarterback, running back, leading receiver, and several impact defensive players all hit the portal. First-time head coach Timmy Chang has a long rebuild in front of him with a depleted roster, and that much was clear in a humiliating 63-10 loss at home against Vanderbilt to start the year.

The Rainbow Warriors return only six starters this year, ranking 127th in returning offensive production and 130th in returning defensive production. They haven’t settled on a quarterback to run this scheme and lost WR1 Zion Bowens to injury in the first quarter against Vanderbilt. The defense figures to be among college football’s worst and could be in for another rough game against the Hilltoppers.

Expect a lot of points for this nightcap between two offensive-minded teams.

Kittley may be gone, but the Hilltoppers kept around his disciple, Ben Arbuckle, to lead the offense. The style of play won’t change much at all, as they’ll air it out and try to feature receivers like Malachi Corley (three touchdowns in Week 0) and Daewood Davis (124 yards, one touchdown).

Reed was a Division II national champion for West Florida and is capable of making a suspect Rainbow Warriors defense pay. Hawaii returned only two starters defensively, and it showed against Vanderbilt. The Commodores racked up 601 total yards of offense on a massive 8.3 yards per play.

Hawaii didn’t show much offensively against the Commodores, but it looks like they’ll run a version of the Run and Shoot — a welcome return on the island. Both Brayden Schager and Joey Yellen saw time at quarterback in the opener and while neither looked good, this Hilltoppers defense looked suspect in pass defense against Austin Peay. It’s a continuation of poor defensive play after allowing 437 total yards per game on 5.7 yards per play a year ago.

Both teams will try to win games by getting into a shootout this season. One operates the Air Raid (Western Kentucky) while one operates the Run and Shoot — two offenses that look to air it out. Both defenses are questionable at best, while Hawaii’s appears to be downright awful.

It’s difficult to overstate just how bad Hawaii’s defense looked in the opener. The Commodores are certainly no juggernaut, yet they ran for over 400 yards on the ground on 9.2 yards per attempt. The Hilltoppers will chuck the ball all over the yard and stretch this Rainbow Warriors defense to its limits.

Austin Reed showed promise at quarterback despite struggling in the first half against Austin Peay, coming through with two touchdown passes in the fourth quarter. The offensive game plan is to score as many points as quickly as possible, and Hawaii’s turnstile defense should be more than happy to oblige.

I’m playing the Hilloppers to go Over their team total of 41.5 points.

Did you know that if you parlayed our Western Kentucky vs. Hawaii picks, you could win $59.58 on a $10 bet? 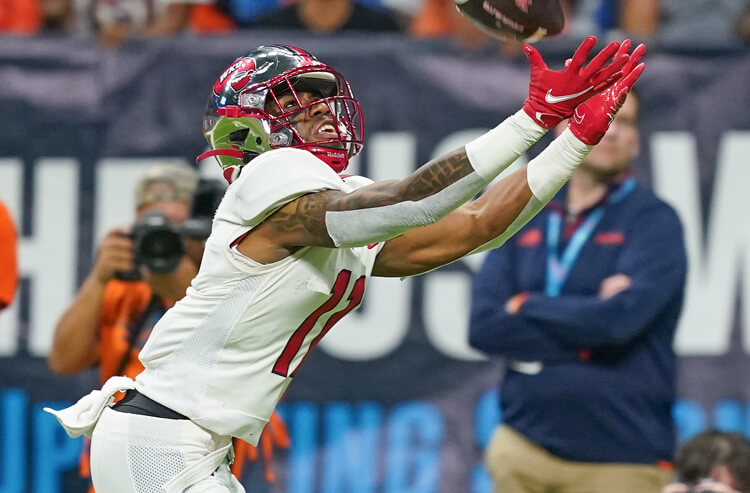 Western Kentucky vs Hawaii Odds, Picks and Predictions: No Gold at Rainbow's End
Provided by