USC vs California Picks and Predictions: Pac-12 After Dark Finale

In keeping weird the weird theme of "Pac-12 After Dark", USC and Cal square off... in a regular-season game to cap off Championship Weekend. Neither team has anything to play for, so with motivations low our college football picks expect points to be high.

What’s this? A regular-season game being played on Championship Weekend?

The USC Trojans and California Golden Bears face off in a rescheduled game late Saturday night. Pac-12 After Dark often offers up strangeness for college football betting fans’ viewing pleasure — and this odd nightcap to conference championship week is no exception.

Will it be the Trojans or the Bears who end their season on a high note as they head to the offseason?

Find the answer to that question in our picks and predictions for USC vs. California on Saturday, December 4.

Cal has taken significant money, opening at +1.5 and moving all the way to -4.5 at the time of this writing. The total has also moved significantly, opening at 52.5 but currently sitting at 57.5.

USC vs California picks and predictions

This is a highly unique game, so we can’t use traditional handicapping methods. This game is not being played in a vacuum. The original matchup on November 13 had to be rescheduled due to COVID protocol on the Cal side, forcing these teams to play a rescheduled game on Championship Week. With this being such an odd circumstance surrounding the game, we’re going to focus primarily on motivational factors.

Both teams are out of bowl contention at 4-7, so there’s no edge there. USC garnered all the headlines with the surprising hire of Lincoln Riley, but he won’t be coaching in this game. The interim staff, led by Donte Williams, is understandably facing a tough task motivating the team to play yet another game in what’s been a difficult season.

Wednesday’s practice was even delayed amid rumors of player protests. Put yourself in their shoes: it’s been a frustrating season full of letdowns, the original head coach was fired after Week 2, and now you have to play one more meaningless game under a coaching staff that will largely be ripped apart following the game.

To put it bluntly, this is a total play-against spot for the Trojans.

At least there is positive momentum to point to for Cal. After starting the season 1-5 SU, the Bears have rebounded and gone 3-2 SU over their final five games. They play better when they can establish the rushing attack, going 4-0 SU in games where they rush for over 200 yards. USC also has tackling issues and has given up at least 150 rushing yards in five of its last six games.

USC isn’t fired up to be playing in this game — that much is clear. We’ll fade them in a terrible motivational spot and ride with Cal.

This total took significant money to the Over since the opener, jumping a full five points. We’ll be following that steam in a game that we believe should see a lot of scoring.

Despite the inconsistencies and downright poor play as a collective team, USC has moved the ball well offensively. The Trojans rank 25th nationally with 446.8 yards per game, led by a passing attack averaging more than 300 ypg. Freshman quarterback Jaxson Dart looks the part of a future star and will be amped up to prove his worth for Lincoln Riley, who will be watching this game closely.

The Trojans have not, however, been great defensively, ranking outside the Top 95 in all major yardage categories. Cal should be able to move the ball on the ground with its 57th-ranked rushing attack matching up well with USC’s 96th-ranked rushing defense.

Veteran quarterback Chase Garbers has played well in 2021 and leads the Pac-12 in total yardage per game at 280.

While we recommend both the spread and the total, we feel most confident in the Over.

This coaching staff chose Dart as the starter midway through the year as they believed he had the talent to be this program’s quarterback of the future. They’ll be looking to showcase the freshman’s talent as Riley plans his offensive attack for future years and would be remiss to not let Dart air it out.

Cal’s offense has been hit or miss but had 636 yards against Stanford and 520 against Oregon State in recent outings. USC’s defense has been beatable all year.

We expect both teams to score. 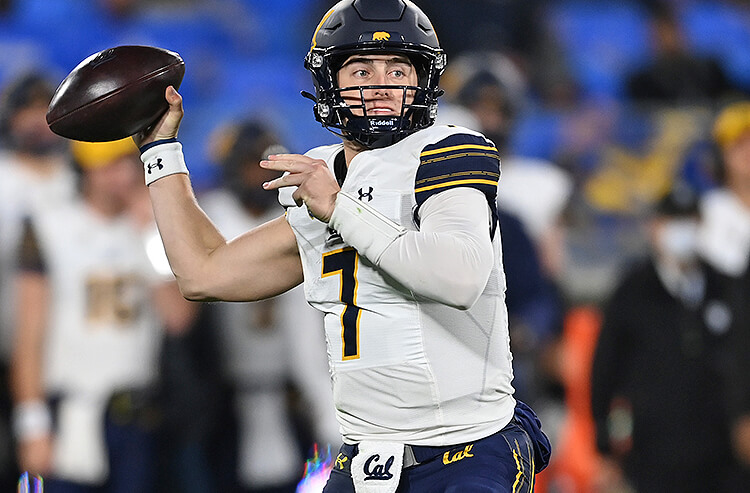 USC vs California Picks and Predictions: Pac-12 After Dark Finale
Provided by