Tulane vs Oklahoma Picks and Predictions: Washed Away by the Sooners?

Hosting Heisman favorite Spencer Rattler and the Oklahoma Sooners would be difficult enough but now, instead, Tulane will head to Norman to visit the Big 12 side. Find out if the Green Wave can cover a 31.5-point spread in our picks and predictions.

This meeting between the Tulane Green Wave and Oklahoma Sooners was supposed to be played in New Orleans, but it’ll instead be played at Gaylord Family – Oklahoma Memorial Stadium in Norman, Oklahoma at 12:00 p.m. ET on Saturday, September 4.

Having to play on the road in such a crazy atmosphere is definitely a tough blow for the Green Wave, but the Spencer Rattler show will undoubtedly be more fun for viewers in front of a sea of red.

Will the Green Wave find a way to avoid a massive blowout? You’ll want to keep reading our Tulane vs. Oklahoma picks and predictions to find out.

Going from playing a home game to playing in Norman definitely doesn’t help Tulane’s chances in this one. Under head coach Lincoln Riley, the Sooners are 10-0 straight up and 7-3 against the spread when playing at home in games with totals between 63.5 and 70 points. The team is also 14-1 SU and 9-6 ATS in September games, with four of those wins coming in their last five.

With Spencer Rattler once again running Riley’s offense, this Sooners team is going to be absolutely impossible to stop. Rattler arguably has the most arm talent in all of college football, and he has the weapons on the outside to help him turn in a ridiculous statistical season.

Marvin Mims is one of the best wideouts in the country, and there’s nobody on the Green Wave that can stay in front of him. However, Oklahoma should also be able to shred this Tulane defense on the ground. The Green Wave had the 42nd ranked rushing defense in college football last year, which is actually pretty good. But, the team no longer has Cameron Sample, who was an elite defensive lineman and especially important as a run stuffer. That should clear the way for transfer Eric Gray, a potential star out of the backfield, to rush for over 100 yards in this one.

Also, this Oklahoma team might be known for its offense, but the Sooners have turned a corner defensively with Alex Grinch as defensive coordinator. Last year, Oklahoma was one of only 19 FBS teams to give up fewer than 5.2 yards per play in more than eight games. The Sooners return eight starters from that unit, including linebacker Nik Bonitto. Bonitto is a pass-rushing stud, which means Michael Pratt isn’t going to have a lot of time to sit back there and throw. Pratt should be in for a good year with Tulane, but this is a bad matchup for him and this offense.

A pretty large majority of the tickets on this game are on the Over, but the cash is nearly split and the total has dropped. That means that the sharp money is on the Under, and it actually makes a lot of sense.

For starters, the weather isn’t exactly supposed to be perfect in Oklahoma on Saturday. There’s going to be some decent winds and the forecast suggests there might be some rain throughout the day. If that’s the case, the Green Wave might really struggle to throw the ball. The same goes for the Sooners, but they have the type of ground game to continue to score points regardless. And, Riley has a lot of quick-hitter passing plays to get the ball in the hands of his talented wideouts. But the point is that the game could turn one-sided, which would be bad for Over bettors. They need some points out of the Green Wave on offense.

There’s also the fact that if this game turns into a blowout, Oklahoma isn’t likely to continue throwing the football — even if the weather allows it. The Sooners will run some clock and look to get the game over with.

The reality is that this total is just insanely high. A final score of 49-17 would mean an Oklahoma cover and a win on the Under. That seems like the type of outcome to expect in this one. 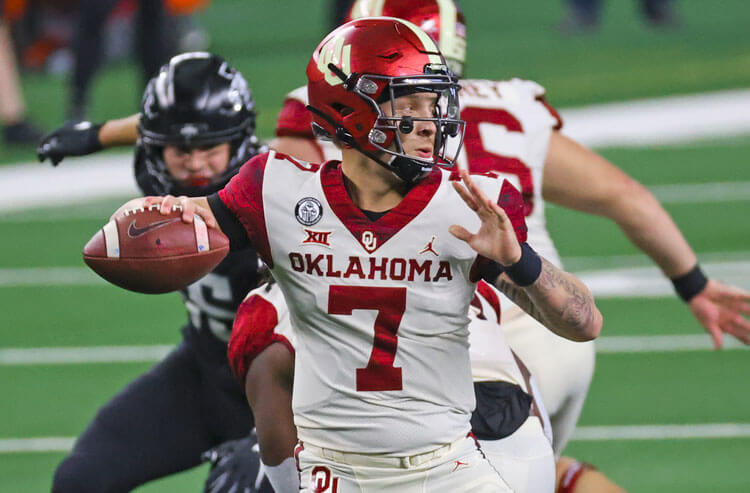 Tulane vs Oklahoma Picks and Predictions: Washed Away by the Sooners?
Provided by