UCLA pounded Hawai'i in Week 0 but takes a big step up in competition against LSU in Week 1. But before you insta-bet LSU: These aren't the same Tigers we're used to — they're trying to rebound from an ugly 2020 and are breaking in two new coordinators.

LSU will kick off its 2021 season against the 1-0 UCLA Bruins, who are fresh off a 44-10 shellacking of Hawai'i. It’s safe to say that the Tigers will prove to be a much stiffer test than the Rainbow Warriors in what will be the first meeting between the two schools.

The Tigers will be eager to prove that they are back after a tumultuous 5-5 campaign as defending National Champions. While some Power 5 teams opt to schedule a “cupcake” matchup to start the year off with an easy win, LSU will waste no time getting straight to business as it flies to the West Coast to do battle with an impressive Bruins squad.

This is one of the most intriguing college football betting matchups of Week 1. Can Chip Kelly exorcise his SEC demons? Will the Tigers get back on track under the guidance of two new coordinators?

Check out our free college football picks and predictions for LSU vs. UCLA on Saturday, September 4 and find out.

UCLA is 7-0 ATS in its last seven games when rushing for 200+ yards in the previous game. Find more NCAA betting trends for LSU vs. UCLA.

UCLA appears to have finally taken a turn in a positive direction under Chip Kelly. It finished with a losing record in 2020 but there were clear signs of progress — the Bruins' four losses came by a combined 15 combined. They have some much-needed stability this year, returning 10 starters on both sides of the football.

Although it was against a low level of opposition, it was clear in the Bruins’ opening game that the progress they made a year ago has carried over to this season: They dominated Hawai'i in every facet of the game, essentially entering garbage time by halftime.

A big key for them will be establishing the run — they averaged 4.5 line yards per rush in the opener and will need to move the ball efficiently on the ground to cover. The LSU defense was a hot mess last year, but it should have a massive addition by subtraction following the firing of former Defensive Coordinator Bo Pelini.

That said, LSU was decent in spots against the rush last season after a shaky start. If the Tigers play up to their talent, they may prove to be one of the tougher rush defenses that UCLA has faced in the last couple of seasons, although it’s hard to trust the Tigers after allowing 4.9 yards per rush and 18 rushing touchdowns a season ago.

Regression was expected from the Tigers last year but head coach Ed Orgeron was displeased enough with the results to bring in new offensive and defensive coordinators. They’ll look to recapture the magic of former OC Joe Brady, as LSU brought in two of his assistants to take over the offense. They will try to help QB Max Johnson build on his strong finish from last season, when he led LSU to a startling upset over Florida and a thrilling Bowl win over Ole Miss, accumulating 480 yards of total offense and five touchdowns.

Also of note, Hurricane Ida has temporarily displaced the Tigers, forcing them to practice in Houston after an 11-hour bus ride across state lines. The Bruins, meanwhile, are humming on all cylinders after a Week 0 warm-up.

We’re taking the points with the Bruins.

While both defenses may be improved from a year ago, this should be a back-and-forth affair featuring two good offensive attacks and two dangerous QBs.

Despite completing just 50 percent of his passes for just 130 yards and one touchdown against Hawai'i, UCLA's Dorian Thompson-Robinson is a legitimate dual-threat on the field. He threw for 1,120 yards with 12 touchdowns — while running for 306 yards — in seven games last year. As mentioned above, the Bruins' Week 0 game got out of hand quickly, so Thompson-Robinson really didn't need to do a lot — we expect him to have a much bigger impact this week.

Defensively, however, it’s hard to go from awful to good in one offseason — and that’s exactly what this Tiger defense was a year ago: awful.

We’re taking the over. 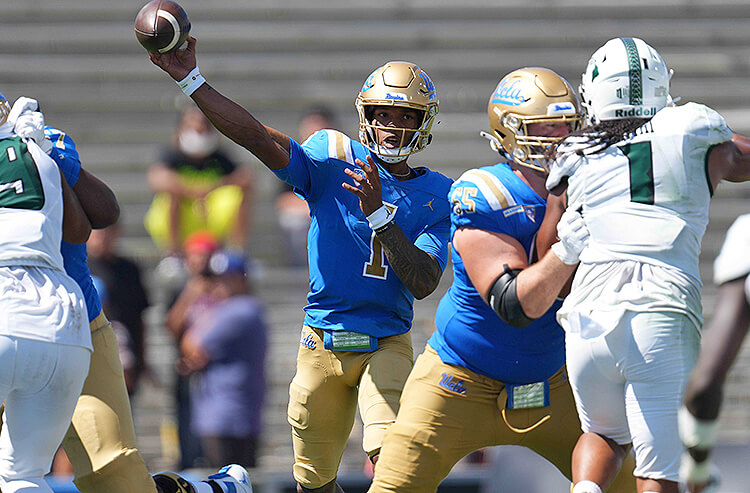