Penn State vs Wisconsin Picks and Predictions: Badgers Have the Edge in Week 1 Big Ten Battle

College football betting in Week 1 features a Big Ten battle between nationally-ranked programs when Penn State visits Wisconsin. Both squads are looking to rebound from ugly 2020 seasons — see why we think Saturday will be the Badgers' day.

Penn State and Wisconsin will kick off one of the most hyped Week 1 Saturdays for college football betting in quite some time. The Nittany Lions and Badgers are two Top-25 AP-ranked teams playing in conference play — and I’m not even sure that this game is among the three best matchups in Week 1!

Still, the game itself should be a dynamite contest between two teams looking to gain a new identity moving forward after questionable 2020 seasons, with the Badgers as slight 4.5 home favorites.

Here are our best free college football picks and predictions for Penn State vs. Wisconsin on Saturday, September 4, with kickoff set for noon E.T.

Under is 4-0 in the Badgers' last four games against Big Ten opponents. Find more NCAA betting trends for Penn State vs. Wisconsin.

Wisconsin is looking to put their COVID woes in the rearview after it basically wrecked the Badgers' 2020 season. Wisconsin destroyed Illinois to start the season last year, behind a fantastic performance from quarterback Graham Mertz. However, the team caught COVID and didn’t play the next two weeks against Nebraska and Purdue.

When Wisconsin returned to action, Mertz and the Badgers dominated Michigan in a 49-11 win. That’s when early Heisman talk started to gain steam on social media, as many thought Mertz had what it took. However, it seemed like COVID and everything else took a toll on Wisconsin as it lost to Northwestern the following week, scoring just seven points in the 17-7 loss. Then the Badgers lost to Indiana, scoring six points. Then the following week, Wisconsin scored a single touchdown and lost to Iowa 28-7.

So what’s it going to be in 2021? Will we get the Mertz that dissected Illinois and Michigan... or the one that struggled to get anything going offensively against ranked opponents?

The reality is, Wisconsin needs to find its identity again. The Badgers need to run the ball effectively and until they do that, the offense will struggle. Last year, Wisconsin ran the football for 200+ yards just once — Jonathan Taylor would be ashamed.

On the other side, Penn State will have senior QB Sean Clifford, who threw for 1,883 yards last season along with 16 touchdowns but also threw nine interceptions. The big eye-popping stat of it all is that Clifford took a whopping 22 sacks last season in nine games. Compare that to 2019, when Clifford was sacked just 24 times in a full season.

Wisconsin should have the better defense with Penn State losing a number of key players. The secondary could be solid with a veteran group but outside of that, the Badgers look way better on paper — and there’s zero chance I trust Penn State’s offensive line against Wisconsin’s front seven.

As mentioned above, Penn State was terrible on the defensive end to start last season, but it turned it around later on and finished the 2020 campaign allowing 27.7 points per game along with just 3.67 yards per carry and 5.06 yards per play.

Don't expect the Nittany Lions defense to come out flat this Saturday. In addition to Penn State finishing the season strong on the defensive end, Wisconsin struggled offensively to conclude its season.

When you put it all together, both teams should start to even out their play. Wisconsin is a better offense than what they showed in the second half of the season while Penn State is certainly better than allowing 30 points a game.

With this being a tight, conference battle and both squads wanting to put their best foot forward, we're expecting this game to be a low-scoring affair. 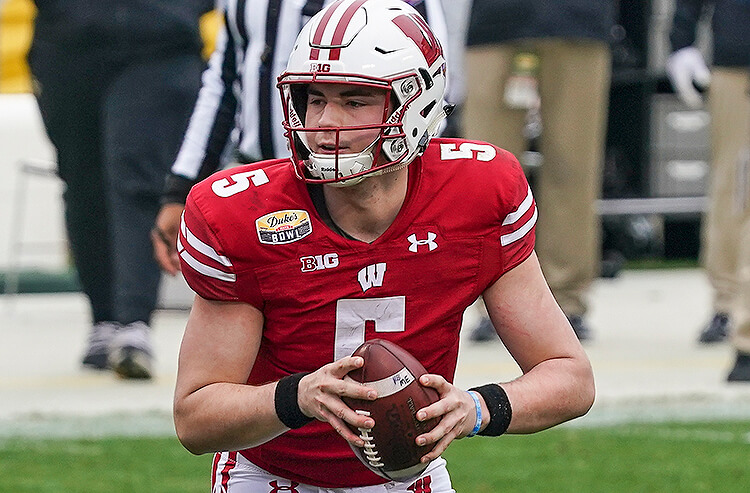 Penn State vs Wisconsin Picks and Predictions: Badgers Have the Edge in Week 1 Big Ten Battle
Provided by