Despite some friction between these two head coaches, there's nothing to suggest New Mexico State will be able to stop Mohamed Ibrahim and the Golden Gophers. Back Minnesota against the huge spread — as our college football betting picks break down.

It would usually be nearly impossible to gin up animosity between the New Mexico State Aggies and the Minnesota Golden Gophers, but it became too easy this offseason.

Aggies head coach Jerry Kill not only used to coach the Gophers, but he spent two seasons as the boss of current Minnesota head coach, P.J. Fleck. When Fleck took over in 2017, he said some things that irked Kill enough to remain an issue when Kill took over at NMSU, knowing this meeting awaited.

Kill has openly said he doesn't intend to shake Fleck’s hand, while Fleck has tried to downplay any friction between the two. Could that frayed relationship impact the final score?

Read our free college football picks and predictions for New Mexico State vs. Minnesota to find out.

Tracking a Week 1 line can be difficult all summer, but this game opened with Minnesota favored by 38.5 points in late May or early June, depending on the book. By the end of July, it had been knocked down to -37.5, and that continued to fall until it reached -36 this past weekend, at which point it bounced back up to -36.5.

The total also fell over the summer, opening at 57 in late May and dropping to 56 by the end of July. Then, in just this past week, it plummeted to 52.5.

Minnesota finished the 2021 season by covering the spread in its final three games, while New Mexico State is 1-4 ATS in its last five, including losing to Nevada on Saturday. Find more NCAA betting trends for New Mexico State vs. Minnesota.

Simply put, the Gophers should be at least five touchdowns better than the Aggies. Pick your metric, and Minnesota is that much better. Trusted college football analytics suggest this should be greater than six touchdowns, but the nature of a blowout can actually temper the rout.

According to ESPN’s Bill Connelly, New Mexico State ranks No. 102 in returning production this season, compared to Minnesota’s No. 51. Furthermore, that Gophers rating may be lower than it should be if then factoring in the return of sixth-year running back Mohamed Ibrahim. His play should not be trumpeted because he is such a veteran, though that does not hurt, because he is that good when healthy.

He had Minnesota in the mix with then-No. 4 Ohio State in last year’s opener before a torn Achilles felled him and the Gophers’ upset chances. He took 30 carries for 163 yards and two touchdowns that day, and even if the Buckeyes’ rush defense was suspect in 2021, that 5.43 yards per rush average were on par with Ibrahim’s career pace of 5.49 yards per rush.

He has taken 547 carries in his career and will now add another two dozen against a thoroughly woeful defense. New Mexico State gave up 4.0 yards per carry to Nevada in a 23-12 loss on Saturday. The Wolfpack averaged 77.4 rushing yards per game last season, and then returned just 29% of its total production this year, No. 130 in the country, ahead of only Hawaii’s 27%.

Ibrahim is due for a moment of glory, a moment of celebration, a moment of relief in his return. His bowling ball runs alone could propel Minnesota toward this cover.

The Gophers can study the Aggies’ film, and that is more useful in prep than getting in a game’s worth of reps for New Mexico State.

The Aggies scored 12 points against what will be one of the worst defenses in the country on Saturday, and two of those came on a safety in the first few minutes.

New Mexico State gained a nearly-respectable 5.1 yards per play, but remove one 67-yard completion and that average falls to a plodding 4.07 yards per play.

The Aggies’ hopes of an upset of Nevada, or merely covering the closing spread, were undone dramatically by four interceptions and a lost fumble, but even if those turnovers had not occurred, there was little assurance New Mexico State could further extend those drives based on its general offensive struggles.

Now facing a defense returning three of its Top-4 tacklers that gave up 17.3 points per game last year, the Aggies’ struggles should be much more difficult Thursday.

If New Mexico State cannot contribute two touchdowns, it is difficult to envision Minnesota pushing this game Over its total all on its own.

The Kill-Fleck dispute traces back to when Fleck took over at Minnesota. Kill’s former defensive coordinator Tracy Claeys had succeeded him in leading the Gophers, but when Claeys supported his players boycotting practice after 10 players were suspended due to their alleged roles in a sexual assault case, he was soon fired.

When Fleck arrived in Minneapolis, he later made some remarks about adjusting the culture in his program. Kill took that to be an attack on what he had built before health issues forced him aside, and he apparently still feels that way, being very openly critical of Fleck these last few weeks.

But Fleck has remained diplomatic, and he may try to ease up amid a rout as an attempt at an olive branch. That is only a piece of speculation, but it is enough to scare this handicap off the large spread for the whole game.

Fleck will obviously not pull up in the first half, though, lending some credence to taking the Gophers through halftime, as Ibrahim should have no trouble repeatedly leading the offense to the end zone.

Did you know that if you parlayed our New Mexico State vs. Minnesota picks, you could win $59.58 on a $10 bet? 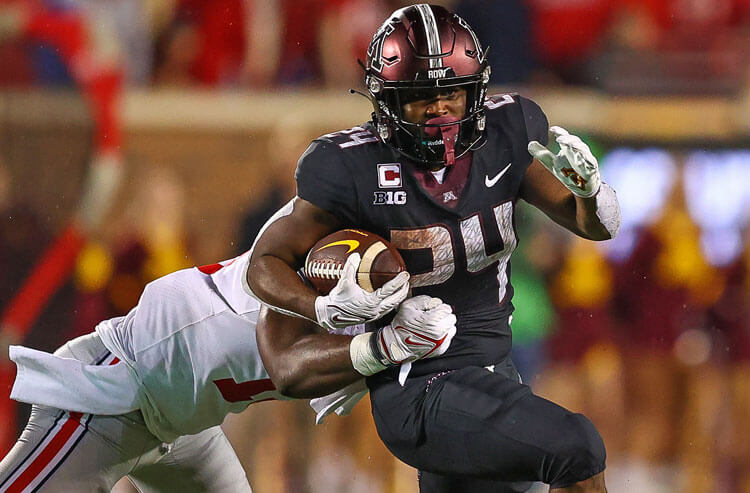