Kentucky is coming off a strong defensive effort against the defending national champs, and should continue to succeed on Saturday against a program that they have gotten the best of in recent years. Read more in our Louisville vs. Kentucky betting picks.

The No. 25 Louisville Cardinals knocked off ranked North Carolina State on Saturday ahead of a matchup with bitter instate rival Kentucky, who dropped a second straight game in a 16-6 defeat to No. 1 Georgia last week.

The 6-5 Wildcats ranked as high as No. 7 this season but have stumbled through the second half of the season, with five losses in their last seven games. On Saturday, UK will get a chance to finish out the regular season on a high note when the Cardinals, who have lost three straight in the series, visit Kroger Field.

Louisville vs Kentucky picks and predictions

Coming off a shocking defeat to Vanderbilt at home, Kentucky had its back against the wall when Georgia came to town. While the Wildcats’ offense continued to struggle — as was to be expected against one of the best defenses in college football — Kentucky stepped up on the other side of the ball, holding Georgia (ranked 11th in FBS in points per game) to its lowest points total of the season.

Georgia quarterback Stetson Bennett went 13-of-19 for 116 yards and threw an interception to earn his lowest quarterback rating of the season.

The Bulldogs nearly shut out Kentucky all four quarters, but UK attempted to rally late with an eight-yard touchdown pass from Will Levis to Barion Brown. The Cats could have closed the gap further with nearly four minutes to go in the fourth, but Matt Ruffolo missed on his field-goal attempt following a bad snap.

The Cats finished the game with 206 yards passing and 89 yards rushing, while UK was just 3-of-11 on third down and 1-of-3 on fourth down.

Kentucky should have an easier time running the ball against Louisville on Saturday. The Cards rank in the bottom half of the ACC in rushing yards allowed (139) and let Clemson average 5.5 yards per attempt in their 31-16 road loss.

That setback snapped a four-win streak for Louisville, who struggled through the opening half of the season, with a 31-7 loss to Syracuse and a 35-31 defeat against Florida State at home.

The Cards benefitted from a three-game homestand beginning in Week 8, but on the road, Louisville has just one win against a team with a winning record (UCF).

Louisville also has had a bad history with UK ever since Scott Satterfield assumed head coaching duties in 2019. Since then, the Cats have won three straight, and none of those outcomes have been close.

The Cards seem to have found a new spark in the second half of the season, though, with a pair of victories against ranked opponents over their last four games.

Louisville will play Kentucky much tougher than it has in the past, but the Cats will have the upper hand in Lexington.

Behind backup quarterback Brock Domann, the Cards generated 153 yards through the air and got another 192 on the ground, including 105 from sophomore back Jawhar Jordan.

The Wolfpack rank second in the ACC in rushing yards surrendered (101.4) but allowed Louisville to average 4.9 yards per attempt. Jordan scored twice in the game, with one touchdown coming on a 98-yard kickoff return. The Cards' defense was also impressive, holding North Carolina State to 214 yards passing while recording an interception and yielding just 2.5 yards per carry to the Wolfpack.

But points were hard to come by in the first half. Aside from Jordan’s kickoff return touchdown, the Cards' only points came from three field goals. Kentucky’s offense is having issues of its own in the first half, scoring no more than seven points before the break in each of its last six. However, UK’s defense gives reason for hope that it can frustrate the Cards (especially against the pass) and stay in this game, even if the Cats' offense comes out sluggish.

The line for this game opened between 3.5 and 4.5 and has settled at 2.5 points at most books. The Cards are 5-1 against the spread in their last six games overall and 4-1 ATS versus teams with a winning record, but 1-6 ATS in their last seven versus the SEC.

Louisville is also 1-4 ATS in its last five meetings with Kentucky and 5-5 ATS in the last 10.

The total has hovered around 43 points throughout the week, but the score has not dipped below 43 in the last seven games between these teams.

Since 2014, the average total score is 69, with last year’s result in Louisville reaching 73 points.

Cunningham and Levis were the starting quarterbacks on each side in 2021, with Levis throwing for 149 yards on 14-of-18 passing and Cunningham putting up 145 yards on 12-of-20 passing with an interception.

Levis reached the end zone four times by running the ball, while Chris Rodriguez added a score and led all rushers with 121 yards.

This season, the Cards have improved their run defense but still have plenty of room for growth. Against the pass, however, they rank fifth in the ACC and are the second team in the nation in turnovers gained, with 28.

The Under is 8-0 in UK’s last eight versus a team with a winning record, 4-0 in its last four home games, and 11-1 in its last 12 games overall. Meanwhile, the Over is 6-1 in the last seven head-to-head matchups.

The Under is 4-1 in Louisville’s last five games overall and 8-0 in UK’s last eight versus a team with a winning record. Find more NCAA betting trends for Louisville vs. Kentucky.

When Will Sports Betting Be Legal In Kentucky 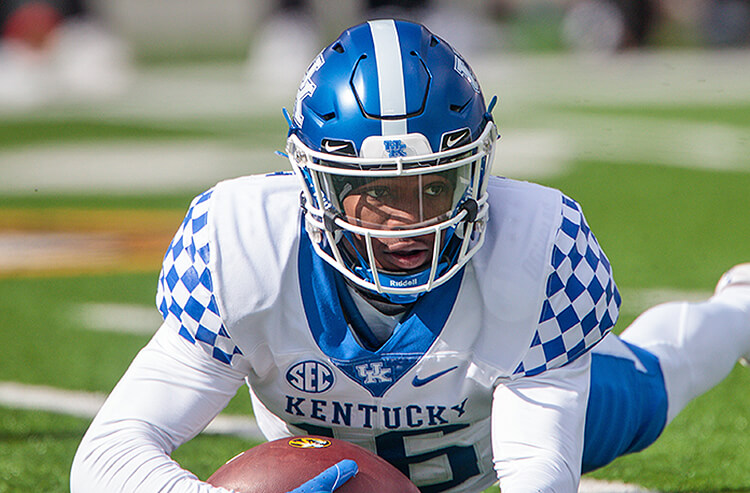 Louisville vs Kentucky Odds, Picks and Predictions: Defense Will Carry Wildcats
Provided by