Texas went from 4-1 to 4-7 and just wants this nightmare season to end. But there's still one game left against a ferocious Kansas State defense. The Longhorns are college football betting home favorites, and we're totally fading them vs. the 7-4 Wildcats.

It’s absolutely insane to think that the Texas Longhorns went from 4-1 to 4-7 this season, but here we are. Steve Sarkisian’s team is going to need a ton of help in order to make It to a bowl game, making Friday’s meeting with the Kansas State Wildcats all about heading into next year on a positive note.

Despite having next to nothing to play for, the Longhorns are still home college football betting favorites against the 7-4 Wildcats. Are the Longhorns going to roll over in a home matchup against K-State?

Find out the answer in our college football picks and predictions for Kansas State vs. Texas on Friday, November 26.

The Longhorns opened as 2.5-point home favorites and have since moved to 3-point favorites at the time of writing. The action has been pretty split to this point, so there could be some sharp bettors on Texas. Most of the total action in this game has leaned towards the Over, and the total has moved from 52 at open to 52.5. Use the live odds widget above to track any future line movements right up until kickoff and be sure to check out the full college football odds before placing your bets.

It’s not impossible for Texas to make it to a bowl game, but it would need to win this game and finish 5-7 to even have a chance. Then, Texas would need some more help along the way, but the Longhorns can’t worry about that — They need to strictly focus on finding a way to beat the Wildcats, and it’s just hard to see that happening.

Wildcats quarterback Skylar Thompson was wearing a boot after injuring his left ankle against Baylor last game and his presence would really be missed if he’s unable to go in this one. Thompson is one of the best dual-threat quarterbacks in the conference and he has the experience required to go on the road and win a tough game. However, even if he’s not out there, asking this emotionally drained Texas team to win a game that doesn’t mean all that much for its players its a tough task.

For all the talk about the Longhorns’ explosive offense, the team has scored 24 or fewer points in four of its last five games. And even if Casey Thompson — who is a much more dangerous player than Hudson Card because of his ability to run — is out there, there’s no guarantee that Texas will score enough points to win this game. Kansas State has allowed just 16.6 points per game over the last five weeks and the team has the 21st-best rushing defense in the nation. Without Texas being able to run the ball, it’ll be hard on either Longhorns QB to make plays in the passing game.

Offensively, Deuce Vaughn should run wild on this disastrous Texas defense. The Longhorns have allowed at least 200 rushing yards in three of the last six games, while Vaughn has rushed for over 100 yards in each of his last four. If he’s shredding Texas on the ground, it won’t matter who’s under center for the Longhorns — Texas will need to overcommit to stopping Vaughn, allowing these Wildcats receivers to run freely.

Both Kansas State and Texas have gone Under the total in four of their last five games coming into this matchup. The Wildcats have become one of the best defenses in football over that span and they’re actually now 27th in the nation in points per game allowed.

Kansas State is giving up just 21 ppg this year, with the defense getting to face a deflated Texas team. Whereas the Longhorns have very little to compete for in this one, the Wildcats have the opportunity to silence the fans in Austin — while also improving the quality of the bowl game they’ll ultimately play in.

The Under also happens to be 6-2 in the last eight meetings between these programs. The last time these teams met in this stadium, the two combined to score just 51 points in a 3-point Texas win.

With the work Kansas State will be able to do on the ground in this one, the clock should also run pretty frequently.

It’s definitely oversimplifying things to just talk about how much this game means to each team, but it's hard to imagine the Longhorns matching the intensity of the Wildcats in this game — and intensity kind of matters in football.

Also, while Sarkisian is a very impressive offensive mind, it’s fair to question whether or not he’s a better head coach than Chris Klieman, who has now proven himself at both North Dakota State and K-State.

Klieman will never have as much talent on his roster as Sarkisian does, but he has players that play hard and play the right way. In the dog days of the season, that’s extremely important. Also, Kansas State is 8-4 ATS in road games under Klieman, while also going 8-3 ATS in November games — and a perfect 6-0 ATS (5-1 SU) against defenses that give up at least 425 yards per game — during his tenure. 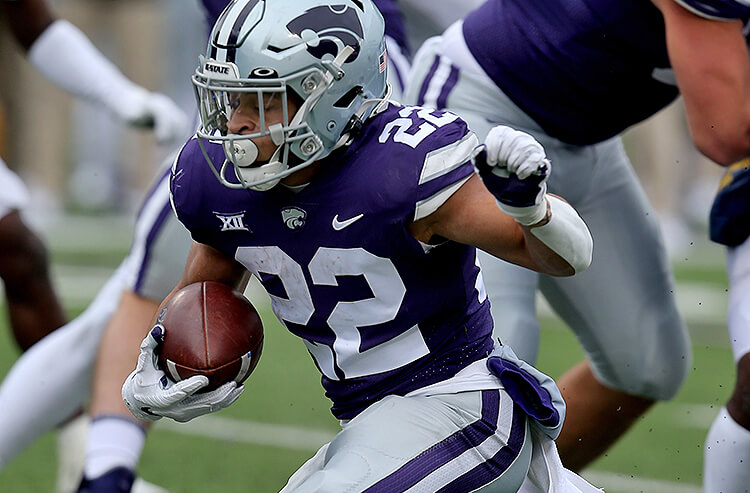