North Carolina vs NC State Picks and Predictions: Wolfpack's Defense Will be the Difference in Rivalry Game

UNC has failed to meet its lofty expectations this season, but they've shown they can compete with great teams. To close the regular season, they face in-state rivals NC State as a 6-point underdog. Find out the best plays in our UNC vs. NC State picks.

Meanwhile, North Carolina State is looking to finish the regular season with nine wins. It’s won three of their last five games, however, the two losses were by a combined four points.

Meanwhile, the total also dipped from 63.5 to 62.5 since opening at most outlets. Use the live odds widget above to track any future line movements right up until kickoff and be sure to check out the full college football odds before placing your bets.

What sticks out the most is North Carolina State’s defense. The rushing defense has held opponents to just 108.3 yards per game and the Wolfpack have faced very good rushing teams in the ACC this season.

The defense has also looked strong in coverage and has a pass rush that has been effective at times. The defense is still only allowing 213.1 yards per game this season through the air.

On offense, Devin Leary doesn’t get the love he deserves. There are some terrific ACC quarterbacks this season and Leary is in the conversation as one of the best, throwing for 3,186 yards, 31 touchdowns, and only five interceptions so far this season.

Quarterback Sam Howell is still questionable to play and missed last week’s game against Wofford. But he likely only missed this game because North Carolina was playing Wofford. I’m sure he’ll be back for this one against North Carolina State. However, the run game has been way more effective than the passing game. Partly because of Howell and partly because of the running backs.

But like we just talked about, North Carolina State has been superb in stopping the run this season, giving the Wolfpack the edge in this rivalry game.

If Sam Howell is back under center for North Carolina, this game has a complete shootout feel to it. The Wolfpack is the better offense, but Howell is just tough to prepare for.

In every North Carolina loss but the first game of the season, the Tar Heels have scored at least 22 points. That shouldn’t change in this one. On the other hand, North Carolina State has a quarterback with a chip on his shoulder in Devin Leary. Leary has been a stud all year and just hasn’t been getting the love.

It’s time to show out on national television for Leary. Take the Over.

I know North Carolina State has been extremely solid on the defensive end, however, North Carolina has seemed to find a rhythm late in the season. This team didn’t look right to start the year but with a win over Wake Forest and a couple of close losses to Notre Dame and Pittsburgh, North Carolina can absolutely hang against really good teams.

I’ll go Over on this number. And I wouldn’t wait to take it. Once Howell is confirmed starter, this line could move up a couple of points. 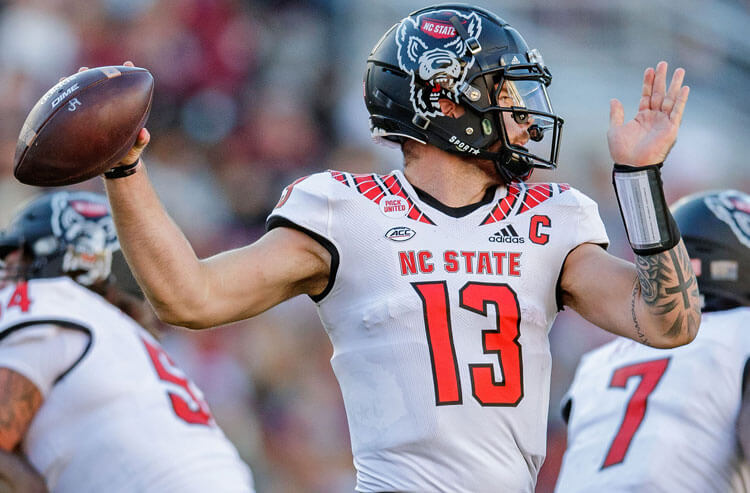 North Carolina vs NC State Picks and Predictions: Wolfpack's Defense Will be the Difference in Rivalry Game
Provided by