Boise State smacked around the Bulldogs 40-20 in the regular season, but Fresno State was without its star quarterback Jake Haener. With him back in the lineup for this championship bout, our college football betting picks expect a much different result.

The 2022 Mountain West Championship will be held on the blue turf in Boise as the Boise State Broncos (9-3) battle the Fresno State Bulldogs (8-4) for the conference title.

Boise is the favorite after rattling off a perfect 8-0 record in conference play. Head coach Andy Avalos was named the MWC Coach of the Year and looks to capitalize on a strong year with a championship.

Fresno got off to a rough start this season, but the Bulldogs got hot to end the season and finished where they were expected to in the preseason — fighting for a conference championship.

Who has the betting edge in this championship bout? Read our college football picks and predictions below to find out.

It’s been a similar story for the representatives in the MWC Championship game — both Fresno State and Boise State had disappointing starts to the season before catching fire to end the year.

Boise State started the season 2-2 and things got so bad in a 27-10 loss to UTEP in Week 4 that offensive coordinator Tim Plough was fired before the final week of October. The Broncos responded by posting a perfect 8-0 record in conference play, with their only loss since Week 4 coming against BYU in a non-conference matchup.

Fresno State, meanwhile, had a disastrous 1-4 start to the season despite preseason expectations to be at the top of the MWC. The Bulldogs have righted the ship in a big way, however, notching seven straight wins to finish the season.

Boise State’s calling card is a stingy defense, surrendering just 17.8 points per game, good for ninth nationally. The Broncos have suffocated opponents while allowing only 284.4 total yards per game, ranking seventh in total defense. The advanced numbers love them, as they check in at 10th in EPA (expected points added, garbage time excluded) and sixth in success rate.

Offensively, quarterback Taylen Green seized the starting quarterback role and never looked back, winning MWC Freshman of the Year honors while completing 64.5% of his passes for 8.2 yards per attempt and amassing 20 total touchdowns in 11 games. He brings a rushing threat that is difficult for teams to account for, accumulating 437 rushing yards and eight TDs.

It’s no accident that Fresno has won seven straight — this is among the most talented teams in the conference. Following the return of quarterback Jake Haener to the lineup, the Fresno State offense has found a new gear. The Bulldogs have scored at least 30 points in each of their last six games, with Haener returning for the last five.

The season-long stats won’t do this team justice, as the offense cratered after Haener was injured in Week 3’s loss to USC. One of those losses came at the hands of Boise in a 40-20 Broncos win back on October 8 — a result I am not giving much credence to considering that was the low of the Bulldogs’ season, and they’re now peaking at the right time.

Haener is one of the best quarterbacks in the country, especially at the Group of Five level. I believe the power ratings have not accurately accounted for his return to the lineup and how the Bulldogs have come together over the second half of the season. Give me Fresno State to at least keep things close and cover this number.

A) Troy Trojans, UCF Knights, and Fresno State Bulldogs all to win BOOSTED to +700 at Caesars! Bet Now

The line opened at Boise State -4.5 before quickly coming down to -3. Currently, either -3 or -3.5 is available depending on the sports book.

Boise State is looking for its fifth Mountain West Title, an impressive number considering the Broncos only joined the conference back in 2011. Avalos and the team have stated that a championship is the goal this season, so falling short would be a monumental disappointment after they ran the table in conference play.

However, Boise State is dealing with numerous injuries that will leave it far below full strength for the championship game. Star running back George Holani (1,212 scrimmage yards, 13 TDs) has been banged up for most of the year and that’s the case again as he was seen on the sidelines icing his shoulder during the fourth quarter of last week’s game.

Defensive lineman Divine Obichere was dinged up a week ago and joined a list of four other contributing defensive front players on the injury report. Nickel back Tyreque Jones was carted off the field against Utah State, which is especially concerning considering two other safeties were out for that matchup as well.

The 42-23 final score against Utah State a week ago is highly misleading, as Utah State was in the red zone down just five points with under 1:30 remaining in the fourth quarter before collapsing and surrendering two long touchdowns. The Broncos were outgained 468 to 428 and lost the first down battle 24 to 15.

The injuries are piling up at an inopportune time for the Broncos, while Fresno State has been surging after Haener’s return to the lineup. Fresno is 5-2 in its last seven conference games and I’m looking for that run to continue in the MWC Championship.

The total opened at 50.5 before catching a lot of steam to the Over, moving the line to between 53.5 and 54.5 depending on the book at current.

It’s expected to be a cool 30 degrees at the time of kick, but there is not expected to be any other impactful weather conditions as the wind is a moderate 6.5 mph and there is a 0% chance of precipitation.

Fresno has been an Over machine lately, notching a 5-1 mark to the Over in its last six games. Five of those games have coincided with Haener’s return to the lineup. The Bulldogs have the best receiving group in the MWC in Jalen Moreno-Cropper (984 yards, five TDs), Cal transfer Nikko Remigio (700 yards, five TDs), and sixth-year senior Zane Poper (510 yards, two TDs).

Although Boise State’s defensive metrics are elite, this is a banged-up unit that just allowed 468 total yards to Utah State, so I’d expect some points out of veteran, effective, explosive Fresno offense.

Boise State’s offense has been humming as Green gains experience. The Broncos are averaging 454.8 total yards in their last five games and should be able to score on a mediocre Bulldogs defense that ranks 67th in EPA per play and 83rd in explosiveness.

Fresno has been especially poor against the rush (95th in EPA per rush, 98th in rushing explosiveness), which is concerning news against a Boise State offense averaging 190.4 rushing yards per game.

I like the Over in this spot and believe the early money moving the line upward was justified. 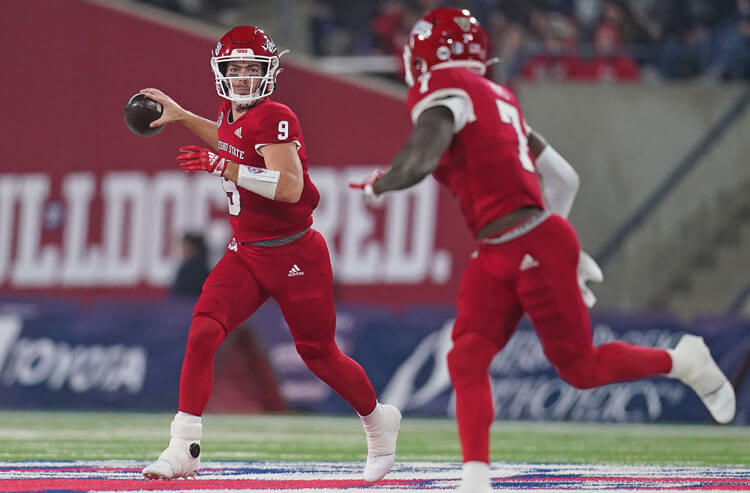