Stanford vs USC Picks and Predictions: Cardinal Come Up Short Against Trojans

The Trojans have won three straight but have revenge on their mind on Thursday, as they face a Cardinal team that upset them earlier this month. That meeting, in Palo Alto, was an outlier — our Stanford vs. USC picks break it down for you.

Winners of three straight, USC (17-2) looks to stay hot as it hosts Stanford on Thursday night.

These two teams met on January 11, with Stanford pulling off a 75-69 upset at home. Both teams were coming off a lengthy pause for that first meeting, due to health and safety protocols, and so we find a repeat of those results unlikely to happen.

Will the Trojans be able to find revenge and continue the winning streak?

Check out our college basketball picks and predictions for the Stanford Cardinal and the USC Trojans on Thursday, January 27 to find out.

Stanford opened as 11-point underdogs, and the line has stayed constant. The total has also remained constant at 140.

The home team is 5-1 ATS in the last six meetings between these two schools. Find more NCAA betting trends for Stanford vs. USC.

Stanford vs USC picks and predictions

We like USC in this spot for several reasons. For one, it’ll be motivated to find revenge after a surprising 75-69 defeat at the hands of the Cardinal two weeks ago. Both teams were coming off a sizable COVID pause for that fixture, and we find the results somewhat anomalous.

Harrison Ingram and Spencer Jones both had 21 points in that contest, a full 10 points above their respective scoring averages on the season. The Stanford offense has been dreadful of late, failing to get to 40% shooting in either of the last two games (Arizona, Arizona State). The Trojans have stepped up defensively, holding their last three opponents to a combined 34.1% shooting. We’d be shocked if the Cardinal got to 75 points yet again.

The Cardinal have not fared well on the road, going just 1-5-1 ATS in their last seven away games. USC, meanwhile, has found its groove. The Trojans came away victorious over Colorado and Utah during the Rocky Mountain road trip (no easy task) before dispatching Arizona State by 22 points.

Stanford’s 79-76 win over Arizona State last time out looks nice at first, but consider that the Cardinal attempted a whopping 41 free throws compared to just nine for the Sun Devils. It was the biggest free throw discrepancy in nearly a year in college basketball, and it was enough to cause Arizona State head coach Bobby Hurley to lose his mind. It's impossible to expect such good a discrepancy in every game.

USC is one of the tallest and lengthiest teams in the country, and it should be able to shut down this Stanford offense. The Trojans average 75 points per game and should be able to score considering the Cardinal aren’t special anywhere defensively. This isn’t exactly a tough scheduling spot for USC, as it faces lowly California next time out. We like Isaiah Mobley and company to cover the spread at home.

This Stanford offense is struggling. The Cardinal don’t shoot the ball well, having failed to eclipse 50% from the field in a game since December 23 against Liberty. Turnovers are also a big concern, as the Cardinal average 15.9 giveaways per game — the 11th most nationally. Stanford does crash the offensive glass well, but that strength should be mitigated by a USC team that ranks third nationally in defensive rebounding.

We struggle to see Stanford getting much of anything going offensively. The Trojans rank third nationally in opponent field goal percentage, holding teams to just 36.9% from the field. They’re especially sound at defending 2-point shots, ranking second nationally (40%).

Neither team plays at a fast tempo. Stanford ranks 184th in possession per game, while USC checks in at 223rd. We expect the Trojans to control the tempo of this game, and therefore a lower-paced affair should be in hand.

We have very good reason to believe that USC limits this Stanford team’s offensive output, so we’re attacking the Cardinal team total Under.

Stanford doesn’t do much well offensively and the Trojans are extremely sound at forcing difficult shots and rebounding the first opportunity. The first meeting saw an outlier performance from a Stanford offense that has been dormant for most of the season and has been ice cold from the field lately. 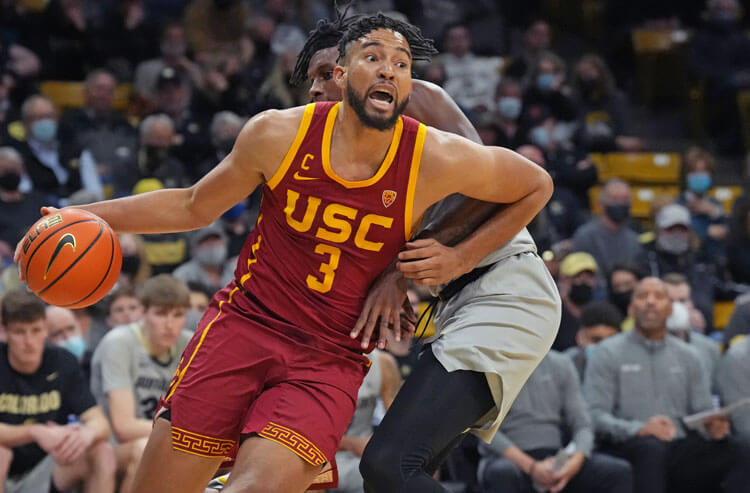 Stanford vs USC Picks and Predictions: Cardinal Come Up Short Against Trojans
Provided by