Purdue vs Iowa Picks and Predictions: Hawkeyes Hold Down Homecourt

The Hawkeyes are going to bring their A-games for this one: a home date with the Top-10 Boilermakers and chance to bolster their March resume. Find out why we think they can fight fire with fire — check out our Iowa vs. Purdue picks.

College basketball fans get a fun Big Ten showdown when the Iowa Hawkeyes host the Purdue Boilermakers on Thursday. The Boilermakers are the sixth-ranked team in the nation, but that just makes this a more important game for a Hawkeyes team that can use the win for its NCAA tournament resume.

Will the fans in Carver-Hawkeye Arena witness a home win over Purdue for the second year in a row? Keep reading our Purdue vs. Iowa college basketball picks and predictions for January 27 to find out.

The total in this matchup between two explosive Big Ten teams opened at 158.5 and hasn’t moved at all. The same can actually be said of the spread, with the Hawkeyes opening as 2.5-point home underdogs and the line staying the same.

Iowa is 33-15-3 against the spread in its last 51 home games. Find more NCAA betting trends for Purdue vs. Iowa.

Purdue vs Iowa picks and predictions

Whereas Purdue is first in the nation in adjusted offensive efficiency (all efficiency stats from KenPom.com), Iowa isn’t too far behind in seventh. So, while the Boilermakers normally have the ability to simply outscore their opponents on any given night, that won’t necessarily be the case against the Hawkeyes. Also, Iowa has a true home-court advantage, with the Hawkeyes being 11-1 straight-up and 8-4 against the spread when playing at home this season.

One thing to really keep an eye on in this game is the fact that the Hawkeyes could look to play Zach Edey off the floor in this one. The last time these teams played, the 7-foot-4 big man had just six points and seven rebounds in 17 minutes. Fouls undoubtedly played a role in his minutes being down, but the Hawkeyes having so many players that can shoot the basketball is also important.

Keegan Murray actually didn’t even play in that last game between these two — a seven-point win for the Boilermakers at home — and he’s a forward that has the ability to play some small-ball five at the college level and really light it up. Murray is expected to be a Top-10 pick in the 2022 NBA Draft and his length and all-around ability will make him a tough matchup for Purdue’s big men. The Boilermakers could look to play Trevion Williams some bigger minutes at center, but he is yet another player that doesn’t move entirely well. If Iowa is hitting shots from deep — which they should at home — then Matt Painter is going to have some tough decisions to make.

Also, while Jaden Ivey is a borderline Top-5 draft prospect, the Hawkeyes have an experienced group of guards, led by Jordan Bohannon. The senior is an absolute sniper from deep and has plenty of experience playing in massive games like this one. He should show up in a big way on this stage, and his presence is one of the reasons to go with Iowa to pull off the upset.

Most of the bets on this game are coming in on the Over, but the total hasn’t moved up at all. Considering this is also a meeting between two of the Top-10 offenses in all of college basketball, it certainly seems like the oddsmakers are begging bettors to take the Over. It’s normally smart to zig when everybody else zags, so it’s better to simply roll with the Under and try to figure out why that’s the better side.

One thing to make note of when looking at this game is that the Under has actually hit in each of the last two games these teams have played. On top of that, five of the last six games played between these teams would have gone Under the number set on this contest.

The Under is also 8-1 when Purdue is playing as a road favorite (or pick’em) over the last three seasons, and the average total points scored in those games is 126.9 points per game. These big college basketball games normally tend to be lower-scoring than people expect, as players commit on the defensive end in the biggest of games.

Iowa has actually already started to slow things down a bit and focus more on defense, with the team coming off back-to-back Unders entering this one. Purdue is also coming off two Unders in a row.

Over the last three seasons, Iowa is 30-13 against the spread when playing at home. This is just a very hard place to play for opposing teams, and Purdue is 2-7 ATS over the last three seasons when playing as a road favorite. The Boilermakers are also 0-3 ATS as a road favorite this year. This just isn’t a team that is playing up to expectations on the road, and the Hawkeyes aren’t going to make things easy on them here.

Overall, it wouldn’t be that surprising if Fran McCaffery’s team pulled out the outright win here. This is a game that means a lot to Iowa, as the team is not currently in the Top 25 and that can change with a win in this spot. That’s important as we approach February.

It’s also important to note that Purdue’s point guard play has been underwhelming this season. You need a good point guard to win on the road in the Big Ten, giving you another reason to back the Hawkeyes. 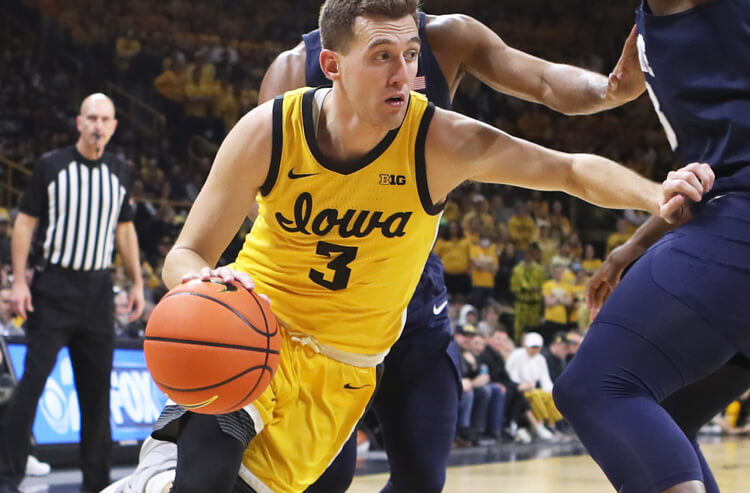 Purdue vs Iowa Picks and Predictions: Hawkeyes Hold Down Homecourt
Provided by