West Virginia may be losers of three straight but will be slim 1.5-point home favorites when they host the horribly turnover-prone Sooners, a team they're built to take advantage of. Read more in our Oklahoma vs. West Virginia betting preview below.

Oklahoma and West Virginia, both in the midst of losing streaks, are going head-to-head Wednesday night at the WVU Coliseum.

Prior to tonight, both teams have gone through a gauntlet of Big 12 opponents. OU's last four games have come against No. 21 Texas, TCU, No. 7 Kansas, and No. 5 Baylor while WVU is coming off games against Kansas, Baylor, and No. 18 Texas Tech. Far from a forgivable schedule.

Tonight, both teams have a chance to get back on track. Find out who has the edge in our college basketball betting picks and predictions for Oklahoma vs. West Virginia.

West Virginia hit the board as a slim 2-point favorite at home against the visiting Sooners and has hung around that number with -1.5s available at some shops. The total opened at 131 but has dropped down to 130 or 129.5. depending on the book.

Following an impressive win over Iowa State on January 8, the now 12-7 Oklahoma Sooners have lost four straight, three of which came against the cream of the Big 12 crop: Baylor, Kansas, and Texas.

While their 23rd-ranked defense has mostly held up over that stretch, allowing only 65 points to Baylor and 67 to Kansas, the offense has been limited to under 57 points per game.

On the season, the Sooners rank a formidable 65th in adjusted offensive efficiency and rank 34th overall when you account for their Top-25 defense mentioned above.

The 13-5 Mountaineers are also strong defensively, ranking 27th, but rank just inside the Top 100 offensively and really struggle shooting the ball — ranking outside the Top 200 in points per game, effective field goal percentage, free throw percentage, and 3-point percentage.

With that said, there may be an area that could give West Virginia a huge edge in this game — turnovers. Oklahoma averages 15.1 turnovers per game (329th in the nation) and has a 19.9% turnovers per play mark which ranks 346th of 358 eligible teams.

Look no further than OU's 14-point loss to Baylor on Saturday. They actually competed really well and shot better from the field overall than the Bears (45%), but the Sooners coughed the ball up a whopping 25 times, leading to 35 additional Baylor points.

This could be a huge problem for the visiting Sooners again tonight. Not only are the Mountaineers a Top-30 defense overall, but they rank 18th in the country in forcing turnovers (16.4 per game).

On top of that, playing back at home will give them a huge advantage. They're 10-1 SU at home this season and are welcoming a Sooners team that only has one true road victory this season (UCF).

I'm leaning on the Mountaineers to play well defensively, win the turnover battle, and do just enough offensively otherwise to secure the win at home.

As mentioned above, both of these teams rank inside the Top 30 in adjusted defensive efficiency and are both struggling on the other side of the ball as well.

During OU's four-game losing streak, it has eclipsed the 60-point mark just once, with the Under going 4-0 in those games, staying clear of the total by an average of 15 points. Of those four games, three would have stayed Under tonight's low total of 130, with the fourth game only getting to 131.

While Oklahoma is one of the most efficient 2-point shooting teams in the country (fourth in the nation), its shot totals can often be limited due to its high-turnover totals.

Both teams should be relying on their defenses tonight, and I expect them to keep each other in the low 60s as a result, ultimately staying just Under the total.

West Virginia -1.5 will be your best option tonight. It's going to be much tougher for the Sooners to end their losing streak in a tough road environment than it will be for the Mountaineers to do so at home.

West Virginia's only home loss came in a well-contested battle against Baylor, one of the best teams in the nation. Otherwise, they're undefeated — and I don't expect that to change tonight.

Back the Mountaineers to prevail in a near must-win game on the backs of their defense and energetic home crowd. 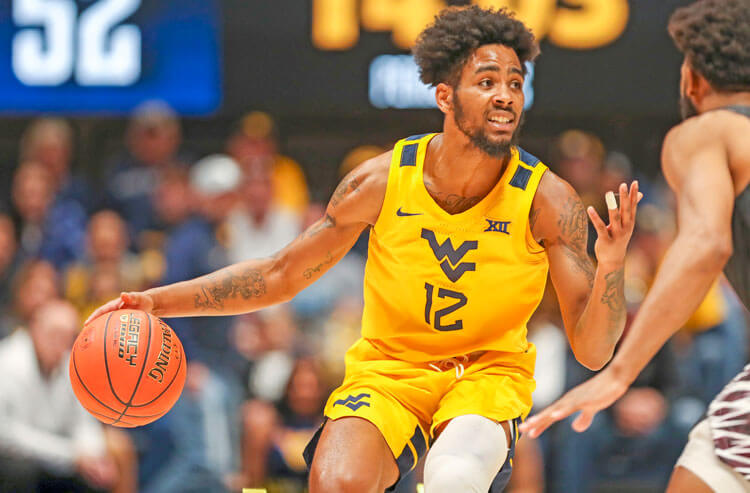 Oklahoma vs West Virginia Picks and Predictions: Mountaineers Edge Out Sooners in Much-Needed Win
Provided by