The Gators are without their best player, leaving a gaping hole in the frontcourt. The Vols are just the type of team to take advantage — find out why we're backing them to take care of business at home with our Florida vs. Tennessee picks.

After so many upsets last night, the Florida Gators will look to add an upset of their own Wednesday, on the road, against the Tennessee Volunteers.

Florida has won three of its last four games but took a brutal 70-54 loss to Ole Miss last time out. Meanwhile, Tennessee is on a small two-game winning streak after defeating LSU, 64-50.

Can Florida find a way to upset Tennessee on the road as a heavy underdog? Here are our college basketball picks and predictions for Florida vs. Tennessee on January 26.

Tennessee opened as an 8.5-point favorite at home and has now jumped up to a -10 favorite at some outlets. Meanwhile, the total hasn’t moved much since opening at 133.

Florida: Colin Castleton F (Out).
Tennessee: No injuries to report.

Volunteers are 6-1 ATS in their last seven games as a favorite. Find more NCAA betting trends for Florida vs. Tennessee.

Florida vs Tennessee picks and predictions

The Florida Gators are currently without big man Colin Castleton, who averaged 15.4 points paper game along with 9.1 rebounds per game. Castleton has a shoulder injury that is more significant than previously expected.

While he misses time, the Gators are going to struggle a bit on both sides of the ball. At times, the Gators relied so heavily on Castleton’s play, and also his energy on the court. It’s going to sting.

On offense, Florida is shooting 29.7% from deep and 53.7% from inside the arc. That was especially thanks to Castleton, who had been shooting 53.6% from the field. So that number will likely trickle down without him around.

Florida has struggled with turnovers this season and turns the ball over nearly once every five possessions. The Gators should have success on the offensive glass a little bit, but again, without Castleton, those numbers will change slightly.

On the other hand, Florida hasn’t been cleaning up the glass on the defensive end. The Gators are allowing opponents to earn 30.6% offensive rebounds. Still, the Gators have held opponents to 29.6% from three and 49.4% from inside the arc.

The Volunteers won’t get to the line at a high rate, but they absolutely will earn second chances and limit turnovers against a very good Florida defense. If the Volunteers can win the rebounding battle while limiting turnovers, Tennessee should be able to win against the spread against Florida in tonight’s SEC battle.

Despite both defenses being in the Top 50 of KenPom’s defensive efficiency metric, I still like the over in this one. Some of those defensive turnovers will turn into transition points.

While so many teams are taking a lot of time off the clock against Florida’s defense, the Volunteers are using just 16.9 seconds per possession this season and will likely shoot the ball sooner than other teams that have played against Florida.

Meanwhile, Florida is using 16.7 seconds per 100 possessions and should be able to extend this game a little by getting to the foul line at a high rate.

I’m sticking with Tennessee -10, at home. It’s always difficult to win road games in conference play and now Florida will be without its best player in a very tough road environment.

Tennessee is very capable of earning a ton of offensive rebounds and should be able to win the turnover battle by being a bit more careful on the offensive end.

After a massive 14-point home win against LSU, Tennessee looks like the real deal, especially at home. 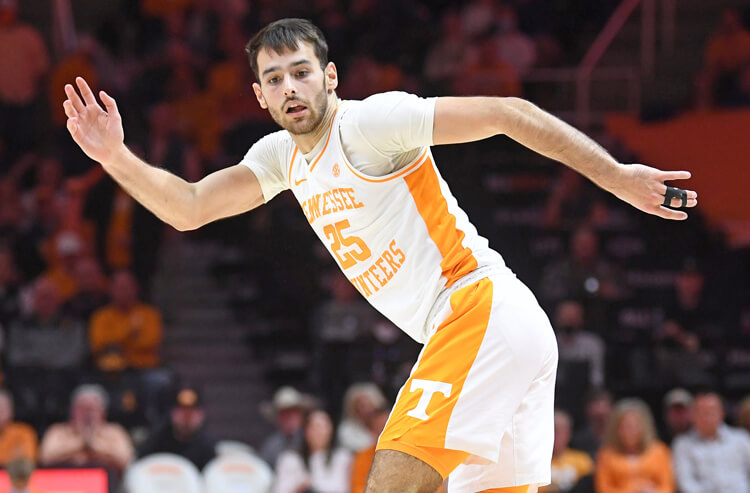