Marquee programs collide when Baylor and MSU face off in the Battle 4 Atlantis Final... at 11 a.m. ET! Both defenses look to be elite, but our college basketball picks are siding with the team that's better both shooting and grabbing boards — the Bears.

The Baylor Bears will take on the Michigan State Spartans in the finals of the Battle 4 Atlantis — and hopefully, there's no turkey hangover for both clubs as tip-off is bright and early at 11 a.m. ET!

Baylor has started this year looking just as great as last season. Despite losing four key players, the Bears are 6-0 to start the year and topped Arizona State and VCU to get to this game. Of course, Michigan State will be Baylor’s toughest challenge up to this point, as Baylor is just a 5.5-point college basketball betting favorite after being double-digit chalk in its last two games.

The Spartans took a loss to Kansas to start the season but have dominated ever since with five straight wins. Michigan State also had a harder schedule to get to the finals, having to play Loyola-Chicago and UConn — prevailing through those two games has proven just how good Michigan State could be this season.

Here are our free college basketball picks and predictions for Baylor vs. Michigan on Friday. November 26.

Baylor opened as a 5.5-point favorite and has stayed at that as of the time of writing. The total, however, opened at 139.5 and has dropped to 138.5 at some outlets. Use the live odds widget above to track any future line movements right up until tip-off and be sure to check out the full college basketball odds before placing your bets.

The Spartans are 2-8-1 ATS in their last 11 neutral site games. Find more NCAA betting trends for Michigan State vs. Baylor.

The Baylor Bears are ranked in the Top 6 in both offensive and defensive adjusted efficiency (per KenPom) to start the season. The Bears have also dominated on the glass, grabbing 39.7 percent of offensive rebounds and 76.6 percent of available defensive boards.

Baylor isn’t just great on the boards, however: The Bears are forcing turnovers on 28.5 percent of all possessions (seventh in the nation) while also holding opponents to just 41.4-percent shooting from inside the arc this season.

They don’t get to the line very often but they’re only shooting 66.7 percent from the foul line, to begin with. Baylor wins games by taking good shots, taking more shots, and getting second chances.

Michigan State will be the toughest defense it’s faced yet this season. The Spartans have held teams to an effective field goal percentage of 40.6 percent and have held opponents to 28.9 percent from three and 39.2 percent from inside the arc.

While the Bears may not shoot their best, there’s a good chance that Baylor still controls the glass and forces turnovers on the defensive end. That’ll be enough to beat a Michigan State team that is only shooting 32.7 percent from deep this season.

Both of these two offenses move at a fast pace... but we’re talking about two of the best defenses in all of college basketball.

Even if Baylor starts to get second-chance points and force turnovers, you still need Michigan State to score on the offensive end to get Over the total — and the Spartans won’t have much success against Baylor offensively if they continuously face pressure and turn the ball over.

Despite not logging an ATS win in the first two games of this mini-tournament (pushing -12 vs. ASU and losing -13.5 vs. VCU) we like Baylor to win by double-digits against Michigan State.

Time and time again, Michigan State improves their game by February and March — the Spartans aren’t at their peak at this time of year. While they’ve won some close games, it’s always hard to trust MSU this early in the season.

We’ll stick with Baylor, knowing they’ll win the rebounding battle, should force more turnovers, and are the better shooting offense. 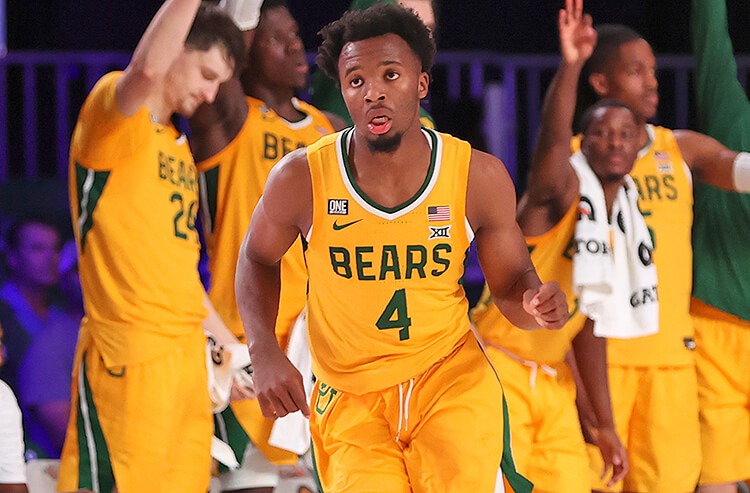 Cincinnati vs Wichita State Picks and Predictions: Back Home Shockers to Get Right
Jason Radowitz | Jan 16, 2022

Michigan vs Illinois Picks and Predictions: Wolverines Keep This One Close
Jason Radowitz | Jan 14, 2022
About Us
Contact Us
Careers
Our Team
Brand
Testimonials