Kentucky vs Auburn Picks and Predictions: Tigers a Tough Matchup for Wildcats

The best game on Saturday's college basketball betting slate will be in Auburn, where the Tigers host the Kentucky Wildcats. In must-watch hoops, Auburn should have the edge on both ends as our picks and predictions highlight.

The top two teams in the SEC will face off when the No. 12 Kentucky Wildcats (15-3, 5-1) pay a visit to No. 2 Auburn Tigers (17-1, 6-0) in Saturday's premier college basketball betting matchup. The Wildcats have won eight of their last nine, which includes their first wins on the road. Auburn, undefeated at home and winners of fifteen straight, presents Kentucky with the toughest road challenge on its schedule this year.

Continue reading for our free college basketball picks and predictions for Kentucky vs. Auburn on Saturday, January 22nd for more.

Auburn opened as 2-point favorites on Friday afternoon, while the total opened at 149.

Kentucky has played Under the total in all four of its true road games. Find more NCAA betting trends for Kentucky vs. Auburn.

Kentucky vs Auburn picks and predictions

Oscar Tshiebwe is a star and he shines brighter than most. The 6-foot-9, 260-pound bully not only leads the Wildcats in scoring with 16.1 points per game, he leads the entire nation in rebounding with 14.8 rebounds per game. In the face of questions regarding if this Kentucky team could win a true road game (it had failed to do so through December), Tshiebwe put up a career-high 30 points in Vanderbilt's building in a convincing win.

But Kentucky isn't the fourth-ranked KenPom offense in the nation off the back of one player. TyTy Washington is a shot creator for himself (14.2 PPG) and for others (4.6 APG), like he is for sniper Kellan Grady (11.4 PPG, 43.4% from three). TyTy is particularly valuable as he keeps all levels of the defense honest, threatening the rim with athletic finishes and being a capable shooter on long twos (49.1%) and from deep (40.7%).

Auburn's head honcho is 6-foot-10, 220-pound forward and true freshman Jabari Smith, who averages 15.8 points and 6.3 rebounds per game. Smith possessing a 46%/43%/79% shooting split for a man of his size is truly awe-inspiring, although he could be better at the rim (66%) if one was to poke holes in his game.

He is supported by a trio of sophomores who all transferred to Auburn this season. Point guard Wendell Green (13.1 PPG, 5.6 APG) has filled in as the pilot of the offense after transferring from Eastern Kentucky. At 7-foot-1 and 245 pounds, Walker Kessler (10.3 PPG, 7.4 RPG) provides an absurd interior presence that includes 4.3 blocks per game, the second-highest mark in the nation. And lastly, K.D. Johnson provides spacing with his 3-point shooting (36% career shooter).

Despite the impressive cast on paper, Auburn is simply not on Kentucky's level offensively. It fails to rank inside the Top 100 in field goal percentage at any of the three levels on the court. Kentucky, on the other hand, possesses a nation-leading 74.9% field goal percentage at the rim and is proficient enough on 2-point jumpers (100th) and 3-pointers (100th) to punish teams hedging towards the paint too much.

But the beauty of basketball is that it is played two ways, and that's where the matchup edges will exist. Auburn's field goal percentage at the rim (128th) isn't anything crazy on paper, but Kentucky is particularly soft there on defense (285th). It would be wise of Bruce Pearl to lean on the aforementioned Kessler (78.9% at the rim) and even backup forward Jaylin Williams (77.5%).

On the other side, Auburn should be able to keep Thsiebwe and company humble down low, as the Tigers possess the highest block percentage at the rim in the nation. They're also more than equipped to defend jumpers (53rd from two and 95th from three) to keep the rest of Kentucky's versatile offense at bay.

Throw in that they get to do this all from the comfort of their home court.

When it comes to the total, the table has already been set. Auburn's defense should have the wrinkles to keep Kentucky's hyper-efficient offense somewhat at bay, while Auburn's offense isn't exactly the type to light the world on fire.

Although Kentucky has newfound success on the road, the total has been a different story. In their four true road games, the Wildcats have played to the Under every time. Conversely, the Tigers have played 2-4 to the Under in their last six home games.

Looking for other channels where this game could find scoring, Auburn does commit 18.4 fouls per game which ranks 84th in the nation. But Kentucky more than makes up for it with their level of discipline, ranking 349th in personal fouls committed (13.6 per game) and sending opponents to the line just 13.1 times per game (26th).

Oscar Tshiebwe is an undeniable star and every time he steps on the court, there is a great chance that he is the most talented player on it. But Saturday's challenge features a matchup that could ultimately dim his shine and minimize his impact on the outcome.

That's not to suggest that the other Wildcats can't pick up the slack if need be. In fact, Tshiebwe has "only" led the team in scoring in seven of their 18 games and just twice in their last nine. On top of TyTy Washington and Kellan Grady, the Wildcats also have Sahvir Wheeler who has no issue running an offense (10.4 PPG, 7.1 APG).

But ultimately Auburn has the defensive tools (Walker Kessler), scoring (Jabari Smith and Wendell Green), and coaching acumen (Bruce Pearl) to be the ones that draw blood with their claws on Saturday. Plus, a team doesn't come to accumulate the fourth-best spread cover percentage in the nation by being overvalued in the market. 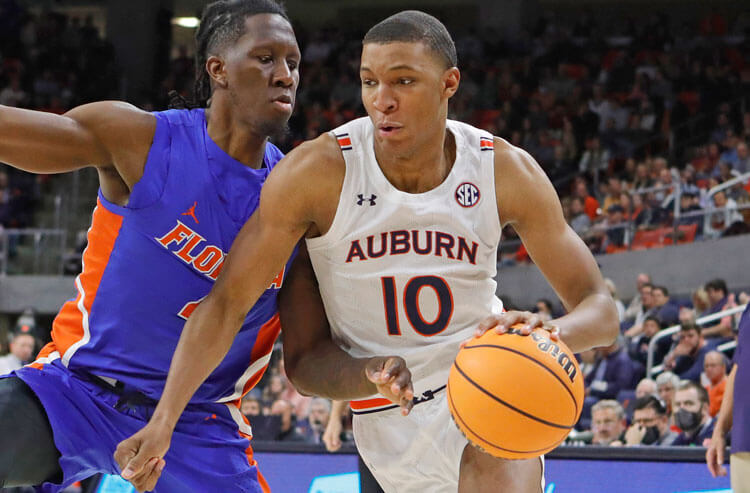 Kentucky vs Auburn Picks and Predictions: Tigers a Tough Matchup for Wildcats
Provided by