The college basketball betting board for Tuesday is headlined by a Big 12 battle between the Kansas Jayhawks and Texas Longhorns.

While these are two of the top teams in the conference, they appear to be moving in opposite directions—but oddsmakers are expecting the Longhorns to bounce back from a home loss on Saturday, installing them as 3-point favorites tonight.

Here are our best free Kansas vs. Texas picks and predictions for NCAA hoops action on Tuesday, February 23, with tipoff at 9 p.m. ET.

The Longhorns are 1-7 ATS in their last eight games overall as well as their previous eight contests as a home favorite. Find more NCAA betting trends for Kansas vs. Texas.

Texas opened as a 2.5-point favorite at PointsBet USA on Monday afternoon and dipped to -1.5 a short time later, then the Longhorns stretched to -3 a couple of times today, and the number sits at -3 as of 8 p.m. ET. However, Kansas is taking the bulk of the action. "Seventy percent of bets and 71 percent of handle on the Jayhawks," PointsBet's Patrick Eichner said. The total opened at 140, briefly dropped as low as 137.5 this morning, spent most of the day at 138 and ticked to 138.5 this evening. "Eighty percent of tickets and 85 percent of handle backing the Over," Eichner said.

After looking like the best team in the conference earlier in the season, Shaka Smart's Longhorns are just 3-5 SU and 1-7 ATS over their last eight games and are coming off a home loss to West Virginia.

The Jayhawks were the opposite, beginning the new year by going 4-6 SU and 3-7 ATS, a stretch that began with a brutal 25-point loss to Texas in Lawrence. However, the Jayhawks appear to have turned things around and are fresh off a 67-61 win against Texas Tech, which makes them 5-0 SU and ATS over their previous five contests.

While it's difficult to have watched that previous meeting and come away thinking that Kansas has a chance on the road tonight, the Jayhawks are simply too talented and well-coached to get embarrassed like that again. They also have the edge in a few key categories which should allow them to keep things close—if not win outright.

Kansas plays suffocating defense, ranking 12th in the country in adjusted defensive efficiency, according to KenPom. The Jayhawks have been particularly strong in conference play, holding Big 12 foes to 64.4 ppg on 40.5 percent shooting.

The Jayhawks also have a better turnover differential than the Longhorns, commit far fewer fouls on the defensive end of the floor and hit their free throws at a higher rate. Texas ranks near the bottom of the country with 20.9 personal fouls per game and shoots just 68.4 percent from the charity stripe, and that number has dropped to 61.2 percent over the last five games.

If the Longhorns keep sending the Jayhawks to the line, while failing to connect on their own free throws, that will make it difficult for them to cover this spread. Back Kansas.

Unlike previous versions of the Jayhawks, this Kansas squad lacks a go-to scorer. However, they get offensive contributions from every starter as all five players average double-digits, led by Ochai Agbaji and his 13.7 points per game.

Even during their recent slump, the Longhorns have played well offensively, averaging 75.8 ppg and connecting on over 50 percent of their shots against strong defensive teams like West Virginia and Baylor. It's been on the defensive end of the court where Texas has taken a step back, surrendering at least 75 points in five of its last six contests.

When these teams met up on January 2, they combined for 143 points and while Texas did most of the work in that contest, I simply don't see Kansas missing as many shots today.

The Jayhawks aren't great at shooting from 3-point range, converting on 34.2 percent of all attempts, but they are much better than their 3-for-23 performance in that previous meeting.

Expect them to be able to connect from deep against a Texas defense that has allowed opponents to shoot 42.4 percent from beyond the arc over the last five games. Take the Over. 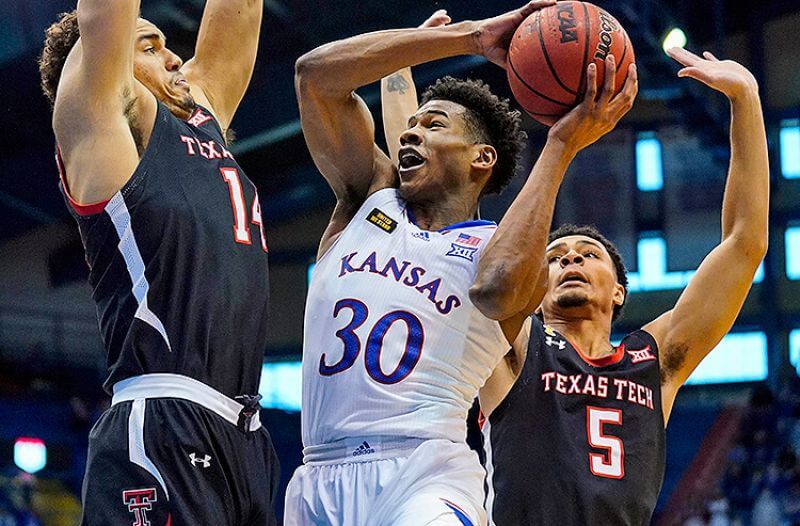