Indiana vs Wisconsin Picks and Predictions: Back Home Badgers to Get First Conference Win

Indiana has rolled to a 7-1 start including a win in their first conference game last weekend, but now they face the Wisconsin Badgers, their biggest test yet, as 4.5-point road dogs. See how it plays out in our Indiana vs. Wisconsin picks.

We're back with more Big Ten action between the Indiana Hoosiers and Wisconsin Badgers.

Indiana has started the season 7-1, with its only loss coming in 112-110 OT thriller fashion against Syracuse. The Hoosiers started Big Ten conference play on the right foot, moving to 1-0 with a 68-55 win against Nebraska last Saturday. The Badgers are also 7-1, with wins against No. 12 Houston and Marquette, with their only loss coming to a now 10-1 Providence squad.

Can Wisconsin get off to a good start in conference play and fend off the Hoosiers at home? Find out in our college basketball betting picks and predictions for Indiana vs. Wisconsin.

Wisconsin opened as 3.5-point favorites against Indiana but have been bet up to -4.5. The Over/Under came to the board at 132.5 but has since dropped down to 130.5 with heavy action on the Under.

Indiana vs Wisconsin picks and predictions

Though it may appear that Indiana has a huge offensive edge with its Top-30 scoring offense, a deeper look tells you it's much closer. Indiana has only played one defense ranked inside the Top 140 in defensive efficiency. In addition, the 80.4 scoring average is a little fluffed due to the 110 the Hoosiers scored in double OT against Syracuse. When you look at offensive efficiency, these teams couldn't be more evenly-matched, ranked 98th and 99th in the country, and when you account for opponents, Wisconsin actually ranks higher (50th compared to Indiana's 65th, per KenPom).

The Badgers are led by sophomore guard Johnny Davis, who's averaging 20/6/2 on 46/82/41 shooting splits. His two best performances have come in the Badgers' two biggest wins - 30 points on 10/18 shooting against No. 12 Houston and 25 points on 9/14 shooting in an 89-76 win over Marquette. Expect the Badgers to lean on him for buckets in what could be a really low-scoring game.

The difference-maker will be the Badgers' defense that ranks 15th in the country in adjusted defensive efficiency and 19th in points allowed per game. Indiana also has a very strong defense, ranking 16th and 73rd in those categories, but the eye test tells you Wisconsin is the more dominant, physical defensive unit.

As long as Wisconsin doesn't let Trayce Jackson-Davis run loose like he's done twice this year, with 43- and 31-point performances already this season, the Badgers should be able to contain the Hoosiers' offense and dictate the pace of the game.

This young Hoosiers team lost the only other road contest they've played this season, and they enter a tough venue tonight against a team eager to get its first conference win. Back the Badgers to control the game on defense and piece together enough offense to win and cover for the sixth game in a row.

What makes the Under so appealing in this game, even at a number as low as 130.5, is the expected pace of play between these two teams. Wisconsin is one of the slowest-tempo teams in the nation, ranking 302nd in adjusted tempo.

Despite its offensive output, Indiana is only 2-6 O/U, and the two games that went Over were in games the Hoosiers scored 90 and 110 points, respectively. In their conference opener against Nebraska, they scored 68 points, and the game finished at 123, 20 points Under the total of 143. Wisconsin's defense is a big step up from Nebraska and the Hoosiers could struggle to score for stretches of this game, especially on the road.

On the other side, Wisconsin shoots poorly from beyond the arc, rarely turns the ball over, and struggles to grab offensive boards - all indicators of a slowed-down, low-scoring affair.

As mentioned above, both teams sit in the Top 20 of adjusted defensive efficiency, and I expect that to reflect in the final score tonight. Back this game to stay Under the total.

I'm sticking with the Under as my best bet tonight. Wisconsin struggles from the perimeter and can be offensively challenged at times, and I expect Indiana to struggle offensively against a defense in a different tier relative to the weaker ones they've faced so far this season.

I expect this game to be ugly for stretches and stay Under when all is said and done. 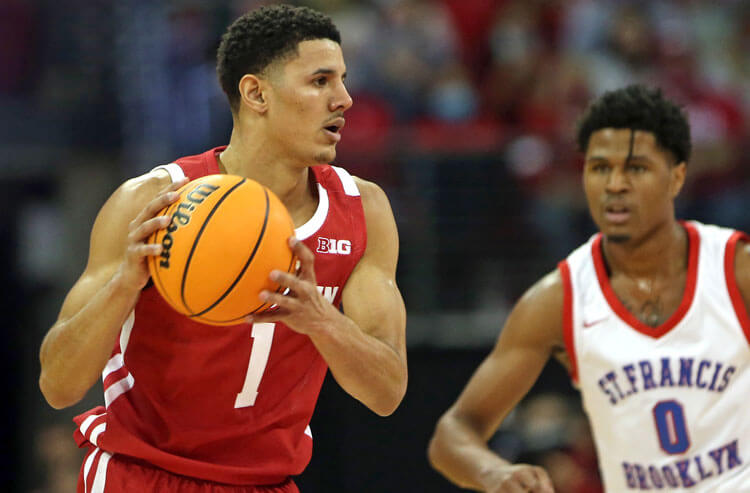 Indiana vs Wisconsin Picks and Predictions: Back Home Badgers to Get First Conference Win
Provided by

Texas A&M vs LSU Picks and Predictions: Tigers Bounce Back, Roll vs. Aggies
Shawn Wronka | Jan 26, 2022
About Us
Contact Us
Careers
Our Team
Brand
Testimonials