One of the best games in the early college basketball betting season comes in Las Vegas tonight, as the No. 1 ranked Gonzaga Bulldogs face the No. 2 UCLA Bruins. The Final Four rematch comes at a great time for the Bruins, as we highlight in our picks.

The college basketball betting board on Tuesday night is headlined by the biggest game of the early season, as the No. 1 ranked Gonzaga Bulldogs face off against the No. 2 UCLA Bruins.

This should be a fantastic rematch between two programs that treated us to a Final Four classic in the spring. The Zags are 7-point college basketball betting favorites for this showdown, which will take place at T-Mobile Arena in Las Vegas for the Good Sam Empire Classic.

Here are our best free Gonzaga vs. UCLA picks and predictions for Tuesday, November 23, with tipoff at 10 p.m. ET.

This line opened with Gonzaga installed as a 6-point favorite with the Over/Under at 156.5. Early money came in on the Zags and the Under moving the line to Gonzaga -7 and the total to 155. Use the live odds widget above to track any future line movements right up until tip-off and be sure to check out the full college basketball odds before placing your bets.

The Bruins are 6-0 ATS in their last six games as an underdog. Find more NCAA betting trends for Gonzaga vs. UCLA.

Gonzaga vs UCLA picks and predictions

When these squads clashed in the Final Four in April, the Bruins were on a Cinderella run as a No. 11 seed and faced the then-unbeaten Zags as 14-point underdogs. They proved they were no fluke and battled Gonzaga into overtime before eventually falling on a Jalen Suggs buzzer-beater from almost halfcourt.

This time the Bruins will not be sneaking up on anybody, as they returned their entire starting lineup and are one of the most experienced teams in the country. Although one of those starters, forward Cody Riley, is currently out with an MCL sprain, UCLA might be even better defensively in the paint with Myles Johnson, who finished second in the Big Ten in blocks per game (2.4) with Rutgers last season.

The Bruins have started the year with a 5-0 record (3-2 ATS) and are fresh off a 75-62 win over Bellarmine last night. Their most impressive victory came at home against Villanova on November 12, when they dispatched a No. 4 ranked Wildcats team in overtime.

The Bulldogs are also a perfect 5-0 to start the year (3-2 ATS) and demolished Central Michigan by 53 points last night. They've been installed as more than 30 point faves on four occasions this season and their closest game came against No. 5 Texas on November 13. They had a whopping 22-point lead in the second half of that game against the Longhorns before holding on for a 86-74 victory.

Gonzaga made it to the National Championship game before falling to Baylor and while they lost some key players in the offseason, they also returned some big names including Drew Timme, Julian Strawther, and Andrew Nembhard. They also added one of the nation's best recruiting classes led by the consensus No. 1 recruit, Chet Holmgren.

Both of these teams have been absolutely unstoppable on offense while also looking very strong on the defensive end of the court. That said, Gonzaga had a better backcourt last season and both Suggs and Joel Ayayi had to play out of their skin to hang with UCLA's guards and wings. Johnny Juzang, Jaime Jaquez Jr, Julius Bernard, and Tyger Campbell give the Bruins an advantage on the perimeter this time around, and while Holmgren has plenty of promise, he disappeared against Texas and might not have the physicality to make a big impact against elite programs early in the season.

This should be a fantastic game and it should be closer than this line suggests. Back the Bruins with the points.

This total opened at a massive 156.5 but there's reason to go against the line movement. After all, these squads combined for 162 points in regulation during the high-pressure environment of March Madness, and might play even more fast and loose early in the season.

The Bulldogs are No. 1 in the country in adjusted offensive efficiency according to KenPom, while also playing at one of the fastest paces in the country. Timme leads the team with 18.8 points per game on 67.3 percent shooting, and the Zags rank second in the nation with 93.2 ppg while ranking first with a 55.5 field goal percentage.

The Bruins also have plenty of firepower with three players averaging over 15 ppg, led by Juzang and his 19.8 ppg. Campbell pulls the strings of this offense with 10.8 ppg and 4.8 apg, and the Bruins rank seventh in the nation in adjusted offensive efficiency while shooting lights out from beyond the arc (connecting on 39.7 percent of their three-pointers).

With the Over cashing in five of the Bruins' last six contests overall and the Zags going 14-6 to the Over in their previous 20 neutral site games, that's the direction we're leaning towards tonight.

Frankly, this line seems a little off. Yes, the Zags are the No. 1 team in the country but the Bruins are No. 2 for good reason and have the more experienced rotation. They also proved they could hang with the Zags in April and appear even better this time around.

Being able to take them with seven points on a neutral court, before Gonzaga's hyped freshman class finds its footing, seems like great value. 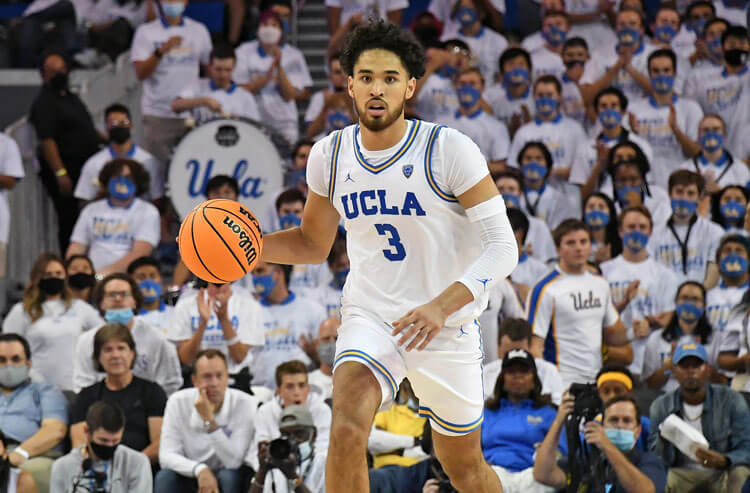 Gonzaga vs UCLA Picks and Predictions: Final Four Rematch in Vegas
Provided by