Warriors vs Mavericks Picks and Predictions: Golden State is Officially Back on Track

A season-opening slump appears to be behind the Golden State Warriors after winning five of six. Meanwhile, it's been tough sledding for the Mavericks who haven't given their MVP much support. We break down the matchup and more in our NBA picks below.

There are just three games on the NBA betting board this Tuesday but that includes a marquee matchup between the Golden State Warriors and Dallas Mavericks.

These teams faced off in the Western Conference Finals during the spring and are led by two of the best players in the world in Stephen Curry and Luka Doncic. Both sides have had their share of early-season hiccups but the Warriors have climbed above .500 and are installed as slim 1.5-point road faves tonight.

Check out my best NBA picks and predictions for Warriors vs. Mavericks below.

Warriors vs Mavericks picks and predictions

The Mavericks have lost four games in a row and are the worst ATS team in the league having covered just once in their last 15 games. They'll be happy to be back home for this one but they'll need more offensive consistency from their supporting cast.

Doncic leads the team with 33.1 points, 8.4 assists, and 8.7 rebounds per game but the team has been far too reliant on him to ignite the offense.

The Mavericks' record this season when Luka Doncic scores...

Curry is also once again playing at an MVP level with 31.4 ppg on 52/44/91 shooting but Andrew Wiggins, Klay Thompson, and Jordan Poole are all averaging over 16 ppg as well. After some inconsistent performances at the start of the season, Thompson and Poole have been far more efficient over the last few games.

The Mavericks have dropped four in a row to drop below .500. In their most recent outing, they lost 124-115 to the Bucks on Sunday which dropped their away record to just 1-7.

They won't be able to keep pace with a red-hot Warriors team that is 3-0 SU and ATS in their last three games with an average scoring margin of +17 ppg over that span.

After winning the NBA title and keeping their team intact, the Warriors came into this season with the second-best NBA futures odds. However, they had an ugly start and ranked near the bottom of the league in defense despite impressing on that side of the floor last season.

They have since turned things around, going 5-1 SU (4-2 ATS) in their last six games and they're fresh off a 137-114 victory over the Timberwolves on Sunday. Their lone loss during that span came against the Pelicans, when they were missing Curry and three other starters.

The Dubs eliminated the Mavs in five games in the conference finals in May with all of their wins coming by at least nine points. Golden State's lineup has remained virtually unchanged while Dallas made one significant move: swapping out guard Jalen Brunson for big man Christian Wood.

Both of these teams often roll with small-ball lineups and even taller Dallas players like Wood, Maxi Kleber, and Davis Bertans tend to stretch the floor without providing much rebounding.

The O/U opened at 226.5 and has ticked up to 228 but it's tough to find an angle when handicapping the total because these teams sit at completely opposite ends of the spectrum.

Not coincidently those numbers are virtually flipped on the other end of the floor with Golden State third in scoring (117.8 ppg) and Dallas 27th (109.1 ppg).

Recent form is the primary reason why the total is as high as it is. The Warriors have dropped an incredible 129.3 ppg in their last four games with Curry while the Mavs have surrendered more than 120 points in two of their last three.

The Over is 13-5 in the Mavericks' last 18 games vs. a team with a winning record. Find more NBA betting trends for Warriors vs. Mavericks. 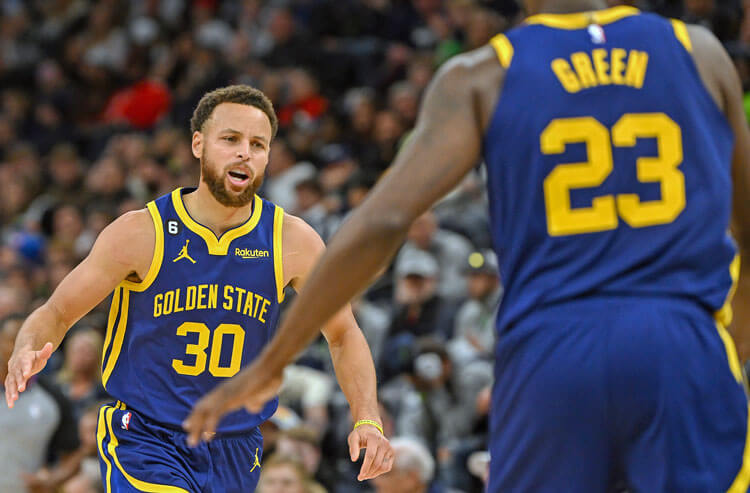 Warriors vs Mavericks Picks and Predictions: Golden State is Officially Back on Track
Provided by