While Indiana's going through the motions amid heavy trade rumors, Phoenix has the NBA's best record and is looking to go on another run. Find out why we're backing the more consistent team on the road with our Suns vs. Pacers picks.

The Phoenix Suns have won five of their last seven games and now get to face a struggling Indiana Pacers team. The Pacers just lost by 19 points at home to the Boston Celtics, so they’ll definitely be hoping to go out there and play a lot better this time around.

Will Indiana get back on track and find a way to upset Phoenix? Continue reading our Suns vs. Pacers NBA picks and predictions for January 14 to find out.

Depending on where you look, you’ll find the Suns as favorites of 5.5 or 6 points in this road game against the Pacers. Phoenix opened as a 5-point favorite and is taking most of the action here. The total, which opened at 220, is now sitting at either 220 or 220.5.

The Suns are 7-2 against the spread in their last nine games against teams with losing records. Find more NBA betting trends for Suns vs. Pacers.

Suns vs Pacers picks and predictions

The Suns aren’t playing quite as well as they were during their franchise record-breaking winning streak earlier in the year, but they have won four of their last five games and are 3-1-1 against the spread in those contests. Now, Phoenix gets to face an Indiana team that appears to have packed it in lately. The Pacers are 2-8 in their last 10 games and are coming off a 19-point loss to the Celtics in Indiana. This group occasionally shows up to play but the inconsistency makes it hard to trust them.

Phoenix should feel pretty good about the matchups in this one, as the Suns have Deandre Ayton to guard Domantas Sabonis. Sabonis is usually capable of physically dominating his opponents, but he’ll have to work for everything against Ayton tonight. As for Myles Turner, it helps the Suns that he isn’t much of an interior player. The Suns will likely throw Jae Crowder on him and live with him shooting over the smaller wing.

Offensively, this seems like a game that could really suit the Suns. Indiana does not defend the perimeter well, which is a bad sign when facing Devin Booker and Chris Paul. Both players should be in for big performances here, and it also wouldn’t be surprising if Mikal Bridges gets it going. He’ll be a bit more aggressive with Cam Johnson banged up.

The Under is 3-2 in Phoenix’s last five games and the team continues to play the type of D that has it sitting at second in the league in defensive rating this year. Now that the Suns are finally getting back to full strength, they should be even more consistent on that end of the floor. Overall, the Pacers are just in for a tough night on the offensive end and that’s a good start for Under bettors. However, it also helps that the Suns are struggling a bit on offense, making it unlikely they’ll run up the score here.

The Under is actually 15-5 in games Indiana has played as an underdog this season. It’s also 9-5 when the Phoenix is a road favorite this year.

Booker is due for some good shooting nights in the next couple of weeks, as he’s just been way off recently and is a far better shooter than his percentages suggest he is. He has, however, still been scoring, and he comes into this game having scored at least 24 points in seven of his last 11 games. That’s all he’d need to score tonight in order to this prop to win.

The Pacers are just 21st in the league in defensive rating this season and they’ve been even worse over the last few weeks. This is not a good defensive team, so Booker should be able to play well here. He’ll also need to be a little more aggressive than usual, as the Suns could need somebody to replace the production of Johnson — who is questionable.

Did you know that if you parlayed today’s NBA Suns vs. Pacers predictions and picks in a single-game parlay, you could win $59.58 on a $10 bet? 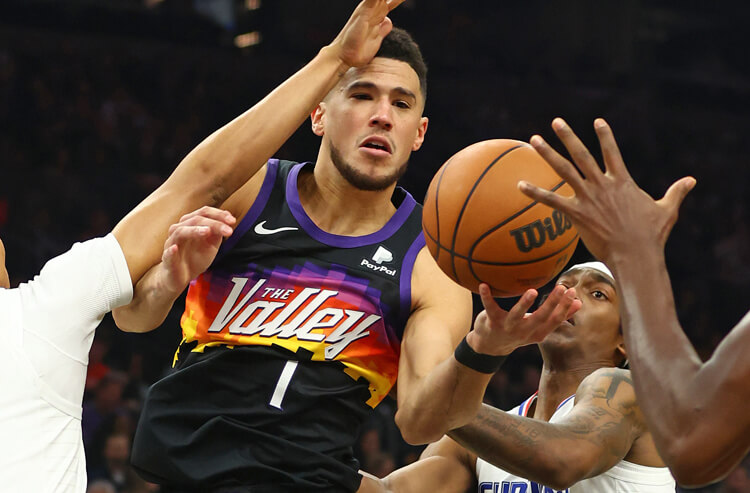