Warriors vs Bulls Picks and Predictions: Chi-Town Bounces Back

Golden State and Chicago are both coming off embarrassing blowouts to fellow NBA Finals contenders. Find out which one can get right for tonight's showdown with our Warriors vs. Bulls NBA betting picks.

The Golden State Warriors got blown out by the Milwaukee Bucks last night and things won’t get any easier in a Friday road game against the Chicago Bulls. The Warriors are already missing Draymond Green and won’t have Klay Thompson on the second night of a back-to-back, so this is going to be a tough one for them.

Will Golden State dig deep and come away with the win over Chicago? Keep reading our Warriors vs. Bulls NBA picks and predictions for January 14 to find out.

The Warriors opened as 4-point underdogs in this game against the Bulls, but you can now find them at -3.5. Meanwhile, the total opened at 223 in this one and is now anywhere between 222.5 and 223.5.

The Bulls are 10-4 against the spread in their last 14 games following a straight-up loss. Find more NBA betting trends for Warriors vs. Bulls.

Warriors vs Bulls picks and predictions

Both the Warriors and Bulls are coming off of blowout losses, with Golden State getting destroyed by Milwaukee and Chicago fresh off an embarrassing second-half effort against Brooklyn. The Warriors, however, are in worse shape entering this game, with Thompson and Green out. As we saw in Thursday night’s game against the Bucks, the Warriors just aren’t the same without Green’s ability to dominate on the defensive end. Golden State has the top defense in basketball this season, but it’s mediocre when Green is off the floor.

With the Warriors not playing their usual brand of elite defense, the Bulls should be able to get themselves going on the offensive end. DeMar DeRozan and Zach LaVine are likely in for some good performances here, while Nikola Vucevic should be able to play rather well in his matchup with Kevon Looney. If guys like Lonzo Ball and Coby White are knocking down open shots, this could turn into a blowout.

Ball will also be extremely important on the other end of the floor, where he’ll likely end up spending a decent amount of time on Steph Curry. As long as Ball is doing a decent job of contesting shots, this should end up being a win for the Bulls. Chicago is also 22-9 against the spread in its last 31 games as a favorite.

The Bulls have gone Over the total in three of their last four games and could be looking at another high-scoring affair when they host the Warriors tonight. Golden State is without its best defender in this one, which means the team is going to be struggling to get big stops in this game. The Warriors were completely diced up by the Bucks last game, and the Bulls are capable of regularly getting good shots against them as well.

The Over is 4-0 in Golden State’s last four games against teams with winning percentages above 60%. It’s also 6-2 in Chicago’s last eight games in which the team is coming off an ATS loss.

A lot of sites have Ball’s assist total at 5.5 for tonight, but you can get him at 4.5 if you look in the right spots. Ball has had had least five assists in each of his last six games and he should continue to put up decent numbers in that regard with Caruso out of the lineup. The Bulls give LaVine and DeRozan a lot of opportunities to run the offense, but Ball is the only true point guard on the team when Caruso is out.

In what should be a somewhat high-scoring game against the Warriors, backing Ball at this number seems like an easy call. Chicago will also try to get out and run against this Golden State team, and Ball is one of the best hit-ahead passers in the entire league.

Did you know that if you parlayed today’s NBA Warriors vs. Bulls predictions and picks in a single-game parlay, you could win $59.58 on a $10 bet? 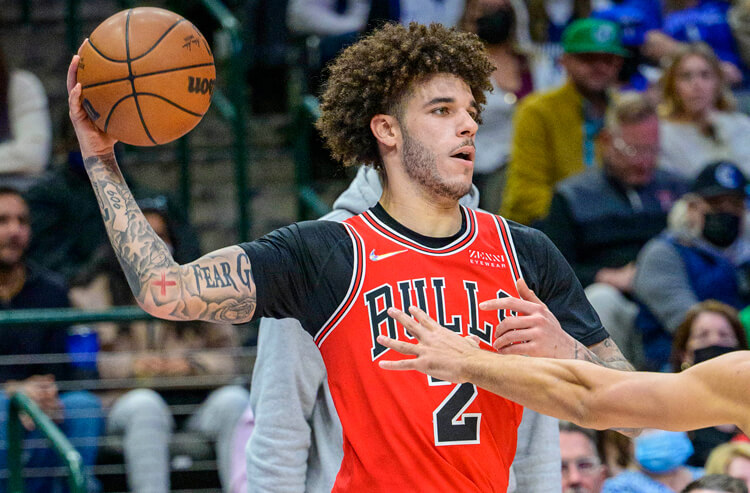 Warriors vs Bulls Picks and Predictions: Chi-Town Bounces Back
Provided by