The Pistons always play the Raptors tough and 7-3 in the last 10 meetings, but recent history only means so much with Toronto rolling into this meeting. Our NBA betting picks count on the Raps to win and cover in Detroit — read on below.

The Toronto Raptors saw their six-game winning streak come to an end in a hard-fought game against the Phoenix Suns, but now comes their most feared opponent – former coach Dwane Casey and the Detroit Pistons.

Despite the Pistons being, well, the Pistons, Casey has had the Raps’ number in recent years. Can Toronto overcome its former bench boss and cover the big road chalk in the process?

Find out in our free NBA betting picks and predictions for Raptors vs. Pistons on January 14.

The Raptors open this Eastern Conference matchup as 8-point road favorites and the early bettors were happy to jump all over them, moving the line all the way to -10. The total hit the board at 213.5 and has come down slightly to 212.5.

The Over is 6-0 in the Raptors' last six road games and 5-2 in the Pistons' last seven as home underdogs. Find more NBA betting trends for Raptors vs. Pistons.

Raptors vs Pistons picks and predictions

For whatever reason, Dwane Casey always has the Pistons ready to take on the Raptors. Despite being an underdog nine times in the last 10 meetings against the Raptors, the Pistons are actually 7-3 straight up in those games. That includes this season’s earlier meeting, in which the Pistons won 127-121 as 7.5-point underdogs.

Frankly, it doesn’t really make a ton of sense and the Raptors are 10-point favorites in this game for a reason.

The Raptors rank seventh in net rating in their seven games since Dec. 31, and despite losing their last game to the Suns, they put up an admirable fight and covered as 4.5-point underdogs.

On offense, the Raptors are being carried by Fred VanVleet and Pascal Siakam. VanVleet is making a strong push to be selected to his first All-Star game. The point guard is averaging 29.6 points on 45.1% from 3-point range while adding 7.3 assists and 4.6 rebounds over his last nine games.

Meanwhile, Siakam is playing arguably his best basketball since 2019. The forward is putting up 24.1 points per game to go along with 9.4 boards and 6.0 assists over his last nine games.

Now, VanVleet, Siakam, & Co. will face a Pistons team that struggles on defense, ranking 23rd in defensive rating, and have allowed 116 or more points in four of their last five games.

But it’s the offense that is the real problem. Detroit ranks dead last in the NBA in offensive rating, effective field goal percentage and is next to last in scoring.

Casey always has Detroit up for this game but the Raptors have a big edge in roster depth and could be getting Scottie Barnes back for this matchup. It’s a big number but we’d still lean towards the Raps.

When it comes to the total, we get a relatively low 212.5 thanks to the Pistons’ flaws on offense but that number may be low enough to still consider the Over.

As noted, the Raptors' offense is roaring right now. Toronto ranks second in offensive rating since Dec. 31 and is scoring 114.9 points per game and now faces a Detroit defense that has surrendered 119.8 points per game over its last five games.

While the Raptors’ defense has played better of late they still rank just 19th in defensive rating and are one of the worst teams in the NBA when it comes to defending the perimeter, ranking 26th in opponent 3-point shooting percentage. So, while the Pistons are not a great shooting team they might get some opportunities to get hot against the Raps.

Bet on the Raptors to do the heavy lifting here, while the Pistons contribute just enough to send this one Over the number.

Another place the Pistons really struggle is on the glass. Detroit ranks dead last in the NBA in rebounding while ranking 25th in opponent rebounds per game. That should create an opportunity for Siakam.

Siakam has been a force on the board for the Raptors, averaging 9.7 boards over his last 12 games, and has hauled down double-digit rebounds six times over that stretch. Additionally, he grabbed 12 boards in the last matchup against the Pistons.

So, getting plus money on the Over 8.5 boards in this matchup is too tempting to pass up.

Did you know that if you parlayed today’s NBA Raptors vs. Pistons predictions and picks in a single-game parlay, you could win $64.71 on a $10 bet? 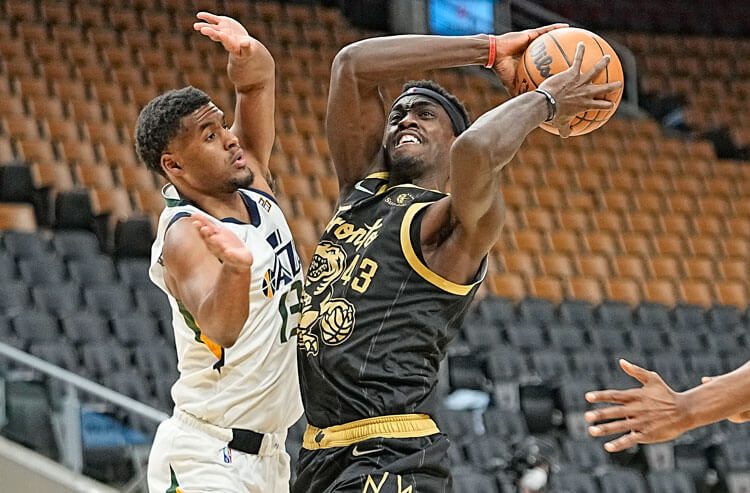 Raptors vs Pistons Picks and Predictions: Toronto's Talent Provides the Edge
Provided by