Even if Anthony Davis' groin injury forces him to sit again for Game 6, the Lakers still have LeBron James, who can fuel the Lakers' attack and force a Game 7 back in Phoenix.

If the NBA betting odds for Game 6 between the Los Angeles Lakers and Phoenix Suns hold any weight, it would appear that Anthony Davis will have minimal impact on the outcome of tonight’s Western Conference quarterfinal game.

The Lakers opened as 3-point home favorites facing elimination and possibly playing without their All-Star forward for a second game after Davis injured his groin midway through Game 4. Early betting action is fading a fragile L.A. team, slimming LeBron James and the Lakers to -2.

Here are our free NBA picks and predictions for Suns vs. Lakers on June 3.

In the no-doubt Game of the Night, Los Angeles opened as a 3-point favorite at BetMGM Nevada, where the line swung all the way to Phoenix -1 briefly. Then it flipped back to Lakers -1 and ultimately returned to L.A. -3, bolstered by news that Anthony Davis (groin) would be back in the lineup tonight. "We just took $100,000 on the Lakers -2, so we're at -3 right now," BetMGM Nevada's Scott Shelton said at 10 p.m. ET. "The line has been creeping up the last two hours. Ticket count is 3/2 in favor of the Lakers, and money is just over 5/1 Lakers. It's been all Lakers money in the past hour." The total fell from 208.5 to 207, then ticked up to 207.5, with ticket count 2/1 and money 4/1 on the Over. "But there's not much going on there," Shelton said.

The Over is 9-2 in Suns’ last 11 road games. Find more NBA betting trends for Suns vs. Lakers.

It didn’t take long for the Lakers to figure out they weren’t winning Game 5. Phoenix jumped out to an eight-point lead after the first quarter and then crushed L.A. 32-10 in the second frame, leaving the Lakers to lick their wounds and bank on a big Game 6 effort back home.

Groin injuries aren’t something you can slap a wad of tape on and play through and, because of that, the chances of Davis suiting up — let alone being effective if he does — are slim. Luckily, the Lakers have LeBron. James was fine playing second fiddle to AD this season but has been a difference maker when he turns up the aggression in this series.

In the Lakers’ two victories (and the loss in Game 4 before Davis went down), James bullied his way into the paint and either scored or created easy buckets. In contrast, he was passive in Game 1 and Game 5, attempting the bulk of his shots from outside. Credit the Suns for plugging up the paint, which has a lot to do with L.A.’s pop-gun perimeter not posing any threat. James also hasn’t been drawing fouls at his normal rate but will be headhunting for whistles at home in Game 6. In short, Phoenix will get full LeBron tonight.

Even at 36, LeBron can fuel this Lakers attack enough to keep Game 6 close — at least with the way the Los Angeles defense plays. Despite what happened in Game 5, the Lakers are an elite defensive group (defensive rating of 106.2 in the postseason) that just won’t let opponents hit those crippling shots from distance.

And because they protect against the 3-pointer so well (on top of playing a methodical pace on offense), opponents have a tough time putting space between them on the scoreboard. The Suns, who finished the regular season with the seventh-best shooting clip from beyond the arc, are making only 32.5 percent of their shots from range in this series, averaging only 10.4 makes from 3-point land.

They’ve played without Davis for extended periods this season and didn’t see their NBA-best defensive prowess dip one tick (defensive rating of 106.8 on the season/106.8 without Davis).

If any other team was on the ropes like this, with their star player out and the offense sputtering to make open looks, you would gladly grab the points with the momentum-hoarding road team. But it’s LeBron and the Lakers — at least for Game 6.

The Lakers definitely need to hit shots or at least hit some early on in order to force the Suns to pay those perimeter players any respect. That will spread out the interior for James to wedge open seams and get to the basket.

The Lakers have called out their own passive approach in these past losses and will be more aggressive, especially when it comes to drawing fouls. Los Angeles was one of the better teams at getting to the stripe in the regular season, recording 16 percent of its total offense from the line.

This series is being played at a lumbering pace rating of 96.10 and Phoenix has been great at getting back on defense and snuffing out L.A.’s transition attack, that rides the rails of the James train (just a 45.1% scoring frequency).

Los Angeles isn’t going to crack the paint or solve this defense playing a halfcourt set against the Suns, so expect LeBron and Dennis Schroder to up the tempo. The Suns were susceptible to pace in the regular season, allowing 1.14 points per play to transition offenses — the ninth most in the NBA.

This total opened 208.5 and slid to 207.5, which is by far the lowest Over/Under of the series. Sure, the Lakers will lean on their defense to stay in this game but they need to score more than 100 points to push this series back to Phoenix for Game 7.

We’re surprised Schroder’s face isn’t plastered all over milk cartons across Southern California considering he’s been missing without a trace the past two games.

After posting point totals of 20 and 24 points in Games 2 and 3, Schroder has totaled only eight points on 3-for-22 shooting in the previous pair of contests, including a fat-ass goose egg in Game 5.

Los Angeles may not be able to get those much-needed 3-pointers from the gritty point guard (shooting 6 for 20 for the series) but Schroder can worm his way inside and had success drawing fouls in the opening three games of the series, knocking down 16 of 20 from the stripe before going ghost from the foul line in Games 4 and 5.

As important as LeBron is to the Lakers escaping elimination at home, Schroder showing up is just as key. 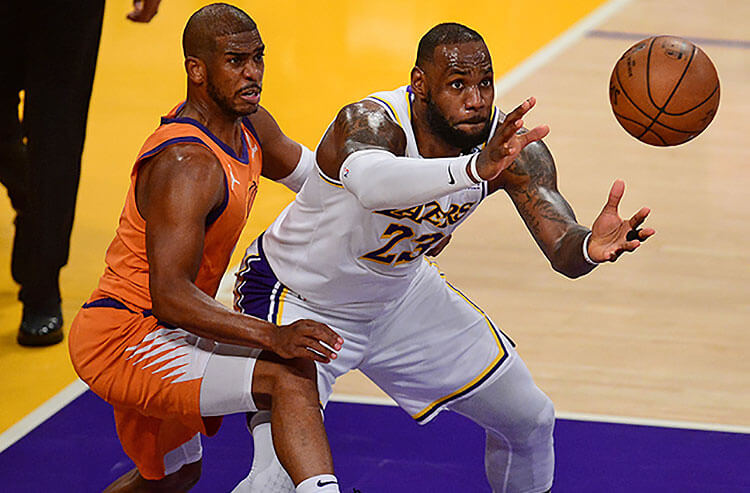 Suns vs Clippers Game 6 Picks and Predictions: How CP3 Got His Groove Back
Zachary Cohen | Jan 1, 0001