Nuggets vs Trail Blazers Game 6 Picks and Predictions: We Need Game 7 in This Series

CJ McCollum had a disappointing Game 5, shooting just 5 for 22. Expect one of the NBA's best second options to put forth a stronger effort at home tonight.

The Denver Nuggets will be looking to advance to the Western Conference semifinals when they face the Portland Trail Blazers at the Moda Center in Portland, Oregon on Thursday, June 3. The Blazers are down 3-2 in this series, which means they’ll be fighting for their playoff lives when this game tips at 8:00 p.m. ET.

Will Portland find a way to force a Game 7 here? You’ll want to keep reading our Nuggets vs. Blazers picks and predictions to find out.

Portland, looking to stave off elimination in Game 6, opened as a 4-point favorite Wednesday morning at William Hill US and made a couple of treks to -5, where the number stands at 5:15 p.m. ET. The Blazers are taking a modest majority of tickets, at 53 percent, but a much larger share of money, at 76 percent. "The sides have been two-way action in terms of tickets, and for the most part it has been the entire series,” WillHill director of trading Nick Bogdanovich said. “We haven’t really had monster decisions in this series, because the teams are so even. The sharps took Denver when it was at 5. Obviously, it's inflated a little because it’s a must-win, so there’s an extra half a point or point being tacked onto Portland." The total dipped from 228.5 to 227, then rebounded to 228, with 88 percent of bets/81 percent of money on the Over. "We’re going to need the Under for sure. Every parlay is on the Over, all the straight money is on the Over," Bogdanovich said.

The Blazers are 5-1 ATS in their last six games following an ATS loss. Find more NBA betting trends for Nuggets vs. Trail Blazers.

The Blazers wasted an all-time playoff performance from Damian Lillard in Game 5. Portland’s star had 55 points and 10 assists on 17-of-24 shooting from the floor and 12-of-12 shooting from deep. He hit clutch shot after clutch shot in that game, but the Nuggets ultimately ended up winning 147-140 in double overtime. In the end, the Blazers just didn’t get enough from their supporting cast, and they now have their backs against the wall heading into this Game 6 at the Moda Center. Despite all of that, Portland has to be feeling good about the NBA betting odds for this game, and its chances of extending this series.

In Game 5, guards Monte Morris and Austin Rivers combined to score 46 points for the Nuggets, and the team also got another nine out of Markus Howard off the bench. All of those players have some punch for this Denver team, but playing at home is a lot easier for guys like that in the postseason. Role players always tend to step it up in front of their own fans in the playoffs, but they can struggle on the road and it’s just highly unlikely that those three players will combine to score anywhere near 55 points in Portland. That alone will give the Blazers a better chance of winning.

Also, don’t expect another 5-of-22 shooting night from CJ McCollum in this game. The 29-year-old is one of the better scorers in the league, and he hasn’t yet found his game in this series. But we’ve seen McCollum go off in high-pressure situations, and the Nuggets have experienced if firsthand. Two years ago, he had 37 points against them in Game 7 of the Western Conference semifinals. Don’t be surprised if he puts on his cape and shows why he is the Robin to Lillard’s Batman.

If it wasn’t for some absolutely nuclear shooting late in the fourth quarter and both overtime periods, Game 5 would have threatened as the second game in a row in this series to go Under the total. And overall, it’s just not a good idea to overreact to seeing that last game went Over, as we know it took some special circumstances for that to happen. This series just hasn’t been all that up and down since the last game in Portland, and it’s hard to imagine that changing moving forward.

As we get deeper into this series, the teams are going to have a better idea of how to stop one another, and toughness will come into play when deciding who advances to the next round. Look for both teams to pride themselves on getting stops here.

Robert Covington hit three triples in Game 5, which gives him at least two in three of the five games in this series. The forward is always going to play big minutes because of the two-way impact he has for his team, and he takes enough outside shots to make this a good value play.

Covington has taken 11 threes over the last two games, and he’ll have the green light to let them fly in Game 6. Don’t be surprised if he plays a huge role in helping Portland win this game. 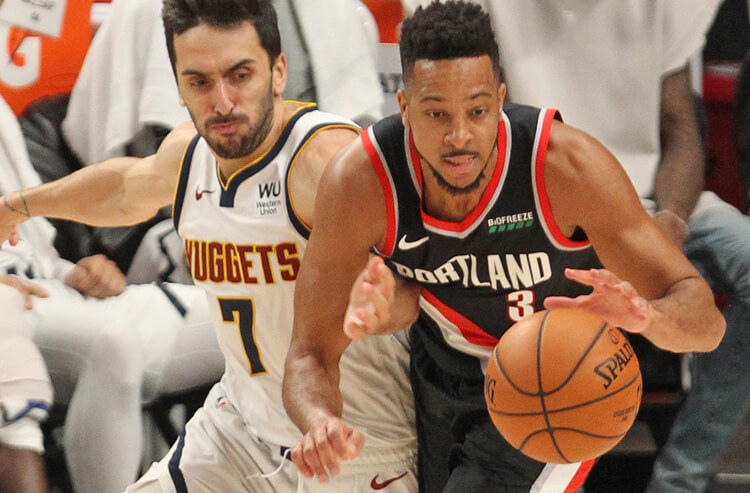 Nuggets vs Trail Blazers Game 6 Picks and Predictions: We Need Game 7 in This Series
Provided by