Today's daily NBA player prop picks for January 3 feature the greatest shooter ever to continue lighting it up, Joel Embiid to feast against the poor Rockets defense, and more. Read more below.

The NBA rolls on into the New Year with 10 games on the schedule for the first Monday of 2022 which means there is a cornucopia of betting options when it comes to the player prop market.

Today, we focus on a betting situation we just can’t say no to, getting plus money with a Steph Curry made threes prop. But that is what is exactly on the board as Curry and the Golden State Warriors host the Miami Heat.

Check out our NBA player prop picks for Saturday, January 3, as we bank on some of the NBA's best to do their thing.

The Washington Wizards are coming off a heartbreaking last-second defeat at the hands of the Chicago Bulls as DeMar DeRozan hit a game-winning three at the buzzer on New Year’s Day. But the Wizards will look to put that behind them when they host the Charlotte Hornets on Monday night.

The Wiz are still shorthanded as a bunch of players are still in health and safety protocols but one player who has come off that list firing has been guard Kentavious Caldwell-Pope. The shooting guard has gone 7-for-16 from 3-point range in his two games back since missing three games with COVID.

Now, Caldwell-Pope gets to face a Hornets team that has some really exciting guard play, but at the same time is one of the worst at defending the perimeter in the NBA. Charlotte allows the second most 3-point attempts per game while ranking 24th in opponent 3-point shooting percentage.

With the Wizards still dealing with a bunch of players on the COVID list, Caldwell-Pope has taken it on himself to shoot more threes. He is putting up 7.0 threes per game over his last six games up from his season average of 5.5.

On top of that, Caldwell-Pope has nailed three or more threes eight times over his last 13 games, so getting plus money on his Over 2.5 made threes prop in this matchup looks like great value.

Pick: Kentavious Caldwell-Pope Over 2.5 made threes (+125 at DraftKings)

The Philadelphia 76ers are pulling themselves out of a rough patch and enter tonight’s matchup with the Houston Rockets having won three games in a row and a big reason for that has been, of course, the play of All-Star center Joel Embiid.

Embiid has poured in 35.4 points per game over the Sixers' last three contests while shooting 53.8 percent from the floor leading Philly to three straight wins. Now, Embiid should get to feast against a Rockets defense that has had its issues with opposing big men.

Houston ranks 27th in the NBA when it comes to opponent’s points in the paint. That’s on top of ranking 29th in defensive rating and 25th in opponent field goal percentage.

At 25.5, Embiid’s point total seems like a little bit of a trap. But with him going for 32 points or more five times over the last six games. Bet him to keep rolling against a Rockets team that has had its fair share of problems in the paint.

Anytime you can get plus money with a made threes prop for the greatest three-point shooter in NBA history, you take it. And that’s exactly what’s on the board as Steph Curry and the Golden State Warriors host the Miami Heat.

Now, the Heat are usually known for being a solid defensive bunch but this version of the Heat has struggled on the perimeter. The Heat give up the third-most threes per game in the NBA and rank 27th in opponent made threes per game, giving up 13.6 per contest.

Curry is always a threat to go off, but he is hitting 42.9 percent of his 3-point attempts over the last four games, going 24-for-56. He has also hit six or more threes 13 times over his last 24 games. So, once again, getting plus money on Steph to cook seems like a no-brainer. 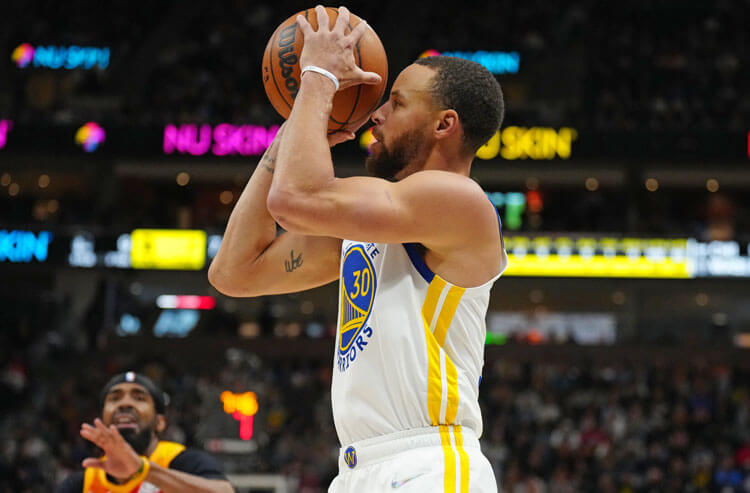